Showing posts from April, 2007
Show All 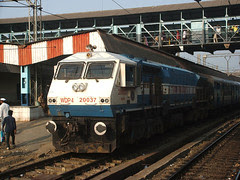 This day was probably my last trip to college! (Atleast in the morning!). I was happy to be in the 0658 EMU sitting near a window and staring aimlessly at the now familiar stretch from Belapur to Kurla. I reached Kurla at around 0735. The Mumbai bound Vidharbha Express rushed past with a WCAM3 in charge. The train had 24 coaches. Sometime later the Pune bound Deccan also rushed past with a WCG2 in charge. I was about to take a pic, but the pointsman jumped in between, and taking a photo would have been meaning less! My EMU pulled in, and luckily the coach I travelled in was new! I enjoyed the journey through out, and spotted the Devgiri express with a Green coloured Pune WDM3A. I reached Thane, and was simply overjoyed to see the Mandovi still waiting there. The loco... ...was WDP4 #20037 of Krishnarajapuram. I rushed out, and went to college. I finished off my exam at 1400, and left college by 1515 after having some food from the Canteen. I reached Thane station at around 1600. Rat
1 comment
Read more 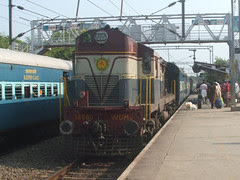 1. Down journey was by 6345 Netravati Express. The loco in charge was WDM3A #18555 of Erode. (Photo posted in Update 1). The coach was AS3 (WGACCN 05908 based at TVC). 2. I made a short trip to Bangalore. Left Trichur on 07 April in the night by Kallada Volvo (KA 03 AC 2000). The journey was comfortable. Travelogue coming soon. 3. Returned from Bangalore by Car. I drove for about 60% of the distance. 4. Departed from Trichur on 13 April by 6346 Netravati Express. The loco was WDM3A #14080 of Erode (Image above). The coach was AS1 (WGACCN 05138 based at TVC). The train departed from TCR at 1618, late by 28 minutes, and arrived Panvel at 1550, late by 35 minutes. Travelogues from this journey will come up very soon. I am currently busy with my practical examinations. Photos from the return journey is uploaded here . Photos of the down journey, and some other miscellaneous railfanning images will be uploaded soon. The CD in which I had saved them got corrupted, and I am trying to retri
Post a comment
Read more 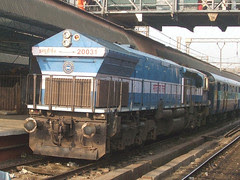 My travels to my college almost approaches its end! The days are now numbered. Today was the second last, and Thursday marks the last day!!!! I took my regular train once again today, and made it to Kurla by 0735. Just as my train was pulling into Kurla, a WCG2 zoomed out of the station with the Pune bound Deccan Express. I jumped of the EMU and rushed to Platform 5. My EMU pulled in right on time. We crossed the Latur-Mumbai express near Ghatkopar. The journey ahead was normal. Just as the EMU was pulling into Thane, I spotted the Mandovi waiting there! The loco in charge was... ...WDP4 #20031 of Krishnarajapuram. The loco looked tired, and the train got its starter about a minute after I clicked the image! The rest of the journey to college was plain. I had an examination, and that too was normal! In the evening, While entering Thane the Pune bound Pragati Express zipped past with a WCG2 in charge. Some time later, a Pune WDG3A (in turquoise livery) pulled into the station with t
Post a comment
Read more

April 16, 2007
Not really! I went back to college once again today - to attend a Practical examination held by the university of Mumbai! The journey was normal but unusually looked different! It was the same old route via Kurla, but everything seemed different - To begin with: I spotted the new "Solapur-Mumbai-Kolhapur Siddheshwar/Mahalaxmi Express". The loco was a WCG2. Right behind this fellow was the Matsyagandha Express, and behind her was Devgiri Express. Mandovi had WDP4 #20034. The rest was normal. The examination was sort of boring, and quite monotonous! In the evening, I spotted Pragati Express with a WCG2 and the Nagpur bound Nandigram Express with a WDG3A (probably of Pune). Update: It has been confirmed that the Mumbai-Latur-Mumbai Tri-Weekly express gets a Kalyan WDM2 for its entire journey - So that becomes the longest and the only regular express link worked by Kalyan DLS - Kudos to the staff there! Thats all for the day - Bye!
Post a comment
Read more 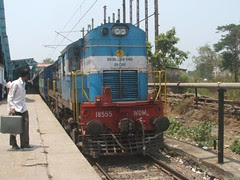 So here goes Update 1... The loco that worked 6345 LTT - Trivandrum Netravati Express was WDM3A #18555 from Erode (all the way). The train left Panvel at 1320, delayed by 25 minutes, and reached Thrissur at 1250, delayed by about 30 minutes. Not much about the journey... Will put up more details on reaching back in Mumbai! An unexpected turn to the journey... I made an unexpected dash to Bangalore! I left on April 07 in the night by a VOLVO bus operated by a leading private operator - Kallada. The bus was KA 03 AC 2000. It was a Semi-Sleeper bus, and I had a seat right behind the "helper's" seat i.e., Seat Number 03. The nearby seat too was empty throughout the journey! I'll return to Trichur on 10 April by Car...more later!
Post a comment
Read more

Just as I had reported a few days earlier, My grandpa passed off on Sunday (April 01). This sad occasion sees me traveling to Kerala once again! I am leaving tomorrow by 6345 Netravati Express, and am expected to reach back in Mumbai by Saturday/Sunday i.e., 14/15 April 2007. I'll surely try to update this blog in between, but it all depends......Do keep visiting often!
Post a comment
Read more

After a long sustained spell of Railfanning, now its time for Busfanning! Busfanning is quite different from Railfanning. In railfanning, you have specific aims with a time frame. In case of busfanning you can have none! I usually go in search of specific buses, which sometimes never turn up! I had nothing to do at home, and decided to spend some time on the road. I started my session at around 0929. I was welcomed by a 'failed' bus lying ahead. Poor passengers were waiting for the next bus... ...and many buses of the same operator - MSRTC - went without stopping! It was all dry later until I saw this... ...That is a new model bus from NWKRTC - North Western Karnataka Road Transport Corporation. The bus had colour similar to a TATA Starbus! I was sad that I couldn't see its face! Some time later, an old model Express bus went past... It became all dry after that. All of a sudden, I noticed a white bus on the other side of the road, and that was... ...the new des
Post a comment
Read more 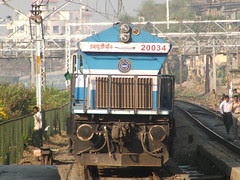 Today was the last official working day for us final years at college! I day was off to a rather lazy start! I was unable to jump out of the bed even at 0615. I some how managed to get up, and took the 0737 EMU. I got down at Kurla, and decided to wait till the WDP4 combo (Udyan Express, closely followed by Pushpak Express - Both headed by WDP4s!) rushes through! The first WDP4 came in without much of a warning, other than a bray near the outer signal! The loco was... ...WDP4 #20034 working the Bangalore bound Udyan Express. Shortly after Udyan went, came in the Pushpak Express. This train is 24 coaches long, and CR is making good advantage of the WDP4 which otherwise would simply doze off in the yard! The loco... ...was WDP4 #20037 - The newest one to be seen in Mumbai! Just as I was waiting for my EMU after the double whammy, WCAM3 #21882 rushed towards CSTM with the Vidarbha Express in tow. The train had 25 coaches including: 2 SLR, 4 GS, 12 Sleeper, 6 AC coaches and 1 touris
Post a comment
Read more

The day with a sad note! 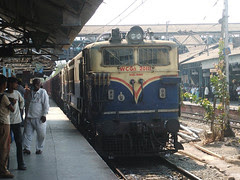 Myself trying to recover from a shock of losing a very near relative (my grandpa), had to witness another grief filled moment today! I was to take the 0658 EMU in the morning. But since I hadn't slept since Sunday, i couldn't resist sleeping till 0620. Finally I decided to take the 0737 EMU. I reached the station only at 0734, and the seats were already full. I decided to stay at the door. I got down at Vashi and took a ticket on the Thane train, and changed over. The coach was 76353 (the leading driving cab). The train was more or less empty while leaving from Vashi (but filled up 2 kms down the line at Sanpada). The train was first held up at Koparkhairane Outer since a Freighter was crossing over into Koparkhairane-APMC Yard. The loco were twin MU-ed WCG2s. We lost about 10 minutes waiting there! The motorman tried to somehow adjust some time, and he was driving at the MPS of 80 kmph. We crossed Ghansoli, and everything normal. Just after Ghansoli advanced starter, I head th
1 comment
Read more

April 03, 2007
Just as I posted earlier, the holy soul left this place at 2130 on Sunday. His body was cremated with full religious rituals on Monday, April 02, 2007 at 1200, at our Ancestral house at Pullut, Kodungallur Taluk, Trissur District, Kerala. I unfortunately could not take part in the rituals, since I could not manage to get tickets on any of the Cochin (the nearest airport) bound flights! So, I am back here in Mumbai. But would be leaving on Saturday, April 06 2007 to take part in the rituals that are usually done on the 11th & 12 th day of death as per our Tradition.
Post a comment
Read more In remembrance of this holy soul - Sankaran Embranthiri, my paternal Grand Father. He left for his heavenly abode just hours back (At 2100)...he is no more in this world! He was 90 at the time of death. He died due to Cardiac Arrest. His body would be cremated tomorrow after our family reaches there... May his soul rest in peace! In solitude to this heart breaking news, there would be no update to this blog atleast for the next three days. I am leaving urgently to my Native place (Kodungallur in Kerala) by the first available flight. Please bear with me for this interruption. Hoping to be back to track very soon...
Post a comment
Read more 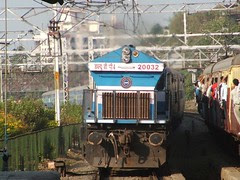