Showing posts from May, 2012
Show All

After a sleepless night, I was sitting at the front seat of an MTC bus headed to Ambattur from Broadway. I love the design of MTC buses – very functional and fairly spacious. Just as the bus approached Central, I receive a call on my phone – an interview that I had attended in Bangalore was positive. Now, that was the icing on my cake – two job-offers together, and it was no secret that I chose the one I felt was the best. I now had to head to Bangalore to take up my new assignment. A quick round of calls to my family followed, and I confirmed to my new employer in Bangalore that I would join them at the earliest. The hunt for a ticket to Bangalore just began. I browsed the KSRTC website over phone and found that tickets were available. However, due to the awfully low speed on the GPRS connection, it wasn’t a very good idea to book over phone. I called up my brother in Bangalore, and he booked the tickets for me. The bus was the 1530 Chennai-Hubli Airavat Gold Class. Jayasanka
4 comments
Read more

Bed-bugs, cockroaches and a dead AC: Tale of a train journey

May 26, 2012
End of April: I was beaming in joy as I received an offer letter for a major newspaper company in South India, offering me a job in their editorial department. The posting was in Tamil Nadu, with training at Chennai. I decided to take up the job, and accepted the offer. I was to join in the first week of May, but certain personal commitments made me postpone the date to mid May. (It is a different matter that I   did not join the job at all at a later stage) I had the option of taking a bus or a train from my place to Chennai – I initially planned to take the bus, but later changed my mind to take a bus due to the amount of luggage I would be carrying. I booked the ticket at the newly opened railway ticket reservation counter at my hometown, Kodungallur. I took a ticket in 2A of 12696 Trivandrum-Chennai Central Superfast – I still do not know why I booked this train. The ticket was waitlisted – WL16. Days passed quickly. The ticket did not move even a bit for about a week. Ove
2 comments
Read more 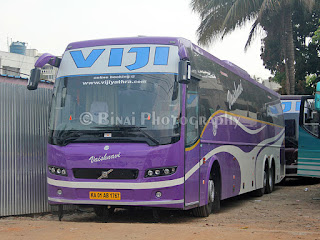 May 03, 2012: My quick visit to Bangalore was heading to a close. I was desperately looking for tickets to return home. Thursday night plus summer holidays meant that almost every bus to Kerala was running full! I tried every operators’ website, but every bus was either full, or had only the last row seats empty. The story was same for Karnataka SRTC as well. I decided to check out the travel agents in Madiwala area. I headed first to Friends Travels – Kallada G4’s bus was full by then. Then went to Shama – they were full as well. Then tried a handful of operators including Kallada (Suresh Kallada), KPN, Viji, etc – all of them had tickets only to Thrissur bypass. Getting off at Thrissur bus at 4 or 5 in the morning is a nightmare – public transportation would wake up only after 5:30 or 6 in the morning. I decided to return home empty handed, and may be try out my luck with some train (yeah... a bit over-ambitious for sure). After returning home, I checked the railway site and w
2 comments
Read more 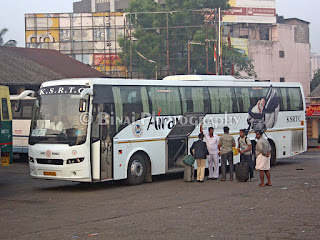 A day after returning from Hyderabad, I was busy looking at options to head back home. The last time, I took Kallada. This time, I decided to try the Airavat Club Class to Thrissur. It took time to finalize, and finally booked the ticket online. I selected my new favorite seat, #16. The bus was mostly empty at the time I booked the ticket (the day prior to my journey). April 02, 2012: The evening of journey. For the first time, I did not ever remember to get a print-out of the ticket. I left from home at around 2000hrs for a 2110 departure (pretty late). My brother dropped me outside the bus station at around 2050hrs – my bus was standing there all set to move. I showed my m-ticket to the conductor, left the baggage in the boot and got into the bus. My co-passenger was already there. The load was looking impressive – not less than 40 seats, on a Monday from Bangalore! Just as the clock ticket 2110, the crew at the bus station remembered that they had parcels to load! Load
4 comments
Read more 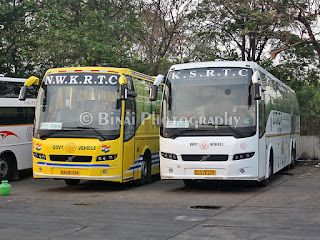 March 30, 2012: After a tiring day in Hyderabad, I was looking at my options to return to Bangalore. I called my brother in Bangalore to check availability of tickets in Karnataka SRTC for that night. He couldn’t book online due to some issues with the reservation website. I now asked my cab driver to head straight to Hyderabad Mahatma Gandhi Bus Station. I first went to the APSRTC counter to see if there were tickets in the Vennela Sleeper – but only upper berths were vacant. I went to the KSRTC counter to check for tickets in their evening buses. I specifically asked for a Multi-axle Volvo – he issued tickets for the “2001HYDBNG” Airavat Club Class bus. I was looking for a bus later in the night, but he was adamant to sell this bus. I got a right side window seat, and headed back to my hotel room in my cab. After a quick bath, I asked the same cabbie to drop me back at MGBS. I reached MGBS at around 1900hrs. I walked around the bus station to click some pictures – but did n
Post a comment
Read more
More posts