Showing posts from January, 2011
Show All

The beauty of corporate press releases

January 22, 2011
The Public Relations department in any company is often an "unproductive" unit, and the staff in those units are usually seen with sarcasm. The main work done by PR Department is issue press releases, reply to queries from customers (often the department only forwards the mails to the appropriate department) and design/approve advertisements. As evident, this department has very little job to do, and is often run with skeletal staff. Here is a clever copy-paste job done by the PR department of a major automobile company in India. This company launched their Intercity coaches a couple of years back, with the tag line "Travel with the Star". This tag line is often cheaply pasted along the length of the company. This is the press release issued by the company on October 07, 2009 (read the original here ) “We at APSRTC constantly endeavour to provide our customers the best in terms of luxury, comfort, safety & technology. Thus, Mercedes-Benz buses emerged as
2 comments
Read more 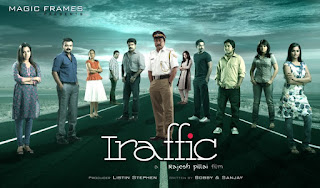 A gripping story keeping viewers glue to their seats through for two hours, without leaving time for second thought - not a moment to worry spending money on the movie - this is what would describe the latest Malayalam flick Traffic. The movie, directed by Rajesh Pillai, was written by brothers Bobby and Sanjay. The feature film has Sreenivasan, Rahman, Kunchako Boban, Asif Ali, Anoop Menon, Vineeth Sreenivasan, Sandhya, Roma and Remya Nambeesan playing important roles. All the actors in the movie have an equally important role to play, and all of them have performed to their best.  The movie revolves around happenings on a single day - September 16. The movie has a few flashbacks to make story telling easier. This movie too revolves around the "play and replay" format, which helps viewers get a better idea of the story. Certain scenes are first shown in a particular angle, and later in different angles, which reveal more twists in the story. The movie has a lot of side tra
1 comment
Read more

The underutilised potential of Inland waterways...

Kerala, true to its name " God's Own Country ", is gifted with over 1600 kms of navigable inland waterways across 41 rivers. Kerala is among those states which have realised the potential of inland waterways. The state has a dedicated company to run transportation services across Inland waterways in the state - the Kerala Shipping and Inland Navigation Corporation (KSINC). This company operates cargo services within the state, while the State Water Transport Department (SWTD) is responsible for passenger ferry services in the state. The 181-km long National Waterway 3 (from Kottapuram in Thrissur district to Kollam) is one of the premier inland navigation channels in Kerala. The Inland Waterways Authority of India (IWAI) is planning to extend the West Cost Channel all the way to Hosdurg in Kasaragod District in the North and Kovalam in Trivandrum District in the south, which will make it a 560-km inland channel. The SWTD is based at Alappuzha, and operates passenger
2 comments
Read more

Back in October 2010, I had to visit Kottarakkara for some family reasons. It was a day's job and we (I and my dad) decided to leave early in the morning and be back by night. We ruled out driving down to the place due to the horrible state of roads, and taking the bus was a natural choice. Both of us enjoy traveling in the bus, and ruling out the train was a no-brainer. Accordingly, we decided to take the morning Volvo (7 AM) from Ernakulam to Kollam, and then take a local bus to Kottarakkara. Both of us headed out from home around 5 in the morning on our car on October 3, 2010 - our plan was to leave our car at the railway station (Thankfully, KSRTC does not have parking lots at bus stations) and then take a rick to the bus station. We reached the bus station by around 6.30. I kept wandering around the bus station, while waiting for our bus to turn up. Around 6.50, I decided to enquire about when would be bus be brought. I was shocked at the reply - the bus has been cancelled!
1 comment
Read more 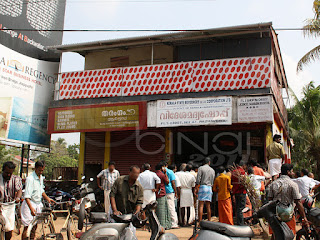 Kerala gained a new name recently: " Tippler's own country ". The name comes at a befitting time, when Kerala just won the first place in consumption of liquor in the country. The per capita consumption of Keralites was recently found to be a whopping 8.3 litres, equalling the record of the US! Malayalees enjoy a special pride in queuing up to get that righteous bottle of their favorite spirit. The fact that the entire wholesale and retail sale of Liquor in Kerala is handled solely by agencies appointed by the State Government, makes it mandatory for people to queue up. The sales of Indian Made Foreign Liquor (IMFL) is done through outlets managed by the Kerala State Beverages Corporation (KSBC) and Consumerfed (Kerala State Co.Operative Consumers' Federation Ltd).  People purchase liquor with the same patience (or even better) as they queue up outside a ration shop. A queue outside a Beverages Corporation outlet in Alappuzha. This queue is too small though. Ma
Post a comment
Read more
More posts