Showing posts from September, 2009
Show All

September 19, 2009
Its been five days since my college days restarted. I last attended a college back in April 2007 - and those were days of fun and enjoyment - far from the burdens of life. After two years of freedom (as some may call) that a job gives, its back to the world of classrooms and assignments. The first day at College - September 15, 2009 - went about without much fuss or work. There was a long drawn "inauguration" function - welcoming the second batch of M Pharm students to the college (in fact, it was the first batch in two specialisations), peppered with speeches and advices from a range of experts who occupy the highest offices at the Health Care campus of Amrita Vishwavidyapeetham. The Principal discussed our syllabus, and also gave some clue of what lies in store for us. The day ended sitting at the library searching for volumes that I remember seeing at my old college. The second day was no different - just as the function wasn't there. Lectures started on the second
1 comment
Read more

September 15, 2009
After a long two-year break from studies, I am finally back to college. I am pursuing Masters in Pharmacy (specialising in Hospital & Clinical Pharmacy) at Amrita School of Pharmacy (under Amrita Vishwa Vidyapeetham, deemed university) Edappalli, Kochi, Kerala. Its a two year programme, with one year for theoretical studies and one for thesis/research work along with an internship at the Amrita Institute of Medical Sciences (A 1200-bed super-speciality, tertiary referral hospital in Ernakulam). Ours is a batch of 10 students (there are two more specialisations, with 10 students each). There was a long inaugural session, and a mandatory visit to the Library. The inaugural session was interesting - and boring - in every manner. A few words about the institution - the institution is affiliated to Amrita Vishwa Vidyapeetham Deemed University. The University was recently accredited with an "A" rating by the NAAC. The University was founded by Shri Mata Amritananda Mayi (fo
Post a comment
Read more

September 12, 2009
The City bus service in Ernakulam - the Commercial Capital of Kerala - is handled almost exclusively by Private buses. Official records show that there are over 900 buses serving the city and its suburbs - extending from Thripunithura to Cheranalloor and Thevara/Fort Kochi to Aluva. The sheer number of buses provide an amazing connectivity within the city, with frequencies as good as a minute between two buses! However, the amazing frequency has led to unhealthy competition among bus operators - and finally ends up in buses running at speeds putting even F1 drivers to shame. It is no secret that these private buses run on a mix of Kerosene and Diesel (obviously for saving on fuel money - only to spend more on engine repairs). In addition to cutting costs, the mix also allows buses to pick speed much faster than a bus running purely on diesel. Each bus runs with about 3-4 crew members manning it - including one driver and two conductors. The crew are usually at tenterhooks, because an
Post a comment
Read more

The 'RailKerala' meet: At Pattambi 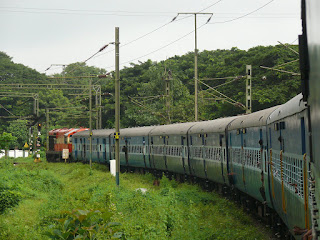 It has been a tradition of RailKerala - a group of Railfans in Kerala, often called a 'sub-group' of the Indian Railways Fans Club (IRFCA) - to have a get together every year, since 2007. We usual get together in October every year, usually at Ernakulam. We decided to have something different this year - meet in September, perhaps at a different location. Long discussions later, Kozhikode was chosen as our place of meet. However, attendees started withdrawing one by one, and a spot closer to Shoranur was chosen. Pattambi got the toss. Pattambi is 12 kilometres from Shoranur, on the Shoranur-Mangalore Railway Line. The station is located on the banks of the river Bharathapuzha and is in the middle of a couple of nice curves. The location was studied using Google Earth, and we checked for connectivity in detail. So Pattambi, it was! RailKeralites were to assemble at Shoranur Station at 9 AM on Saturday, September 05, 2009. I planned to take the 6305 Kannur Intercity to reach Sh
1 comment
Read more 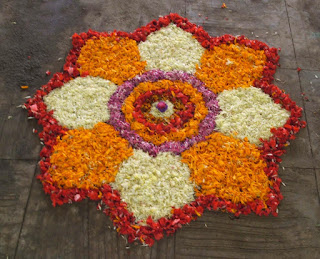 Thiruvonam is finally here! Putting an end to 10-days of festivities, Thiruvonam is here. Onam is celebrated to mark the Harvest season, and also to welcome the mythical king Mahabali is regarded as the best ruler the state has ever seen. History has it that Mahabali was an Asura (or Devil) and he ruled over all the three worlds, including the Devas . Annoyed by this, the Devas approached Lord Vishnu for help. It is said that Lord Vishnu approached Mahabali in his Vamana avatar. Mahabali was performing a Yagna at that time, and he had promised to fulfill the needs of any one approaching him. Taking advantage of the situation, Vamana said to Mahabali , " You need not give me anything great. It is enough if you give me that extend of land covered by three footsteps of mine ". Although Mahabali was warned by the sages performing the Yagna that Vamana was an avatar of a Deva and the statement was a trap . Mahabali, determined to keep up his promise, begged pardon from
2 comments
Read more
More posts