Showing posts from September, 2007
Show All

September 30, 2007
Reached panvel at around 9.30. There is good crowd waiting for my train. All arrivals from KR are delayed by 40-45 minutes. More will be posted tomorrow
Post a comment
Read more

Yet another October comes around, and yet another trip dawns! This trip too is now becoming an unbroken tradition. The route for this year's journey is as below: The trip begins at Belapur on September 29 (Today) at 2100. We'll (I and my parents) would proceed to Panvel, and take the 6338 Okha-Ernakulam Express to Kasaragode in Kerala. We'll attend a function on October 01, and then proceed to Kannur. We'll proceed to Alappuzha on October 02 from there. On October 05, we'll be back at Kodungallur. On October 07, we'll reach back at Bangalore via Coimbatore, Satyamangalam, Mysore. We'll take the 6340 Mumbai Express from Krishnarajapuram on October 09, 2007. We'll alight at Pune and take a bus back to Belapur. So that is a 3000-odd kilometre journey to be covered in 11 days! It appears to be pretty tight since not a very good news is being heard about the roads in Kerala! Looking forward to cover the journey absolutely safely. So stay tuned right her
Post a comment
Read more

Sunday under the wires... Part 2 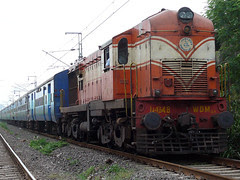 After that unsuccessful search for a brunch, we were back besides the track. Just about 2-3 minutes after reaching there, we heard a "diesel" horn, and were anxiously looking out to who blew that! Some minutes later, WDM2 #16565 of Ernakulam rushed past with the Hazrat Nizamuddin bound Mangala Express. The train was around an hour late. There was absolutely no spottings during the next 25 minutes, and we were busy discussing about loco classes, and were sadly looking at the passengers who were still waiting for the passenger train at the station. Some time later, WCAG1 #21979 returned back towards Diva working light (again!). Mayur was longing to see a WDG3A, and his prayers were sort of answered when a light WDG3A rushed towards Panvel a little after the WCAG1. The loco was WDG3A #14559 of Kalyan. We decided to move out after spotting Matsyagandha Express. Matsyagandha Express, bound to Mangalore, was worked by WDM3A #14048 of Ernakulam and came in around 1514. This loc
Post a comment
Read more

Sunday under the wires... 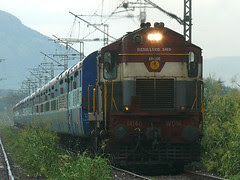 Prelude: It was a Saturday noon, and I my mobile cried out aloud. That was Karan Desai of IRFCA, Mumbai. He was planning a railfanning at Panvel - My own territory! I was quick to suggest an alternative, and we decided to head off there in the morning. Mayur was to join us at Vashi, and I took my car along. We met at Vashi Station at around 0930. Karan updated that the Madgaon bound Mandovi was waiting at Thane even at 0900! We left in a matter of a couple of minutes, and I hit a comfortable 80 in a few minutes on the Panvel State highway. We took a left turn at Kalamboli, and hit towards Taloja on NH4. We made it there at around 1000. We were just roaming around for a good job to park my car, when WDP4 #20030 rushed past working SHF with the Madgaon bound Mandovi Express - THAT WAS REAL HARD LUCK! We were totally disgusted, and slowly walked towards the tracks, just about 50 metres from where I parked by car! Passengers waiting on the platform of the nearby Navade Road railway statio
Post a comment
Read more

Unscheduled halts on the DIVA-PNVL Line...

This is one post that I had been planning for a pretty long time now. I thought of putting it up while I was killing time hearing songs on my PC today. The 101 kilometre long Diva-Panvel-Roha branch line of Central Railway's Mumbai division has about 17 authorised halts, and 3 unscheduled halts. By "Scheduled" halts, I mean stations which are listed in the timetable. Of the 17 halts, 5 stations are mere 'halt' stations i.e., stations without loop lines. The 26 kilometre section between Diva and Panvel has 7 "scheduled" stations (including both ends) and three "unscheduled" stations. The first Unscheduled station is Agasan. This "halt" comes at kilometre 45/4 (distances ex-CSTM). This halt is between Dativali and Nilaje. Dativali is at 44/4, while Nilaje is at around 47/something. The next unscheduled halt is at 51/4, between Nilaje and Taloja stations. I couldn't find any name boards for this one (I'll try out once again
Post a comment
Read more 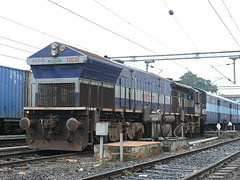 I had some work at Thane, and I left my home at around 0930. I took the 1033 Thane EMU from Sanpada, and reached Thane at around 1100. It started pouring down as I reached Thane. I, hence, decided to wait for some time at the station itself. I went over to Platform 7 and stood at the CST end. Just as I entered Platform 7, announcements were made that the Sahyadri Express from Kolhapur is arriving on Platform 7. The train turned up at 1114 with WCG2 #20117. The train was given the starter almost immediately after she halted! This train usually gets overtaken by Sewagram Express here. The Nagpur-Dadar Sewagram Express turned up after the Sahyadri went out. The loco in charge of Sewagram was WCAM3 #21941. Just as Sewagram started moving out of the station, I spotted WCAM3 #21960 waiting at the home signal with the Chhapra Express in tow. The train had to wait for about 3 minutes at the signal, since a Fast EMU was halting on Platform 5. Just as Chhapra Express cleared the station, WDG3A
Post a comment
Read more

The New face of NMMT

Navi Mumbai Municipal Transport a.k.a NMMT, is a local Municipal Corporation run Transport Organisation serving passengers commuting in Navi Mumbai and to areas like Thane, Dombivli, Badlapur, Mulund, Panvel and Uran. The organisation began bus services in 1996 with an initial fleet of 25 buses. Today, the organisation operates 39 routes with a fleet of around 285 buses based out of two operational depots. NMMT depots are located at Turbhe (near Vashi) and at Asudgaon (near Panvel). Older NMMT buses bear the "MH04" registration mark, while the newer ones bear the "MH43" mark. There are around 200 buses bearing the MHO4 mark, while the remaining ones bear MH43 numbers (Numbers: MH43-H-5001 till 5085). All NMMT buses have an Ashok Leyland Chassis. The initial 170 buses have water-cooled Leyland Engines, while the around 30 buses have Hino Bharat-I engines. All the buses bearing the MH43 mark are Hino Bharat-II engine powered. Asudgaon depot was opened sometime in the
2 comments
Read more

To Thane after a break... 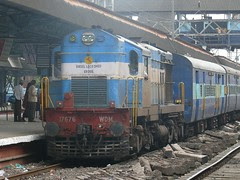 I had to leave my car at the workshop for some urgent repairs. After dropping the car there, I reached Thane station at around 1345. I purchased a ticket to Panvel on Matsyagandha Express. I reached the platform at around 1350. As I was walking down to the platform, announcements were made that the Coimbatore-LTT Express was running late by an hour, and so was the Varanasi-Mumbai Mahanagari Express. The Ratnagiri-Dadar Passenger was scheduled to arrive soon on Platform 7. A few minutes later, WDM2 #17739 of Pune - in a very bad condition - pulled in with the passenger. The loco was in brown livery last year, and even the new livery showed signs of the old livery. Just as the passenger cleared in, WDM2 #18354 and #17608 of Kalyan pulled in with a TP rake. The train came to a dead halt a bit before the starter (the starter was red). Just as the loco stopped, the signal turned green. A pointsman rushed to hand over a few caution orders. The loco notched up, and maximum power was applied
Post a comment
Read more 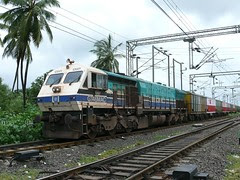 Panvel is always a weakness for me! Here I go once again... I reached Panvel at around 1200. The station seemed to be too crowded, with many departures running much delayed. The "late" runners list was getting longer by the minute, and the Ernakulam-Jaipur Marusagar Express topped the list by running late by 16 hours! Mangala Express (Ernakulam bound) was the next with a delay of 8 hours, Madgaon bound Mandovi Express by 5 hours and the Nizamuddin bound Mangala Express with a delay of 2 hours! The first arrival after I reached there was a freight train hauled by Kalyan WDG3A #14595. That was a BTPN rake bound to Navghar HPCL Siding returning after unloading Naphtha at RCF at Thal. After this rake came in, annoucements were made regarding the arrival of the Trivandrum bound Netravati Express. Netravati came in at 1300 with WDM2 #16885 of Ernakulam in charge. The KR4 Ratnagiri Dadar Passenger came at around 1315, with WDM3A #17687R of Pune in charge. After both trains left,
Post a comment
Read more

Sunday on the SE line...Part 2 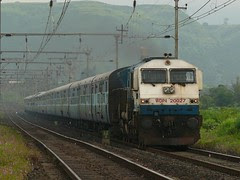 We reached Shelu after a very short 5 minute ride. While riding the EMU itself, we decided on the spot where we should stand for further railfanning. After getting down at Shelu, we walked a few metres, may be around 100-odd metres, towards Neral. The tracks makes up a rough "S" shaped curve, and then about a kilometre of straight track, punctuated by a sharp left curve. In the straight section, there is a down gradient quickly followed by an up gradient. (This description as seen while standing at Shelu looking towards Neral). Myself and Karan decided to stay near an OHE pole which gave us ample room to be safe if a train came on the UP line. Out first target was the Kanyakumari Express. Shortly after we reached there, an EMU rushed towards Khopoli. Some minutes after the EMU went, the Kanyakumari Express rushed through with WCAM3 #21981 in charge. After the Kanyakumari Express went past, Arzan called up Karan and asked us to join them. (They had walked a few metres further
Post a comment
Read more

Sunday on the SE line...Part 1 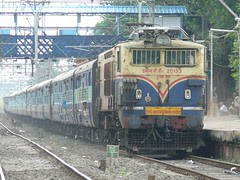 Prelude: SE Line or the "South East" Line is a part of Central Railway's Mumbai Division. The SE line is from Kalyan to Pune running across the Bhore Ghats. Suburban EMU services exist upto Karjat, and then on to Khopoli through a branch line. The major stations on this suburban are Ambernath, Badlapur, Neral and Karjat. A team of Four IRFCA Mumbai members, viz, Arzan Kotval, Anamitra, Binai Sankar (Myself), and Karan Desai decided to explore this line for the sheer high speed action it has to offer. A Karjat Fast EMU was decided as our outbound train. Arzan was to take the train from Dadar, Myself from Kurla, and the remaining two guys from Thane. This trip was undertaken on September 02, 2007. I left my home at around 1145, and took the 1214 EMU from Belapur. We had purchased Tourist tickets to make our life easier! I reached Kurla at around 1250. Shortly after I reached there, WCG2 #20117 rushed towards CSTM with the Hyderabad-Mumbai Express. Some minutes later, WCG2
Post a comment
Read more
More posts