Showing posts from May, 2008
Show All

My recent visit to Mumbai had a very huge surprise in store for me! BEST is now operating an Air Conditioned bus service to Navi Mumbai. The service is between Bandra-Kurla Complex and CBD Belapur on Route number "A-505". I decided to try out the service this time. I checked out the timing of the bus service at Belapur on 21-May evening. The bus was at 19.05. I had some other works - just finished it off and headed back to the bus station - but was literally shocked to see what was in store for me! It was this: BEST is running a King Long to Navi Mumbai! The bus was MH-01-LA-6090 (1110/A). The bus was based at Anik Depot (near Sion in Mumbai). The bus was heading off to Sion in the evening. I walked around taking a few pics of the bus. The driver came around, and opened the door of the bus for the passengers. The bus was left on, and the doors were closed. I entered the bus, and it was chilling inside! The interiors of the bus was awesome, and the windows were really
4 comments
Read more

May 23, 2008
Huh! The journey has finally ended! The train crawled into Yesvantpur at 0730, a full hour and 2 minutes after its scheduled arrival time here! We managed to reach Tumkur only at 0600, and the train kept a damn slow pace from there till somewhere around Nidavanda. Doubling is complete, and the section commissioned between Golhalli and Yesvantpur. The new line being laid to Shravanabelagola (on its way to Hassan) joins the Yesvantpur-Tumkur line at Chikkabanavar. I took a BMTC bus from YPR to Majestic a.k.a Kempegowda Bus station. The bus left YPR at 0840 - a full hour after I reached the bus station! I made it to KBS by 0900, and then took a Volvo on route V356 on my way to Bannerghatta Road! Overall an interesting journey! Pictures are being edited, and should be up in a day or two.... Bye for now...
Post a comment
Read more
May 22, 2008
Yeah! The return journey has just begun! Am on board the karnataka sampark kranti express to yeshwantpur. The loco in charge is KJM WDM3A 14080 working long hood forward. My reservation was originally in second ac but just got upgraded free of cost to first ac! Now let me travel king style! More would come soon!
Post a comment
Read more

May 22, 2008
Good morning.... The return journey is finally under way... Am on board the Pune bound Indrayani express from Mumbai. A trust worthy WCG2 (#20156) is in charge, and we are fast approaching the educational city of Pune.... We have already reached Shivaji nagar. More updates soon...
Post a comment
Read more

May 20, 2008
Here we are.... The train finally managed to reach Pune a while back! We are currently running late by two hours and forty minutes. We had a maximum delay of about 4 hours in the morning! More updates after i reach mumbai....
Post a comment
Read more

May 19, 2008
Oh what a start! The train that was to come at 15.05 came in only at 16.50! She came in with WDM3A 18536 of ERS in charge, and left with WDP4 20057 of KJM in charge at 1730 - with a delay of 2 hours and 5 minutes! The train was the held up at BYPL for unknown reasons, and we are now standing still at Chennasandra for reasons best known to the section controller himself! Hopefully the train picks up some speed overnight.... Forgot to add this - its raining here...... Bye for now! Note: we have started moving now....
Post a comment
Read more

Its now time to go back to Mumbai once again! This is but a very short trip with time for nothing! Anyways, I am taking the 1014 CBE-LTT Express from Bangalore to Pune, and then a bus to Vashi. Returning by 2630 NZM-YPR Karnataka Sampark Kranti Express on the 22nd boarding at Pune! Hopefully I can make updates, and be tuned right here....
Post a comment
Read more

Railfanning at Thrissur on a mid-summer afternoon... 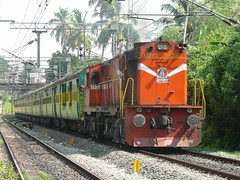 Summer afternoons are usually not a very good time for railfanning. But here, it was an opportunity that I was waiting for, and had no choice! At around 1100 on May 8, 2008 - I headed to Thrissur railway station from my Home in Kodungallur on a Private bus. The bus driver ensured that I reached Thrissur station by around 1215. The queue for tickets was pretty long. Just as I neared the ticket counter, a WDM3D of Erode pulled in with the Trivandrum bound Netravati Express. The train made a 10 minute halt at the station before starting. I headed on to the platform to get a few pics. RPF guys were too high in number as compared to Panvel, and I was a bit scared to get my camera out. My first spotting was WAP4 #22549 of Erode with the Trivandrum-Shoranur Venad Express. The train was pretty crowded, and off-loaded about 75% of its crowd here! Just the train started to pull out of the station for its journey ahead, another WAP4 of Erode (#22661) pulled in with the Hyderabad-Trivandrum Sabar
1 comment
Read more

The road trip to Kerala....

It was all set to be a peaceful train journey till the time my dad managed to connect the truck driver who was transporting our house hold goods to Kerala. He informed us that he would be reaching our place the next morning itself! We had to rush to Kerala, and the same time informed my uncle to make arrangements for head-load workers to unload all those goods! My sis-in-law called up a pretty major private operator to check ticket availability - I personally do not like traveling by them, and decided to check out government operators! We checked Karnataka SRTC first, but no tickets available. Later checked out Kerala SRTC, and got tickets on their bus to Thrissur at 10 in the night! The bus surely was a too late departure for us! We had no other option! Myself and my dad reached Kempegowda Bus Terminus - the hub of inter & intra state bus operations from Bangalore - at around 2130. We searched out for the platform from where our bus would depart, and found that the bus was alrea
Post a comment
Read more

May 10, 2008
I reached back home today! I came back on a Karnataka State Road Transport Corporation Volvo bus. The service is named "Airavat". The bus that did the honors was KA 01-F-8461. The occupancy was about 55~60%. The bus was pretty new and had new LCD info panels for the driver to inform him of any malfunctions in the engine! The run was silk smooth! The bus left Thrissur at 2125 (Scheduled time 2030!). We stopped at Pattikad for dinner, and in the process overtook a TVM-BGLR KSRTC (Kerala) AC bus. We overtook the TSR-BGLR AC bus after Coimbatore, and another unknown AC Airbus of KSRTC somewhere near Hosur. We reached Bommanahalli at 0650 (Bommanahalli is about 15 kms from Majestic). More details of the entire trip some time later....
Post a comment
Read more

May 09, 2008
The travel to kerala was eventful. The bus took 12 hours to reach Thrissur from bangalore. The ride was comfortable. The delay was mainly owing to road works and traffic blocks. The bus also had to visit bus stations en route. More on the road trip later. It was an opportunity that I had been waiting for. I had to book tickets to in back to bangalore. I headed straight to Thrissur station to check out trains, but turned a blank. Then headed to the bus station, and managed to get tickets for tonights Volvo to bangalore. I then headed straight to the railway tracks....it was an interesting session! More on all these as soon as i reach back at home......
Post a comment
Read more

May 06, 2008
Yet another trip to Kerala begins here! The only difference this time around is that instead of starting and ending in Mumbai, it is now Bangalore acting as the base! I am taking a Kerala State Road Transport Corporation (KSRTC) bus to Thrissur tonight from Kempegowda Bus Terminus (KBS). The bus would leave at 2200 from KBS. It is an AC bus. I have no information as to when would I return back, but most probably would reach back by Saturday/Sunday! I initially had a ticket for tomorrow morning's Ernakulam Intercity, but had to prepone my trip urgently! More information as and when time permits.....
Post a comment
Read more

User Fee collection details: (Compiled in the Mumbai-Bangalore direction - All rates for One-Way journey on Cars) Trip Details: Down Journey: UP Journey: There is a difference of about 6 kilometres between the UP and Down journeys - this is due is to the detour that we had to take to hire a room for the night at Satara, and a short trip from the hotel to a fuel pump for refueling! The average speed is on the lower side since we had a rather relaxed drive on Day 1, and the roads were pretty crowded from Hubli to Bangalore on Day 2!
Post a comment
Read more

Bangalore to Mumbai and back by ROAD!!!

After my last trip from Mumbai to Bangalore by train, it was now time to get back to Mumbai to shift our house hold articles. We were shifting majority of them to Kerala, while a few necessary ones were to find their way to Bangalore. A packing company was arranged for, and transport arrangements were made. We began our trip to Mumbai from Bangalore on May 01, 2008 at around 0421 on my brother's Toyota Innova! At the start of the trip... It was pretty windy and cool in the morning. We reside at Kodichikkanahalli on the Bannerghatta Road. Roads were pretty empty in the morning, and we made a very quick progress upto Yeshwantpur. Truck traffic on the road was pretty high after Yeshwantpur, and works on the Service road from Yeshwantpur to Nelamangala made matters really worse. It was a painfully slow progress upto Nelamangala Toll Plaza. Nelamangala is the first of 17 toll plazas that you have to cross on your way to Mumbai (it is 18 if you travel upto Mumbai City, we went only
3 comments
Read more
More posts