Showing posts from October, 2011
Show All

My first tryst with a Metro.. 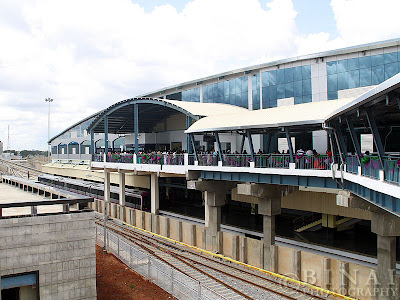 I saw the first ever Metro train in my life while passing through Delhi on my way to Chandigarh, back in June 2009. The silver, sleek train rushed through a bridge above my train - I looked at it in awe, but time constraints did not let me have a closer look. Two years down the lane, the Metro descends on my favorite city in the South - Bengaluru. Although the Metro missed a lot of deadlines, it came with all the fun.  Coincidentally, I was in Bangalore during the time the Metro was inaugurated. Some personal commitments did not let me get on the metro for the first week of its operations. I had planned a ride on the Metro on Diwali day - but that too had to be postponed. Finally, I was going on the day immediately after Diwali - October 27, 2011 to be precise. I took a bus from my place to KR Puram via Ring Road. I waited there in the hope of getting a Metro Feeder bus - I wasn't aware that this route wasn't covered by feeder buses. But there were umpteen buses going there -
Post a comment
Read more

Karnataka State Road Transport Corporation (KSRTC) is a pioneer in introducing newer age technologies among the Government run Transport Corporations. KSRTC was the first to bring out Volvo buses, way back in 2002. From then, KSRTC built up a strong fleet of those white swedish beauties, naming them after the Mythical character, Airavat. KSRTC increased their presence on many routes, and became the preferred premium operator on every route they ran on. About 8 years after they created history, they repeated history again with the introduction of Multi-Axle buses - the first for any state transport undertaking. The Multi-Axle buses of KSRTC are called "Airavat Club Class" - the buses are a notch above their regular Airavat services. The buses come with 49 seats - 44 of them with calf-support, and the rest are regular limited-recline seats. Airavat Club Class was initially Volvo B9Rs. The Multi-Axles were flagged off on 27th November 2010. These buses have replaced regular Air
8 comments
Read more 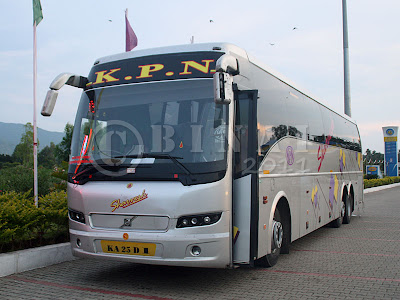 KPN - K.P.Natarajan - Travels is an infamous travel operator based in Salem, Tamil Nadu, India. The operator is credited with perhaps the highest reach to places in TN from Bangalore - but has earned a misreputation of being an unreliable operator in the past few years. KPN is a very old operator, existing since the mid 1900s. The operator started expanding sometime in the mid 1990s, and is now a formidable operator on many routes. They also have to their credit a good transparent online ticket booking system. They are also the biggest Multi-Axle Volvo operator between Bangalore and Tamil Nadu. I had been planning a trip on KPN since a very long time - It had even reached the point of booking a ticket. But that ticket was cancelled later due to some other issues - this time, I was determined to make it. Accordingly, I booked a ticket on KPN's Multi-Axle Volvo departing from Coimbatore on October 16, 2011 at 1300, to Bangalore. I reached Coimbatore by a KSRTC bus from my place, an
2 comments
Read more

Do Not overtake from the left...

October 14, 2011
This is one rule that is seen on highways often - a rule that needs to be followed meticulously. In many places, traffic police seem to enforce this rule with enthusiasm. Recently, the Kochi City Police came with an idea of "Model Road".  They declared the Edappally-Vyttila-Aroor section as a "Model Road" - where all motorists were required to follow all highway rules. The rules imposed were - maximum speed of 70kmph for light vehicles, strict lane discipline and no overtakes through the left. The cops were enthusiastically pulling up violators - overspeeding was caught using speed radars, and traffic wardens were posting at many places on the road. So far so good. However, the police said "No Overtakes from the left" - but they never tried understanding why motorists were overtaking through the left. The Government of Kerala even launched a video campaign as part of their "Road Safety Campaign" - the videos included those intended to induce al
2 comments
Read more
More posts