Showing posts from February, 2008
Show All

The land without the wires once again... 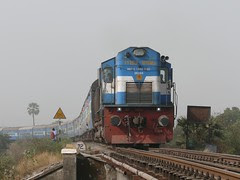 After a short but marvellous attempt in December, it was time to visit the land without the wires once again! This time, It was IRFCAn Karan Desai who gave me company to explore new places! Karan called me up on Saturday evening and asked if I would be free on Sunday to explore some place without the wires! I was waiting for such a call, and agreed almost immediately. We met at Panvel station at around 11 AM. A Pune WDG3A pair was the only occupant at the station. Just as I was moving into the station, and an announcement came that the Chandigarh bound Kerala Sampark Kranti would arrive shortly. After clicking the WDG3A pair, we took positions to shoot the incoming Sampark Kranti Express. WDM3A #14075 of Ernakulam did the honors on the train. After some photography, we decided to explore more areas. We first went to a place hardly a kilometre away from the station, but proximity to a railway gate made be hesitant. We then moved out to another place. We hit the Pune highway, and then
Post a comment
Read more

February 26, 2008
Oh God! I almost forgot this! Its been damn long since I posted here! I almost forgot about my blog! I was too busy with office that this blog took a back seat! Sorry guys! I hope to keep posting frequently from now on...
Post a comment
Read more

February 08, 2008
It was all busy days at office with no time for me to think of any thing! I completed three weeks of night shifts and now moved over to a permanent first shift (working from 7 AM to 3 PM). I was busy right from the day I moved over to First shift. On almost all days I had to stay over at office even after working hours due to job constraints! In the last two weeks, I did railfan quite often, but my job constraints kept me away from posting here. (Though I can blog from office, my job kept me really busy!). The session that I had were at Borivali and at Lokmanya Tilak Terminus. The first one was on Sunday, 27 January, and the second one on Monday February 04. The images are here: Borivali Railfanning & Lokmanya Tilak Terminus: First run of Garib Rath [ A seperate report on this would be put up this weekend ] Please have a look at those images, and let me know your comments!
Post a comment
Read more
More posts