Showing posts from October, 2007
Show All 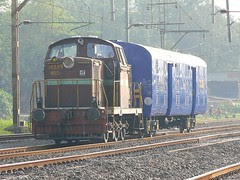 It was roughly five days back that Arzan called me up and invited me for railfanning at Sion. He confirmed the program in the afternoon. After a quick shower (Yeah! The day was too hot!), and a quick lunch, I drove out quickly to the nearby station. I parked by car and rushed off to the ever familiar "Tikat" Counter. There was a "slight" queue. I got a ticket, and reached the platform just on time for the train. I got in, and the train jerked ahead! I got down at Kurla at around 1510 - still about an hour to go for the time Arzan told me! I decided to wait for the KR3 passenger. I thought of clicking it at Sion instead of Kurla, and took a slow local. Just as my EMU was pulling out, a WCAM3 rushed off with the Sewagram express bound to Nagpur. Right behind the train, was the WCAM3 that brought the train to Mumbai. I got down at Sion and started searching to a location. I got a good one, but quickly realised that I was right next to a Police Chowky! I took the next
1 comment
Read more

October 26, 2007
On the way to my office, the bus crosses the Thane-Turbhe railway line right outside the APMC yard near Koparkhairane. I've been tracking goods trains arriving there on a daily basis now. I noticed that there is one shunter loco at the yard, something that was absent earlier. The loco seen at Kalyan is WDS6 #36239. Freight traffic seems to have gone up pretty rapidly, and there is atleast one new rake per day! Today there was one Container train led by twin WCAM3s! More coming soon...
Post a comment
Read more 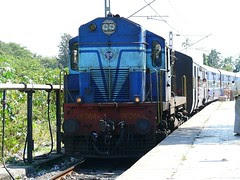 I had posted earlier in the morning that I had a bad fall yesterday, and I had to report sick to office. I started feeling better by morning, and my Dad was going to our native place for some work. I decided to drop him at the station. We left home at around 1150. I drove slowly, and we reached Panvel station by around 1220. Just as I neared the station, WDM2 #18332 of Ernakulam pulled into the station with the Kochuveli bound Kerala Sampark Kranti Express. I had to limp around to get a platform ticket. By now, my dad checked the reservation chart and purchased water for him. I reached back at the platform. We stood on the FOB till some "solid" information was available about his train. Announcement was made that the train would arrive on Platform 3 after the Dadar passenger leaves. Passenger 2 was occupied by a BTPN rake, while Platform 1 was occupied by the Sampark Kranti. The passenger pulled in WDM3A #18764R of Pune in charge. The rake had 15 coaches today, and the l
Post a comment
Read more

Landing with a thud...

October 25, 2007
Yesterday was looking like a normal day as I moved out of my home. The time was 06:05. The watchman unusually was wide awake, and he opened the gate for me. I continued walking down hearing a very familiar song - Chak de India, which is now almost an anthem for Indian cricket fans - on a popular FM Radio station. Streetlights were switched off, but it was still dark outside. The climate was cool, and sweating was out of question. I had a bad brush with a wild branch of a tree the day before, and hence decided to walk on the opposite side of the road. It was all normal was I successfully walked around 25o metres from my home. The pick up point of my Company bus is 400 metres from home. All off a sudden, My leg went into a small height difference of the unevenly surfaced road, and I lost balance. In a fraction of a second, I lay flat on the road! It was a real landing with a thud! I was unable to get up, but some how managed. My ankle was paining badly, as I struggled to walk the remai
Post a comment
Read more

The above image is only representational Now that my job is still in the training phase, we do not get the bus facility offered by the company. Company has staff buses which leave the company 15 minutes after the end of every shift in various directions. The company operates about 8 buses for the staff members. Yesterday (Wednesday, October 17, 2007), I had to travel to my office by bus (town bus). I usually drive down to office, but it was different yesterday since my family required the car. My journey to office was in two legs: Home to Vashi, and Vashi to office. The first part was undertaken on an NMMT bus, and so was the second part. I took a bus from the bus stop nearest to my home at around 0915, and reached Vashi a bit after 0935. The fare was Rs. 7, and the bus was moderately crowded. I had to stand for quite some distance. The second part is all this post is about! I took a bus working a schedule on NMMT Route Number 100 (Vashi Railway Station to Mulund East). The bus re
1 comment
Read more

A visit to Alappuzha Beach...

Alappuzha (formerly called as Alleppey) is a small sleep town in the South Indian State of Kerala. The district has most of its parts along the coast, and the remaining forming part of the Rice bowl area "Kuttanad". The entire district has lots of tourist attractions, and is a major point for Tourists visiting Kerala. The district holds the maximum number of "house boats" present in the state, and has a rather well-used water way for internal transportations. Alappuzha has a pretty long beach which is by-and-far a tourist attract. This beach has a "bridge", locally called as Kadal Paalam literally translated as "Sea Bridge". Alappuzha was a major port during the pre-independence era. The city had a huge number of coir industries. The town was called as the "Venice of the East". The port lost its importance when a major port at Cochin was opened. This bridge was used to transport material from sister ships which would anchor on to this
2 comments
Read more

October 15, 2007
Just as I had mentioned in my immediately previous post, I joined for the first job in my career today. It is a basic desk job with a reputed BPO (This job is actually a stop-gap arrangement till and get in for my Post Graduation!). A guy from the HR department called me up on October 11, and asked me to report on October 15 (today) at 0900. I got up on time, and after the regular morning chores, I rushed off to a nearby temple. Now begins the drama! I accidentally locked the car with the keys inside! The time was already 0820. My mom rushed home to pick the spare keys while I finished the work at the temple. She returned by 0845. I had a mad run after that and managed to reach the BPO by 0905. I was upset on reaching late on the first day itself! I signed a register, and was given a temporary Identity card. I rushed off to the training hall. About 15 other candidates had already arrived. I was the 16th, and after some time the 17th joined. HR executives turned up for the induction p
Post a comment
Read more 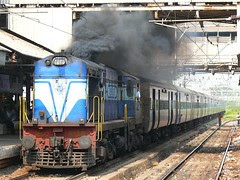 Today was a day that I would love to remember. Like how a fire would behave just before getting extinguished, I too was too energetic to railfan. I had some work at the "old" college, and left home at around 0900. Took a daily pass and got into a train towards Kurla. Just as I reached Kurla, I saw some train rushing towards CST. All I saw was the SLR, and hence I couldn't find out which train was that. The time was around 1025 then. I got a copy of the latest Suburban timetable, and rushed off to catch a train towards Thane. I took a Titwala bound "semi-fast" EMU. We crossed the CST bound Deccan Queen just outside Kurla, and WCAM3 #21931 was in charge. Just near Ghatkopar, I saw WCAM3 #21950 rushing off with an unknown express towards CST. While my train was just pulling out of Ghatkopar, I saw WCAM3 #21943 pulling in with the Pragati Express. We crossed a WCAM3 hauled express (With DQ type livery - could be the Panchvati) near Vikhroli, and the Osmanabad-CST E
Post a comment
Read more 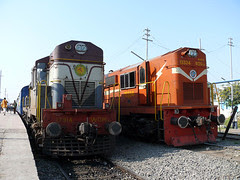 Finally that long trip is over! Here are some highlights: The down trip was on 6337 Okha-Ernakulam Express. I traveled from Panvel to Kasaragode. The loco was WDM3A #16084R of Ernakulam. It was a long tiring journey after that! I had a short Railfanning session with Jimmy Jose, Prof. Venugopal and Sudhakaran T, all RailKeralites at Ernakulam station on October 06, 2007. (A detailed report of that would be put up soon). We proceeded to Bangalore by road on October 07, 2007 (a report of that too would be put up very soon). On October 09, 2007, We took the 6340 Nagercoil-Mumbai Express from Krishnarajapuram to Pune, and from Pune we took a bus to Belapur. The loco in charge of 6340 Express was WDM2 #17914 of Erode. Details of the bus journey will be put up as a seperate report in the days to come. Images of the trip can be seen here . Please rate the images, and let me know your comments. Thanks for reading...
Post a comment
Read more

October 08, 2007
The journey is almost over, with only the last lap remaining - which would commence tomorrow. The last week had been too hectic, jumping literally from one place to another. The roads in Kerala are average, and to be honest - they are NOT as bad as they are said to be! (Detailed analysis and reports after I reach back at Mumbai). The loco that worked my train from Panvel to Kasaragode was WDM3A #16084R of Ernakulam. I was happy to see that loco since I was in search of her for pretty long time now! The road journey from Thrissur to Bangalore was superb, and we did the distance in 11-and-a-half hours, and the entire distance was driven by me. More details of the trip would start appearing after I reach back at Mumbai...
Post a comment
Read more
More posts