Showing posts from May, 2009
Show All

An unreserved train journey... after long

May 29, 2009: After a tiring function, and a sultry day at Nedumudy - in Alappuzha District, of Kerala - it was now time to return to my home in Kodungallur, Thrissur. A variety of options were available for the journey, including a direct   bus or a train. Although I am a big fan of trains, I am averse to the idea of traveling unreserved in a train that usually is a commuters' train. I was more inclined to taking a bus, but my parents were not that interested. So the final call was made - the train was to take us back. We had two options - the Alappuzha Kannur Express or the Alappuzha Chennai Express. We were too late for the former, and hence the latter was finalised. We left from Nedumudy is a Bajaj Rear Engine autorickshaw. Four of us - atleast two of us were weighing more than 100 kgs each - andsome baggage were the load. The driver maintained a decent speed through the road - which is asphalted to very good standards through the way.  The autorickshaw ride.... The road c
Post a comment
Read more

On the KSRTC Garuda yet again....

The Kerala State Road Transport Corporation's Volvo service to Trivandrum, from Bangalore, is renowned to stick to its timetable and is a well maintained service. I had a personal need to travel to Alappuzha on the 27th of this month. I booked tickets on the Bangalore-Trivandrum KSRTC Volvo the previous Saturday, and I was allotted my usual seat - #13 - on this bus too.  I was at home on Wednesday due to certain personal reasons (did not attend office). I left home at around 1500 hours, to board the bus that would depart from Majestic at 1700 hours. As I reached Bannerghatta Road, I saw a Volvo sneaking off. Disappointed, I stood at the bus stop for an 'empty' bus towards the city. An old Pass Bus came around, and the driver shouted at the top of his voice that the bus was proceeding to Majestic. I jumped in and grabbed a nice window seat. The run was slow owing to a couple of deviations and traffic snarls associated with it. I was slightly tense through the run. The drive
10 comments
Read more

On the humble AC bus yet again....

The weekend vacation at home was counting down to a close. The weather was hot and unbearably humid over the day, and it was pouring during late evenings. As the hot afternoon was getting towards a close, it was time for me to pack up for my return journey. There was loads of goodies to be taken to Bangalore and that ensured that I had a very heavy baggage this time around too. The packing was over by about 1700. I remembered to pack a bedsheet too, this time. I left home at around 1755 on a tired looking autorickshaw. Just as we reached Kodungallur Private Bus station (See it on Google earth, here ), a Thrissur bound bus pulled out. I still had a long time for my bus, and I did not bother to run behind that bus. Very soon, a colourful bus pulled over to the platform  for departure. The conductor-cum-cleaner was already shouting at the top of his voice, announcing the destination and the fact that it was a Limited Stop  service. I got into the bus and took a seat on the last row - for
1 comment
Read more 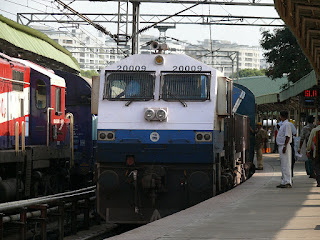 Some personal reasons, and the need for a break from the monotonous routine in Bangalore made me travel to Kerala. I was initially planning to take a bus, but had to switch over to a train since my parents too were accompanying. Thanks to summer holidays, coupled to a weekend, all trains were running full to the brim, and there was no chance that I could get a ticket anywhere. Once the train was chosen, we decided to book tatkal. (The experience booking this tatkal ticket was described earlier, read here ) I left office early on the day of my journey - 15 May 2009. My brother was to drop my parents, and bring along my baggage, at the station, while I went straight to the station from Office. I reached the station a while before the Shatabdi arrived. The rake of the New Delhi bound Karnataka Express was deposited on PF1 by a WDS6 already. WDM3D #11188 of Erode, which 'would have' brought in the 1014 from CBE, was parked on the stabling line near Platform 1. Two inspection cars
1 comment
Read more

The AC AirBus yet again...

Exactly a month back - on April 14, 2009, I was on a KSRTC AC Airbus, traveling from Thrissur to Bangalore. I was on a Vacation from office, from April 10, 2009 to April 14, 2009. I traveled from Bangalore to Kasaragode to Kannur to Thrissur to Kodungallur, back to Thrissur and thence to Bangalore. The first two parts of the journey (Bangalore-Kasaragod and Kasaragod-Kannur) were by Car, second (Kannur-Thrissur) by Train, then the rest by Road. The concluding part of the journey (Thrissur-Bangalore) was by the ever familar Kerala SRTC AC Air Bus. Coincidentally, I got the same bus as my last journey - my last journey was on March 01, 2009. The bus was RR210 (KL15-6408). I had heavy luggage with me to carry back to Bangalore. A trolley bag and a carton - both very heavy. The first part of the journey - from Kodungallur to Thrissur - was by a Private bus. I was tracking the journey on the bus using a GPS receiver, and found that the top speed we achieved was about 72kmph (on a bus that
2 comments
Read more

May 10, 2009
The Indian Railways has always played a very important role most Indians' life, at some point or the other in life. Long distance reservations always meant standing in a queue and reserving tickets. The grime, dust and heat of the journey aside, most people enjoy the journey thoroughly. Reservations for tickets usually open 90 days (this was 60 earlier) prior to the date of journey.  Earlier, people used to go to reservation counters the previous night, and sleep outside counters. This was to ensure that they would be among the first few in the queue, when the counter opens at 8AM. This was prior to commissioning of networked reservations, and those days each station had a fixed quota. The concept of waiting list did not exist then. With the advent of All India, computerised, booking, the pressure to get a ticket at 8AM just grew. Summer Vacations are usually sold out on the opening day of reservation itself, with some trains selling out all seats and entering waiting list within
1 comment
Read more

Metric Musings: Across the Vindhyas

Prelude: A marvellous video presentation by Poochi Venkat at the IRFCA Convention on the Dhul Ghat spiral ignited a to visit the place in the minds of many. However, the distance and lack of encouragement, left the desire within many people. The Mumbai gang decided to finally make a visit to this place and they invited more people to join. The initial plan involved very little MG journey and was forcibly replanned. Independent from the plans of the Mumbai gang, some of us here in Bangalore decided to make a trip to the same place. For the sake of convenience, the same dates were chosen as that of the Mumbai Gang. Finally on the 12th of March, four members from Bangalore, and two from Chennai, embark on a journey from Bangalore to Nagpur. We took the Rajdhani express to Nagpur, and then the Pune Garib Rath from there to Akola. Akola is a small town in the heart of the state of Maharashtra. The gang was to travel from Akola (in Maharashtra) to Indore (in Madhya Pradesh) covering the sc
1 comment
Read more

Marcopolo: Off the radar?

Marcopolo buses hit the road of Bangalore with great fanfare in Novermber 2008. The city which first introduced Volvo City buses, made an attempt to introduce more AC buses. The local transport provider - Bangalore Metropolitan Transport Corporation - decided to try out Marcopolo buses in an attempt to introduce more AC buses, but at a lower expenditure. Tata Marcopolo seemed made for the role. Two buses were provided for trials by Tata Marcopolo Motors Limited. These red-coloured monsters were powered by 230hp rear mount diesel engines, and were claimed to be better than a Volvo, while being more cost efficient and comfortable that a Volvo. These buses were introduced on two routes - KBS-Nelamangala and KBS-Hoskote. The effective frequency of these services was about once in three hours, which was later brought down to approximately one in 30 minutes using Volvo buses. The initial hype was shortlived since the buses could not be run on roads due to certain registration formalities
1 comment
Read more
More posts