Showing posts from December, 2018
Show All

A Houseboat ride along the canals of Alappuzha 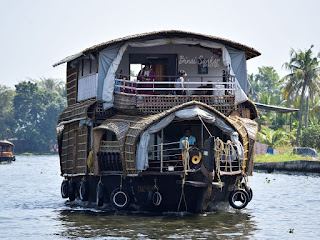 Houseboats are an inevitable component of the tourism sector in southern Kerala, especially in the districts of Alappuzha and Kottayam. Unofficial counts say there are over 100 houseboats in Alappuzha alone. Houseboats came to the scene over a decade ago, as goods transportation along the inland canals declined. Houseboats came to fore as a modification of Kettuvallams  - country boats built of wood, and mainly used for goods transportation in the olden days. I remember seeing goods being transported using such vessels  during my childhood, while visiting my maternal hometown in rural Alappuzha. In the olden days, some such vessels were also used for long distance travel through the inland canals - such boats had basic protection from rain and sun. Some of these vessels were also used as ferries to take people across rivers, in places where bridges didn't exist. As road transport became popular, and more bridges were built in these rural areas, goods transport moved from the eff
1 comment
Read more
More posts