Showing posts from November, 2007
Show All 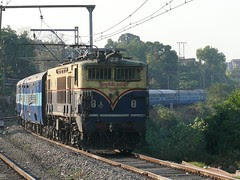 [Nov 20, 2007] I had some work to do at Ulhasnagar, and had taken a day off the previous day (or should I call it night) from office. I left home at around 1030, and reached Kurla a while after 11:25. I left one Karjat train, and instead decided to take a train to Kasara (which is an AC/DC EMU, and would let me enjoy high speed runs!). While waiting for my connection, the CSTM bound Sahyadri Express went past with WCG2 #20129 in charge. Just a few minutes behind was the Sewagram with WCAM3 #21931 in charge. The run from Kurla to Thane was eventless, except for spotting a twin WCAM3 hauled BCNA at Nahur yard, and a WCAG1 (#21981) hauled Tanker rake at Thane home. I got down at Thane, and decided to wait till the Netravati comes. The Netravati came in at around 1210 with WDM3A #14046 of Erode in charge. An RPF officer was standing near the loco keeping an eye on me and I had to play some hide and seek to get a pic of the loco that looked fresh out of a POH. Some time after the Netravati
Post a comment
Read more 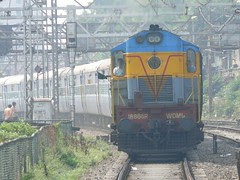 I had a very short railfanning today at Mumbai. I was sitting Idle at home since my office shift is at night! It was a result of a pretty long planning. I left my home at around 0930. I took a train from Vashi, a one that started from there. I was initially planning to take a train to CST, to check out the trip shed there. But later, I decided to head to Thane to see the Netravati Express. I took a Slow EMU from Kurla towards Thane. A WCAM3 went a bit ahead of my EMU on the through line. The WCAM3 was seen reversing into LTT Trip Shed later on. We crossed quite some trains on the way. The crossings were: The Rajendranagar-LTT Express with a WCAM3 at Kanjur Marg, The Sahyadri Express with a WCG2 at Bhandup and the Sewagram Express with a WCAM3 at Mulund. A WCAM3 hauled train over took my EMU just as we were entering Thane. As I entered the Foot over bridge, a single Kalyan WDM2 hauled tanker rake rushed off towards Kurla. Right behind this tanker rake was a BCNA rake hauled by twin Ka
Post a comment
Read more 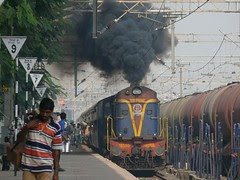 After reaching back at home from a rather tiring night shift, an opportunity to railfan for some time at Panvel was kept on my table! Should I miss it or take it? It was my chance to take the call. I decided to go ahead! After a quick round of coffee, I was at the wheel. I took the ever familiar route via the Highway to Panvel. As I was nearing the station, I saw the Mandovi Express pulling in. I parked the car at the station, and rushed to get a platform ticket. Just as I entered the station with a Platform ticket, the WDP4 gave a long horn, and the loco started moving out! The reason why I was at Panvel was to drop a relative of mine, who was to take the Mangala Express. His ticket was not confirmed, and was still wait listed. Just as we walked in after checking the charts, a twin Kalyan WDM2 hauled Container train pulled in from the JNPT side. I was in no mood to take out my camera. Instead, we decided to proceed to Platform 3 straight away. We reached the platform, and found out a
Post a comment
Read more

November 08, 2007
After a rather tiring night shift, I and my colleagues walked out of the office complex to find that buses were just coming in. There are 5 buses serving employees of the night shift, and a total of 9 buses catering to the other shifts. 4 of the 5 buses came in, while my bus was missing. We walked round to check if the bus was parked a bit ahead Finally, the bus made her appearance at around 0705. The bus (MH-04-G-3797) had a flat rear left tyre! The driver and the cleaner got down to change the tyres. All the other buses where cleared at 0720. Before departure of each bus, a watchman counts the number of staff leaving by each bus. The buses wait for 15-20 minutes after end of each shift. After 20 minutes of end of the shift, the watchman blows his whistle as a permission for buses to leave the unit. The tyre changing job appeared to take pretty long. The bus was ready after the entire exercise by around 7.50, and the bus left the unit by 0800. All the employees traveling by the bus
Post a comment
Read more

November 06, 2007
In just 15 days from joining the company, my shift changed, and my name now features in the 3rd Shift (2300-0700). It was really interesting. Duty changes are put up every Saturday. No such thing happened this saturday, and we did not expect any changes. But, a new list came up on Monday morning, with a good amount of changes! I'll report to duty at night from today onwards! So its sleepless nights ahead!
Post a comment
Read more

Another sunday at Neral... 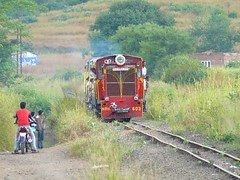 After a long week at office, I thought that the best way to spend the Sunday is to railfan. AS thoughts about this railfanning kept "re-winding" in my mind, I received a call from Arzan (on Friday). I was waiting for a training session to begin when I got this call. He was proposing a trip o Neral! I did not think another time before saying "YES!". I checked up with the internet and found that the Matheran Hill railway was back on track! So that was an icing on the cake! The Sunday dawned, and a small "box" news in a Malayalam News paper informed that EMU services in the Vashi-Kurla section was cancelled today! I had to change my program now. I quickly checked up and decided to take a train to Thane instead. I left home a bit after 1100. I parked my car at Vashi, and rushed off to purchase a ticket (a one day pass). I got it and rushed off to the platform to take a train to Thane. The run out of Vashi was interesting. I reached Thane at around 1200. Pla
Post a comment
Read more
More posts