My first tryst with a Metro..

on October 31, 2011
I saw the first ever Metro train in my life while passing through Delhi on my way to Chandigarh, back in June 2009. The silver, sleek train rushed through a bridge above my train - I looked at it in awe, but time constraints did not let me have a closer look. Two years down the lane, the Metro descends on my favorite city in the South - Bengaluru. Although the Metro missed a lot of deadlines, it came with all the fun.
Coincidentally, I was in Bangalore during the time the Metro was inaugurated. Some personal commitments did not let me get on the metro for the first week of its operations. I had planned a ride on the Metro on Diwali day - but that too had to be postponed. Finally, I was going on the day immediately after Diwali - October 27, 2011 to be precise. I took a bus from my place to KR Puram via Ring Road. I waited there in the hope of getting a Metro Feeder bus - I wasn't aware that this route wasn't covered by feeder buses. But there were umpteen buses going there - seeing all of them crowded, I got into an Autorickshaw - making by wallet light by Rs. 50.
The Metro station at Baiyyappanahalli resembled a shopping mall, and it had the kind of crowds that Malls see on weekends! There was a police bus standing outside, and half a dozen cops were sitting near the entrance and chatting off. On entering the station, I went through a Metal detector - they did not check my bag though. Then comes an escalator - I did not see any steps for going up - having them would be a good idea for people scared of escalators. The Escalator was dead slow, and I felt like walking up - resisted the idea though. After the escalator was a long "skywalk" that gives a view of the carshed, and the yard. There were no security guys or cops anywhere in this stretch - people were talking photos of themselves posing on the skywalk. The ticket counters are located on the first floor - its a huge balcony kind of thing. The counters had a very huge queue - four counters were open, and each one of them had humungous queues. One of the counters was issuing only tokens to MG Road. After 15 minutes in the queue, I reached the ticket counters - purchased a Varshik Smartcard and charged it for the minimum amount (the card costs Rs. 50, and the minimum recharge is Rs. 50). After getting the card, I walked 'into' the station building. One has to take an escalator to get to the platforms, which are at ground level. 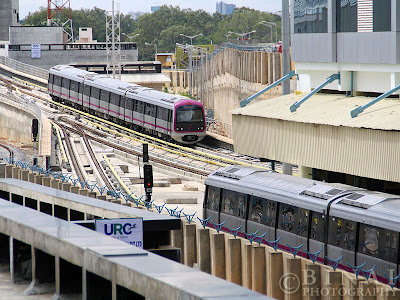 The station has two platforms (sorry - no images. The queue was humungous for me to take any decent images). Arrivals were on Platform 1, and departure from Platform 2 - the incoming train goes towards the yard, reverses and enters the other platform for its return departure. A while after reaching the platform, the train from MG Road came in. The Security guys on the platform had a very tough time to keep people behind the yellow line - the whistles were getting me crazy. Passengers were absolutely non-cooperative - no body was ready to listen to the security guys. When the train came into to our platform, what ensued was reminiscent of Mumbai's Locals - people were pushing each other, with loud howls. The train came in and stopped - the doors weren't opened. Later the train crawled a bit forward for it to align with the door markings, and later the doors opened. All this time, people were pushing ahead all the time.
I got into the coach - the middle one of the three car rake. People were jostling to get a seat - passengers were mainly families who were out to have a taste of the metro. There were lots of guys working in companies around BYPL - the likes of HP. The train got moving by 1300hrs - there was no jerk when the train started. It started gently - slowly crawling ahead, and then picking speed. The train made sounds similar to the DC EMUs of Mumbai - the sound was nostalgic, very nostalgic. The AC was hardly able to cool the coaches - the crowd was too much for it handle. 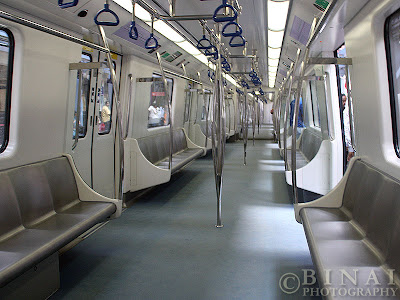 There were announcements before the train arrived a station - they announcements were in Kannada, English and Hindi (in the same order). The English announcements were horrible though - there were plenty of grammatical errors - an Example: "Train will arriving MG Road station" - this announcement plays when the train would just be entering the platform. The announcements also included details like which side the platform would arrive, and also reminded people of the gap between the coach and the platform (the gap was too less for people to fall, though). The train reached MG road around 1312 - thats a 12 minute ride for 7 kilometres. A road journey on the same route would take atleast 45 minutes!! 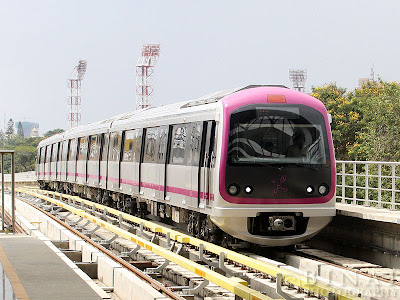 Now the next drama - the train empties and goes out to reverse. The security guys still want people on empty platforms to stand away from the Yellow Line - a couple of guys talked rough to the security guys for going overboard - I took a couple of images and headed out. But wait - the exits were all chocked! I took the exit that seemed less crowded to me. Getting to the exit gates itself was a task in itself. More than the number of passengers, the gates were often getting stuck, and people were trying to get past the gates without dropping their tokens - the security guys had a tough job here. 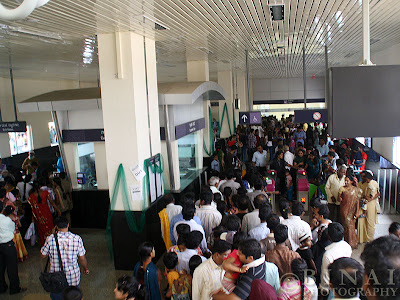 I decided not to be a cultured citizen - and cut across lines and reached the gate quickly. Since I had a Varshik Card, I just swiped it and walked out. The scene outside was interesting - the entry gates were closed - I presume it was due to some problem at the ticketing counters. Interestingly, at Baiyyappanahalli, a counter was closed since the tokens got over! Perhaps the same happened at MG Road as well. There was a HUGE queue to get into the station - the queue was stretching till the point I could see far in the horizon. 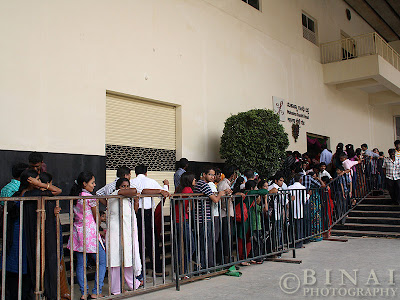 I got into a Metro Feeder bus that was waiting outside - thankfully BMTC does not keep a board as to where the bus goes, other than a useless board which says the route number was "MG-MF-4", with the origin/destination reading as "MG Road Metro Station". They did not bother listing out the route the bus would take - forget writing in English, they did not write it even in Kannada! The rude behaved controller there did not bother replying to passengers either. The conductor was shouting out "Majestic, Majestic" - I got into it, there were no seats though. I changed buses at Shivaji Nagar and proceeded to Majestic later.
The Metro service was too good - the coaches were well finished. The crowd would surely come down - to less than 50% of what it is at present. Being a short corridor, that does not serve any of BMTC's Milk Routes (ITPL/E-City/ORR/Bannerghatta Road), the Metro shouldn't be looking at high riderships until its next reaches open. But surely the Metro has a bright future in a city which sees traffic blocks as its favorite time pass :P
railfanning