on December 26, 2019
This was a prefixed booking - I did not really think beyond this operator as I looked for tickets to travel from Chennai to Thrissur. In fact, I did not find the other options very inviting, and opted to keep them for the next time! The rates weren't very high at that time, and I booked the ticket without a second thought. I took a single lower berth, as usual. The boarding point seemed quite away from Koyambedu bus terminus - a link to the location on google map was provided on the ticket.

November 30, 2019:
It began pouring down as evening approached. I had a tough time returning to my hotel room from the university - it was puddles of water all around, and I had to dodge all of them to get into my room. I thought the rain would subside - but it didn't. It continued raining on and off till late in the evening - it was still drizzling as I checked out of the hotel. I had to have my dinner - but reaching the nearby restaurant wasn't easy! I managed to get into the restaurant, and complete my dinner. Walking to the pick-up point of my bus was impossible - one, it was far enough; two, the entire route is full of muck! I began searching for autos - it was still drizzling, and the entire area was chocked! I managed to find an auto who was just dropping a passenger - he was initially hesitant to go to the place, but later agreed. Considering my situation, I did not bargain, or even ask him for an estimate!

He said the entire area is chocked - I asked him to go through the longer route, he agreed. The traffic was slow even there, but was moving. It took him about 15 minutes to get to my bus boarding point, near the CMRL office in Koyambedu. I was expecting a three digit figure as the fare, but the driver bowled me over by asking a fare that was even less than what was charged by Ola! The boarding point was opposite their office - but was a place without even a shelter. I was worried about rains - it would've been real mess if it rained. I was tracking my bus continuously using the tracking link provided - and the bus had come quite close by then. It rolled in to the boarding point by 2045hrs - about 15 minutes before departure time.

I headed to my seat after leaving my bag in the baggage hold - the interiors were classic! The finish looked good at the first look - the lighting was good, and a faux wood finish was used on the roof. The berth was completely surround by FRP - everything from the roof to the side walls were made of FRP. There was no entertainment system available - a bottle of water was provided, along with a pillow and a blanket. Boarding was going on quickly - but one large group, which had booked almost all the upper double berths in the bus, was yet to arrive! The crew were following up, and at one point, I could hear the crew getting angry at the group 'leader'. We started off from Koyambedu at 2111hrs - 11 minutes behind schedule. The delay was solely due to the group.

Traffic seemed okayish as we passed Maduravoyal without much delay. There was fairly good traffic at Vanagaram toll gate - we somehow cleared the toll, and pulled over for passenger pick up (2131hrs) - it took a little time to finish board. We started moving by 2134hrs. In the meantime, I received messages on WhatsApp that the traffic beyond Perungulathur was terrible! We got to Perungulathur at 2210hrs - we slowly entered traffic and it took quite a while before we could start moving, even after completing boarding. We started off at 2224hrs. I remember seeing the bus pass Vandalur - we were crawling. I dozed off after a while - slept fairly well as well. I woke up as the crew announced a toilet break. I wanted to use the restroom badly - rushed out of the bus to find the vehicle stationary near a toll gate. I returned to the bus soon after the purpose was accomplished - I was drowsy at the moment, and couldn't really make sense of things going around. The crew were upset at the group booking passengers - they had disappeared and hadn't returned!

The bus got moving after the break at around 0145hrs - we had lost no less than 15 minutes. And we were only at Paranur - that is about a 50 kilometres from Chennai, and we took over four-and-a-half hours to travel this distance! That means we had encountered terrible traffic on the exit from Chennai - without doubt! I slept off in no time. I had a nice long sleep - woke up hearing my phone ring. I hadn't left an alarm - so this had to be a phone call. That was TW at the other end - I had told here I'd be in Thrissur by 6, and the time was around 7 then - she wanted to know where I was. Half asleep and groggy, I struggled to find where we were - saw some wall writing in Tamil, and told he we were still in Tamil Nadu. I disconnected the call and dozed off for a while more. I woke up about 15 minutes later, and checked with the GPS to find where we were - the bus was rushing through Perundurai bypass at the moment - so thats a lot of delay! The driver was maintaining 100 (so said my GPS), but couldn't feel the speed inside.

I slept for a while more, waking up as the bus stopped at Madukkarai check post (0811hrs) - people rushed off the bus in search of a restroom - but there weren't any. We started off at 0813hrs. The bus made another halt at Walayar incoming check-post (0824hrs) and started off in no time. We stopped at Chandranagar (Palakkad bypass) for passenger drop (0842hrs) - a quick stop, just enough to open the baggage hold and hand over bags - and started off by 0844hrs. I badly wished the crew pull over for a break - and a while later, the attendant came around announcing a break. He informed it would be a quick break, and requested pax to return soon. 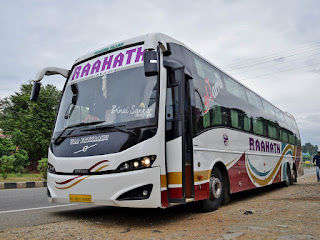 We pulled over at a hotel near Kuzhalmandam, at 0855hrs. Another Celeste, of Orange Travels, was at the hotel as well. I wasn't very hungry - picked up a pack of biscuit and returned to the bus. I used the time to take some photographs of the bus during this time. We started off from the hotel at 0915hrs - after a 20 minute break. The crew were good - the driving style was good, and the crew tried their best not to lose more time. I was hoping there was no block at kuthiran - Google Maps said there was no delay as well. In fact, after many years, we passed through Kuthiran without having to stop anywhere - the traffic moved slowly, but steadily. The driver picked pace after Kuthiran and rushed towards Thrissur. I was finally dropped at Mannuthy at 1003hrs - Thrissur have 'evolved' to Mannuthy for most private operators (precisely a reason why I prefer STUs) - its a huge inconvenience having to change over to another bus/vehicle to reach the city, and then again take another vehicle to get to the final destination. Buses can't be run only for end-to-end passengers, right!

Remarks: The bus, KL-63-G-2450, had about 59000 kilometres on the odo. It was well kept - and the ride quality was great. The interiors, as mentioned earlier, looked premium and the over finish was good. The fineness of finish was lacking - there were uneven panels, worn out sealants and sharp edges. However, the overall work was great. The crew were excellent - both the drivers drove really well. The delay was for reasons beyond their control - looking at the section times, the bus took about 4h30m for the first 50 kilometres, and about 8h20m for the next 550 kilometres, including a 20 minute break! Great driving style, minimal use of horn and soft lane changes. I liked the service, and would surely look forward to repeat a ride with them.

Ratings:
Maintenance: 5/5
Cleanliness: 5/5
Driving: 5/5
Crew behaviour: 5/5
Punctuality: Not Rated [Delay due to reasons beyond control of the crew]

Overall: 5/5 [Not considering the delay]

Will I take this service again? Will surely give them another chance!
Busfanning