on March 31, 2020
The ubiquitous south Indian crispy, thin crepes made of fermented rice and lentil batter is a favorite in almost every South Indian restaurant. An all-time favorite item on the menu that is often available morning to night (some hotels don't serve this food during lunch hours). It comes in a variety of forms - Plain, Masala, Ghee, Butter, and what not. There are other variants that don't use lentils, some that use other grains like Rava or millets.

Although all the South Indian states specialize in preparing this food item, the way it is prepared changes between the states. I wouldn't comment on the variants of Dosa available outside of South India. Now, everyone likes the style of Dosa that is prepared in their home state - the crispy thin layered version of Tamil Nadu (Dosai), or the thin, not so crispy variant of Kerala (Dosa) or the thicker, oily and roasted variant of Karnataka (Dosé - read as "Do-Sey"). Each style has their own fan following, and its own taste. 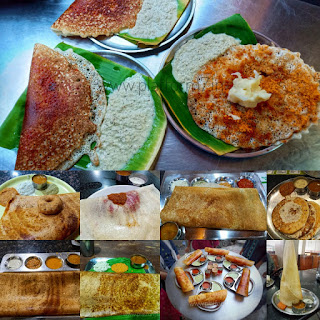 While, I don't write a lot about food on this blog, my regular readers would've guessed that I am fond of food. I absolutely love trying newer styles of food, and experimental cuisine is my favorite. In this post, I'd try to list out my favorite Dosas I've had from some restaurants in and around Kerala, Tamil Nadu and Karnataka. I haven't had the opportunity to take time to experiment with food in Andhra Pradesh - all my visits were too brief to do that. This list is not exhaustive by any stretch of imagination - I'd love to see your inputs on this as well - may be I'd get a new restaurant to try!

Lemme start off with my favorite in the lot - Hotel Annapoorna Coimbatore. Hotel Annapoorna is an emotion for all Coimbatoreans. I was born in this quaint city in Tamil Nadu. Annapoorna is a household brand in Coimbatore, and is famous for two things - Coffee and Sambhar! As a kid, visits to Annapoorna were always memorable - our family outings always meant Annapoorna, and the food here is still the same finger licking delicious as it used to be some 30 years ago! I always try to include Annapoorna in all my visits to Coimbatore. There are two varieties of Dosai I love to eat here - their Ghee Roast and the Masala Dosa. The Ghee Roast is a cone shaped crispy treat that smells of fresh ghee even as the waiter is two table away! The yummy Sambhar and the chutneys they give along with this gem of a product is a must-try! Don't miss their variety Dosas as well - especially the Cauliflower dosa!

The Masala Dosa from Indian Coffee House! This is another emotion! While the main ingredient of Masalas in restaurants across the country is Potato and Onion, Indian Coffee House adds its house favorite - Beetroots! These Dosas have a hit of redness as they reach your table - the masala has a distinct sweetness from the Beetroot, and the fingerlicking taste! Indian Coffee Houses in Kerala almost always serve this with yummy Coconut Chutney (this is a plain version, with no other additives, except the Mustard tadka) and Sambhar! I must caution - all the Indian Coffee Houses aren't the same. There are two cooperatives that run Indian Coffee houses in Kerala - one is Thrissur based (that operates in the erstwhile state of Travancore-Kochi) and the other is Kannur based, which handles the entire Malabar region. The Kannur one has a slightly different masala though. This must be coupled with their Cutlet (again rich in Beetroot) and Coffee!

The Masala Dosa from Hot Coffee! Hot Coffee is a small self-service restaurant located in Rajaji Nagar, right opposite ESI Hospital. Its a small restaurant, with some seating area around it. This place is always bustling with people - and quite a lot of them (including yours truly!) are regulars there. The specialty of this Karnataka styled dosey is that is usually very crisp, and the masala is well mashed. The dosa master generously puts on a masala powder after spreading the batter - after the powder goes in some oil. As the dosa gets roasted, goes in the masala. The masala is made of well mashed potatoes, green peas and onion. This goes really well with the tangy coconut chutney they service! Must try if you are around Bengaluru.

Davanagere Benne Dosa - I've tried a few shops in Bengaluru, and also a shop when I had traveled to Davanagere. Benne Dosa, or Butter Dosa uses a slightly different style of batter - its watery and is generally poured on to the tawa, and generally not spread out after that. The fermenting technique is different, and this batter usually has some baking soda in it. These dosas are generally thick, and are cooked with generous amounts of butter. It is usually served with a Potato Palya and spicy coconut chutney. The potato palya is generally made of mashed potato, some onion and salt - it doesn't contain any spices otherwise. Benne Dosa is generally very filling - its high on fat as well. Go try one at a Benne dosa outlet near you - there are plenty of them if you are in Bengaluru.

Podi Dosa from Sangeetha Chennai - A lot of people look at Saravana Bhavan when they head to Chennai. My experiences with HSB wasn't great - the last few times the dosa was soggy and the Chutneys was nothing great to talk about. Sangeetha is a great choice if you are in Chennai - they are cheaper than HSB and serve really amazing food.  While I like the different Dosas they serve, I really loved the Podi Dosa that I had from there during my last visit. The Podi Dosa is basically a plain dosa with generous amounts of Podi applied on it. Podi is a spicy coarse powder mix that is usually used as an accompaniment for various breakfast items, especially in the southern part of India. It is made of Dried red chillies, lentils and salt - the composition varies by the state.

Dosa from Pisharody's Restaurant -  Pisharody is a chain of restaurants in Palakkad and Thrissur districts of Kerala. They have a Dosa Mela every evening at their restaurants, offering a variety of fillings. They have a branch right next to the KSRTC bus station in Palakkad - it was a favorite place for me and TW during the days she was at her place before our daughter was born. Pisharody's dosa is more Kerala styled - it is generally large, not very crisp, but thin and well cooked. The dosa is served along with Sambhar (typically Kerala styled) and a couple of chutneys. Similar choice of Dosas are served at Hotel Aradhana near the KSRTC bus station in Thrissur. I am a fan of this restaurant as well - in fact, I had tried the Thattil Kutti Dosa from there last time, and it was truly value for money!

Dosa from Saravana Bhavan Classic near Krishnagiri is another favorite. They service it with amazing Chutneys, but their Sambhar is usually a let down (they've been consistent on that). Another great place for Dosa is Hotel Mangalam, near Krishnagiri again. This place has some delicious variety dosas as well - my favorite from here is the Mushroom dosa. The Hosur-Krishnagiri stretch of highway has these two gems - perfect places for the highway traveller!


There are plenty of other lovely options that I can vouch for. Like the Pesarattu Dosa of Andhra (this one is made of Green gram and rice), rava dosa at various restaurants in Bengaluru, or Neer dosa at various restaurants (My pick is Durga Grand at Rajajinagar, Bengaluru). I am ending this post - getting really hungry. Lemme raid the kitchen refrigerator if there is some batter to make some dosa here!
Food

Sunup said…
I am not sure how it is in Thrissur and Palakkad side, but in areas like Ernakulam, Kottayam, Pathanamthitta, Kollam etc, Dosa is pronounced as Dosha. Is it the same in your area too?
3 April 2020 at 09:31:00 GMT+5:30

Unknown said…
Hi Binai, This is so well written. Simply loved it.
The Indian Coffee House has a special place in my heart. Whenever I travel to SAIL plants for work in Chattisgarh and Orrissa, The canteens run by the Indian Coffee House save the day for me.
9 June 2020 at 09:41:00 GMT+5:30