on September 06, 2019
This decision to book on VigneshTAT was quite straightforward. I did have come confusions before the booking went through though - the fares of different operators was one reason for the confusion. I wanted to try a particular service operated by VigneshTAT for a few reasons - one, they operated a MG Bus & Coach built 'LeeraZ' sleeper coach; second, the bus was built on a Tata LPO 1623 chassis (a new product in the market); third, it was a new operator for me. Fares listed on the website was on the higher side - I got a single lower berth blocked for me through a good friend, who also managed to get me a discount on the ticket price.

[Conflict of Interest: Although a discount was received on the ticket price, the operator, or their representatives, have not edited the content of this review, or mandated addition/deletion of any facts contained in this review]

August 31, 2019:
I had returned to my hotel room quite late in the evening. I had left from the place where I had work only around 1630hrs - ended up spending time to get a bus to return to my hotel. I first headed to a nearby restaurant for an early dinner, after which I returned to the room. My boarding point was at Adyar - about an hour away from my hotel by road. I had to leave the hotel by 1945hrs to be on the safer side - I had very little time to rest, then rushed with the packing and getting ready. I hired a cab by around 1930hrs, which dropped me at Adyar by around 2035hrs. The travel agent office at the boarding point was getting crowded - they had left a few chairs outside, which were mostly occupied.

The bus turned up around 2050hrs - the bus parked a little away from the office (a few metres away - not too far away). One of the drivers headed to the travel agents' office to get the boarding chart, while the attendant went away to get items for a puja. The crew offered puja to the bus before they commenced boarding. I left my bag in the baggage hold - the driver ensured it was placed inside the hold. The other driver quickly checked my seat number and let me in. I was a in a single lower berth - the fourth one from the front, perhaps, right over the rear axle. We got moving from Adyar at 2109hrs - about 9 minutes behind schedule.

First impression about the coach: The interiors was fab! The fit and finish of every part inside the coach was uniform. The lighting was fabulous - warm tone lighting was used, with strips of the light placed on the roof and on the structure of the lower berth. Blue tone lights were used to illuminate the flooring as well. Charging points and reading lamps were posted in every berth. The berth was wide enough - could've been a little more wider, though. The length of the berth was appropriate for me. The lack of a place to keep my backpack was a worry though. The berth had an LED monitor, on which they played a movie for a while. The engine was quite audible inside - the rear axle made all kinds of noises as the bus got moving. The rear suspension made a lot of noise everytime the bus went through a bad patch or a speed breaker. The engine lacked refinement as well - it surged forward after every gear (this needs some attention from the driver as well). 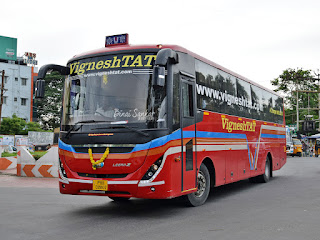 There was terrible traffic inside the city, and our progress was quite painful. The AC was at high force - the berth was cooling very quickly. I quite liked the positioning of the AC vents in these MG built coaches. The fact that there was volume control for both the vents was a big positive. The next pick-up was at SRP Tools (Taramani), at 2130hrs. We moved to Velachery next (2144hrs), followed by Thoraipakkam (2154hrs), Karappakkam (2204hrs), Sholinganallur (2212hrs) and finally Medavakkam (2226hrs). Traffic got thicker as we neared Vandalur. We passed Vandalur at 2301hrs.
The attendant had finished distributing what we could called their welcome kit by now. The kit contained a bottle of water, and a small paper bag containing a piece of cake, a small serving of Namkeen and a tissue paper. I was quite hungry (I had skipped dinner) - and finished whatever was served on board!

The traffic was even worse after Vandalur - we came down to a standstill. I was quite tired and slept off quite soon - we were still wading through traffic then. I slept quite well, and woke up only as the crew announced a break (0245hrs). The announcement was made through the speakers placed near each berth. We had stopped at a small tea shop - they had toilets, which was a good thing. There were a few other buses for company, as well. The break was quick, and we got moving by 0257hrs. I had a nice long sleep afterwards. The ride quality was not great - the bus bounced quite a bit, and the damping of vibrations was poor.  My sleep was quite long, and I woke up only as the bus entered Coimbatore. We stopped at Coimbatore Airport to drop a passenger (0705hrs) and continued to the city. Passengers were dropped at Hopes College (0708hrs), PSG College (0710hrs) and Lakshmi Mills (0714hrs). We finally got to Gandhipuram at 0719hrs - about 39 minutes behind schedule.

Remarks: The bus, PY-01-CU-9932, had about 36000 kilometres on the odo. The bus was maintained in good shape externally. The crew were great - both the drivers and the attendant were very friendly. They accommodated most passenger requests. The driving style was great as well - very sleep friendly too. The bus is perhaps not the bus product in the market - the bus lacked refinement and very high NVH levels. The service from V-TAT was great, but the bus wasn't so. Hope they replace the bus with a better one.

Will I take this service again? Will surely give them another chance!
Busfanning