Mysore to Bengaluru: On the Shatabdi - race to catch the Basava!

on August 04, 2019
This was an interesting booking. I had to head to Gulbarga (Kalaburagi) after the duty in Mysore. The sole direct train was Basava Express, and that departed very early from Mysuru. Although the examination duty in Mysore was only until noon, I did not want to risk booking this train. I had to take a train from Bengaluru - but being a Friday, almost all the trains were waitlisted. The only train with tickets was Basava Express! This was a Catch-22 situation! I was staring at having to take the VRL again to Kalaburagi (since the other options were expensive) - not that this was bad option, but I had some other thoughts, and had already picked VRL for my return journey.

While browsing for options, I remembered the Shatabdi Express. I quickly check its timetable and found the Shatabdi would depart 45  minutes after the Basava, and still reach 15 minutes before the Basava in Bengaluru. Basava also had a 30 minute long break in Bengaluru - effectively giving me a 45 minute connecting time. The Shatabdi had plenty of seats as well - this was a sweet deal! Interestingly, the train was about five rupees cheaper than the bus (KSRTC Airavat Club Class), and a full hour faster!

July 5, 2019:
The exam completed earlier than expected. My counterpart accompanied me and another examiner for lunch at a restaurant near the railway station. I headed to the railway station after lunch - the time was around 1350hrs then. The Shatabdi Express to Chennai departs at 1415hrs. The train was parked on Platform 1 already - the coaches were locked for cleaning. I headed to the business end to see what power would take the consist to Chennai - Royapuram WAP7i #37018 was getting ready for the run. The HOG cable was being connected and tested at the time. 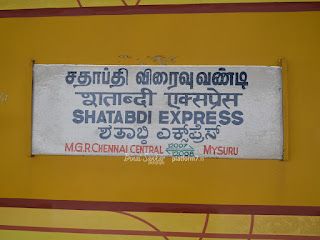 I returned to my coach - C5. The coach was still locked for cleaning. The coaches weren't opened until 1405hrs - just ten minutes to go for departure. People mobbed in, and there was mad scramble to get to their seats. The coach wasn't very crowded - mostly 1-2 passengers per row. The train got moving at 1420hrs - five minutes behind schedule. The WAP7 picked pace like a rocket - the ultra light 10 coach consist was peanuts for the locomotive. We got to three digits in no time - the ride was stable and perfect. There was a bit of vibrations, but horizontal oscillations were greatly under control. Water bottles were distributed by the pantry crew soon after we had departed.


The TTE came around checking tickets - a tab was used to mark attendance. The train ran at fairly good pace through out, except for speed restrictions at some places. About an hour in the run, the pantry crew came around to distrubute a 'tea kit' - this contained a pack of biscuits, a packet containing a tea bag, dairy whitener and sugar. I was asked if I wanted tea or coffee - I asked for coffee, and I was duly given a tea kit! Another guy came a little later with a glass of hot water - to make tea. I skipped the whitener and had a black tea instead.

We overtook the Basava Express to Bagalkot (my train to Kalaburagi) at Hejjala - at 1539hrs. Twin WAP7s were at the head of Basava Express then. The train slowed down after Nayandahalli - it came down to a crawl as we neared Bengaluru City station. The train finally crawled into KSR Bengaluru station at 1612hrs - two minutes behind schedule.

A quick journey - perfect for that quick Mysore-Bengaluru trip!
railfanning