on September 02, 2018
I hadn't considered other options when thinking of a bus journey from Kannur to Bengaluru - it had to be Golden! I had two reasons - one, they had brand new Volvo coaches, and two, they were the best on the route in terms of service and timings. Almost all the north kerala operators prefer bookings at their counters than online - they do not offer seats on online booking websites (not even their own website) during peak days. I was traveling right after the Onam weekend, and it was tough getting tickets. I briefly romanced the idea of taking a KSRTC bus for this single reason. A friend came to my rescue - he promised to get my seats blocked, and he did it for me. Since, it was during the peak season, the office staff suggested that I pay and confirm the seats - I just did that. A couple of days before I paid for my tickets, they replaced their buses with brand new Volvo B8Rs as well. So this was to be my first journey on a Volvo B8R.

As a matter of caution, I reconfirmed my reservation at the Golden Travels office in Kannur a day before my journey as well. Infact, their office called me up on the day of journey to confirm my travel once again!

A little past 2100hrs: It began raining - pouring, rather. We were just about to check-out of our hotel room at that time. We held on for a few minutes to see if the rain abates - it didn't and showed no sign either. We had to walk to the travels office in pouring rain - umbrellas were of no use. We got to Golden Travels' office by about 2120hrs - our bus was to depart at 2130hrs according to them. The office was crowded, so was the walkway outside. It was tough finding place to keep our bags as well. While TW stood guard to our bags, I went to the office to get our boarding passes. The guy just wrote our bus number as "6577" - I quickly checked and confirmed it was a Volvo B8R indeed.

Our wait for the bus turned a little long - the rain had caused some traffic snarls en route, and it was coming in a little later than scheduled. The bus works Thrikaripur-Bangalore. The green coloured bus came in at around 2135hrs - about 5 minutes behind their scheduled time. A huge number of passengers alighted as soon as the bus stopped - this bus serves as a pick-up vehicle for passengers from that area. They commenced loading parcels as well - majority of them were bags of a courier company. We boarded the bus after leaving our bags in the baggage hold. The bus was still new - the interiors were fresh and immaculate.

The overhead racks were all packed - I had quite a task to move around bags and find space to leave our backpacks. Passengers boarded very quickly and settled sooner. The office staff came around to check tickets and issued boarding passes to those who hadn't collected them. The attendant came around quickly to take a quick headcount as well. We finally got moving by 2153hrs - about 8 minutes behind announced departure time. The ride was a little bouncy - the usual B7R kinda ride. The engine sounded noisy at lower gears - was more of a clatter than a noise.

We had a pick-up near Chowwa (2204hrs) and continued towards Mananthavady, via Kuthuparamba. I slept quite well in the initial bit of the journey. Although the seat had rexine upholstery, I found it quite comfortable compared to the older rexine seats. The blanket provided was of appropriate size as well. I woke up as the bus hit a bad patch - the bus shook violently as it negated the bad patch. I dozed off again - quite well as well. I woke up as the lights were turned on by the crew - the bus had stopped for a break, at Hotel Janatha, near Hunsur (0359hrs). The break was short - more of a 'leak' break. There were toilets for men and women at this place. We had company of another Volvo B8R, of Ashoka Travels. We started off at 0416hrs.

I slept quite well again - waking up as we passed Bangalore university (Jnanabharathi). I was in an quandry - should I carry on towards Market or get off at Satellite bus station itself - the latter would help me save some time, while the former was 'economic'. I chose the latter, and got set to get off at Satellite. We were dropped outside Mysore Road Satellite bus station at 0645hrs - well behind the expected arrival time. The bus had taken a longer route, and had battled terrible roads as well! 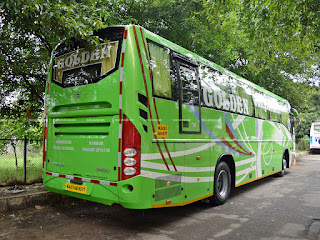 Remarks: The bus, KA-51-AB-6577, was very young, having clocked only 17000 kms! The bus was in mint condition - very well kept, considering the condition of the roads it plies on. The crew were great - very soft spoken and polite as well. The driving was very stable - no hard brakes, no rash driving. The end-to-end running time was about 8h52m, to cover a distance of a little over 361 kms, covering a long ghat, and a fairly long section of inexistent roads and a break of 17 minutes. The journey was good, and my first experience in a Volvo B8R was 'not that bad'. The engine has a grunt - similar to that of a B9R. Overall, a good journey.

Amenities:
Blanket: Yes
Water: No
Snacks: No
Charging Point: Available. Did not use.
Entertainment: Available, not used.

Will I take this service again? Absolutely!
Busfanning

rahulvijayev said…
You are very lucky to reach Bangalore by 0645hrs after leaving from Kannur at around 2200hrs. Last week we went to Sulthan Bathery from Kannur with some relief materials and the road from Periya to Mananthavady is almost non-existent and in very dangerous condition. We even saw the brand new Bharat Benz AC seater of Golden broke down near Boys Town. Adding to this, the roads from Mananthavady-Kutta-Gonikoppal are pathetic too.

Karnataka RTC has cancelled their Kannur AC Sleeper and Kanhangad Volvo until further notice due to the condition of roads.
3 September 2018 at 22:28:00 GMT+5:30

C.A.Raghu Ram said…
When the roads were good, pvt operators did Bangalore kannur in 6.45 to 7 hrs