May 20, 2017
Given our time restrictions, we had to take the bus to return from New York. I had posted about the decision making process in my earlier post. Soon after we decided to take the bus, I headed out to the websites of the two major bus operators - Greyhound and Megabus. Megabus had two buses - one running over the day and another running overnight - both had terrible timings, and wouldn't fit into our requirements in any way. So it was down to Greyhound - they had buses through the day - no less than 8 departures! The overnight buses were ruled out due to their arrival timings at Rochester. We picked up a bus that left after noon, which I later found was operated by Greyhound's partner, New York Trailways. I also found that this was a special service, operating only on weekends. I checked out the website of New York Trailways as well, and finally booked the ticket through the NY Trailways website (since the Greyhound website was very slow to respond, and seemed to charge a higher processing fee). The website gave out strict instructions that I need to carry a print out, and they cannot print it for me. The ticket itself was structured like an airline boarding pass.

May 07, 2017:
I was quite exhausted as we walked out from the 9/11 Memorial at Ground Zero, and I badly wanted to rest. We had two choices - one was to take our hop on-hop off bus back to Port Authority bus station, from where our bus to Rochester would depart, or take a local MTA Bus to reach there. Google Maps kept asking me to take a metro instead - but I wanted to test the bus. My colleague agreed. It was a long walk to get to the nearest bus stop from where out bus, M20, to Port Authority bus station would depart. For some reason, an earlier bus driver informed that M20 might not come to that bus stop, and he dropped us at another bus stop. After about 5 minutes of waiting, an Orion VII bus owned by New York MTA rolled into the bus stop working M20 to Lincoln Centre. The bus, #3939, was quite empty - all thanks to the Sunday. The bus driver was quite fast - but he stopped at every bus stop, and the bus got almost full as we reached out bus stop - 8th Ave 40th Street.

I was to meet a former colleague of mine at the Port Authority bus station. He came in a little past 1300hrs. We did not realise how time went by as we stood talking. My bus to Rochester would depart at 1445hrs, and we had to finish our lunch before boarding. It was already close to 1345hrs when we realised that. My friend suggested we should try something from Carlo's bakery - as we headed in for a quick snack. After the snack, my friend quickly took us to the gate (#22) from where our bus would depart. I had confirmed the platform number from the Trailways office the previous day. The Port Authority bus station was a very interesting building - the bus station has four levels about ground and two below, with the lowest floor being used by Greyhound, Trailways and similar operators. Gate 22 was located in the south building.


A fairly long queue greeted us as we reached the gate. I was quite shocked seeing the length of the queue so early for boarding! We joined the queue - no options anyways. Boarding started at 1429hrs. As I inched closer to the gate, I could see white lights - I was hoping I get a newer Prevost coach. I had found out earlier that Trailways had largely Prevost coaches with a few MCI coaches as well. The ticket was checked by the driver (operator) himself, which seems to be the norm with Greyhound and its associates. It was indeed one of the newest Prevost H3-45s that was taking us to Rochester that day. We got into the bus only to find the front half occupied already. We slowly moved towards the back, and finally found seats near the wheelchair lift. This was not the most comfortable of the seats - no leg rest and a poorly placed charging point as well. A Greyhound Prevost coach departed before us, and we backed out of our gate at 1447hrs - two minutes behind schedule.

The operator made a welcome announcement as we inched out of the bus station - he informed that we were headed to Rochester, and would go via Binghamton, Ithaca, and Geneva. He also informed that we would be having a rest break at Gouldsboro sometime past 1630hrs. We exited the bus station, and quickly entered the Lincoln tunnel and got on our way towards New Jersey. From the engine sound, I could clearly guess we were powered by a Volvo engine (which was confirmed by the driver later). It was raining fairly well through the journey. I was a little tired, and took a quick nap - but the seat wasn't helping matters. While the leg room was decent, it offered very little recline. After struggling a bit, I managed to sleep on and off. We pulled into an Exxon fuel station at Gouldsboro, PA at 1634hrs - the driver announced a rest break and asked all passengers to be back by 1655hrs, and he walked out. There was a Greyhound bus for company as well.


There was one Burger King outlet, and an On-the-Go outlet as well. I checked both the outlets, and decided to pick-up something from Burger King instead. I picked a Veggie meal and a Dr Pepper drink to go with. We had to hurry with our meal - which we preferred to finish at the restaurant itself instead of carrying to the bus. The driver was at a table next to us - he signalled us to take our time to finish. He checked with us as he finished his meal - we were done as well. We returned to the bus, and we got moving by 1656hrs. As we departed, the driver announced that the next stop would be at Binghamton, about 90 minutes away. We were on route 380. After Scranton, we entered route 81. We turned off the freeway at Binghamton and headed towards the Greyhound bus station in downtown. We reached Greater Binghamton Transit Centre by 1812hrs. A lot of passengers got off here. A little after we reached, the driver informed that there was a faster bus to Rochester, and people who wish to change may change to that bus - We decided to stick to this bus itself.

We started from Binghamton at 1824hrs - about 9 minutes behind schedule. As we departed, the driver announced that our next stop would be at Ithaca. A quick look at the map showed that we wouldn't be taking the normal route via Syracuse - we would instead take country roads for the next few hours and go via Ithaca and Geneva. We continued on Interstate route 81 for some more distance, before turning to route 79 towards Ithaca. This was a normal two-lane highway - I was really enjoying the way the driver handled the highway. The highway took a fairly hilly path and the driver put up a great demonstration of his skill. We reached Ithaca bus station at 1927 - two minutes behind schedule. The driver announced that we would depart only at 1935hrs, and passengers were free to stretch. The bus station had a small building and a large ground. Showers had just taken a break, and there were large pools of water on the ground. It was terribly cold outside, as well. 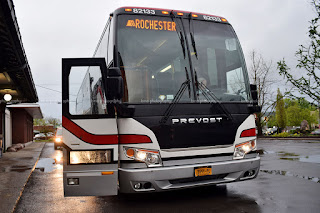 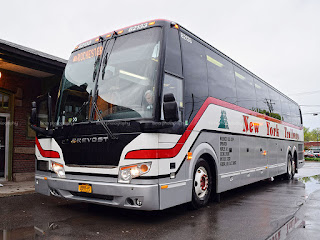 We started from Ithaca at 1935hrs. It was slowly getting dark outside. I was tuned to a movie on my phone. We had changed our seats after Binghamton - the bus was more or less empty from there. It got even more empty after Ithaca. We pulled into Geneva at 2028hrs - well before time. The driver announced this as well. We departed from Geneva at 2035hrs - as we pulled out, the driver announced that we should be reaching Rochester in about 50 minutes or less. We entered Interstate route 90 a little later. We picked speed once on the interstate, and rushed towards Rochester. We spotted familiar places as we neared Rochester. We finally entered Rochester Trailways Bus station at 2122hrs - three minutes before schedule. 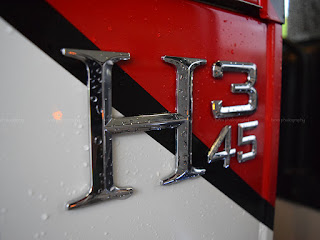 Notes: The bus, #82133, was a 2013 Prevost H3-45 Intercity coach. The bus had a Volvo D13 engine mated to Volvo iShift 12 speed automated manual transmission. The bus had 52 seats. The interiors were quite minimalist - just basic stuff with leather seats with wooden flooring. No fancy stuff or added lights inside. Quite a departure from Indian buses, they played no movies or music - which I really appreciate. The seats did not have a bottle/cup holder - which was sorely missed. The driving was amazing - the driver used cruise control most of the time and kept going at the state highway speed limits. I loved the journey. The free WiFi worked flawlessly except in some stretches, where my mobile data also couldn't connect.