The day was tiresome - I had attended a wedding of a friend that afternoon, and later had a get-together of fellow railfans near Majestic. I reached home pretty late - only by around 1900hrs. Since my bus was to leave at 2120, I had to leave home latest by 2015hrs. I did manage that feat - my brother dropped me at Shantinagar Bus Terminus. My bus was already there, and they had also started boarding.  I left my baggage in the luggage boot - this time, they gave a baggage tag (The last time I got a Baggage Tag in KaSRTC was three years back!).

This was the same bus that I had traveled about a month back (read here): KA-01-F-9278 of Depot-2 Bangalore. The bus had added some 13K kms since my last journey - this time the odo read some 25000-odd kms. I got into the bus at around 2115 - the conductor was still standing outside, should "Thrissur, Ernakulam..." - I was happy for the fact that they did not want to enter Coimbatore city. The driver got in at 2120, and switched on the engine (and the AC). They played one slap-stick confusion comedy Bollywood movie (its a recent flick). The driver just moved the bus forward, closer to the exit, and we continued to wait for some more time. Finally, the bus got moving at 2126 hrs - a 6 minute delay at origin.

We had pickups at Dairy Circle (2135), Madivala (2145) and Electronic City (2210). It was during this journey that I noticed this fact: KSRTC has appointed inspectors at all these pick-up points. The Conductor has to go to them and get his waybill signed. This did cause some delays, but timekeeping allows passengers to remain relaxed devoid of the fears of the bus going without them. The driver sped up after Electronic city - we were decently fast. The only road block was the toll gate at Attibele - it was crowded. I tried to sleep a bit - but the loud comedies of the movie did not net me sleep. 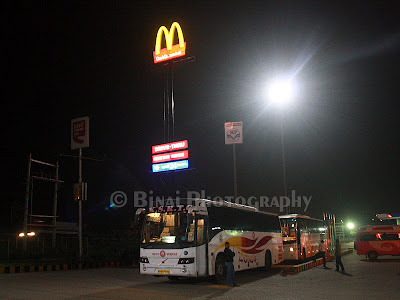 We pulled into the food plaza near Shoolagiri at 2252 - made a quick run to McDonalds and grabbed a McVeggie, and returned to the bus - only after capturing a few shots. The engine was, unusually, left on during the break. I was back at my seat now. My aisle seat was empty, and I had the liberty to use both the seats. We started off from there at 2316. The movie was still playing. After the movie finished, the conductor came around and closed the rear LCD panel. Curtains were drawn - yes! They had fixed an extra curtain to reduce lights at light. 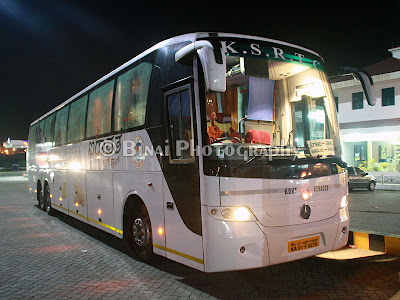 Now, the bus meant business - I could hear the engine, but the sound was subdued compared to my previous experience. I was ahead by only a row this time - so the seating position would not make much of a difference. Engine sound was still audible - transmission made a lot of noise. The airconditioners were set to very low temperatures now - the ugly window vents was freezing me down. The cold temperature wasn't helping matters much and I found it really hard to sleep. Ride quality, as usual, wasn't great - the bus sways at bad sections.

The adjustable leg rests are the worst I've seen ever - this is not the fault of the bus manufacturer, but the seat manufacturer. The leg rest wouldn't lock at positions that are comfortable for passengers - it would either be too high or too low. I also felt that the leg space for the particular row was poor - my leg was hitting the bottle holder every time and it pained badly. I slept intermittently - I do remember traveling through the bad patches between Avinashi and Neelambur. We pulled in for yet another break at Ettimadai - at 0410. It was hot and humid outside - very different from the cool environs of Bangalore. This time too, the engine was left running. 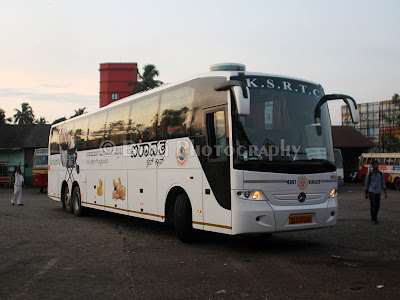 As we prepared to start, at 0423, the Airavat to Thrissur came in. Our driver meant business as we started off from Ettimadai. Thankfully there was no traffic snarl at Walayar - I slept through the section, and woke up only as we stopped to drop a passenger at Mannuthy. The run from Mannuthy to Thrissur was brisk as usual - I was dropped at Thrissur exactly at 0630 - a 20 minute delay over the promised arrival time. The bus took 9 hours and 4 minutes to finish the journey - the time taken is on the higher side, but the driving was really relaxed and decent.

Comparision: I felt the ride quality in the Volvo was somewhat better than the Mercedes. The leg space in the Volvo was better as well - in fact, I had a co-passenger in the Volvo as well, and I could still sit comfortable. About noise insulation - cannot make a fair comparision. The Volvo had over 2.49lakh kms on the odo, while the Merc had all of 10% mileage of the Volvo - at just 25000 kms. So age would have had an effect - but still, I'd rate Volvo a bit higher than the Mercedes. The window air vents of the Mercedes is the biggest thumbs down for me - I'd not take this bus for this sole reason.

The overall atmosphere in the cabin of the Mercedes is a notch higher than the Volvo - the sleek gear lever, fake wood finish on the instrument panel, the dark MID, etc are some features which attract me. The aisle is very narrow in the Mercedes - walking through with luggage can be a royal pain. The awfully shallow overhead rack is too small to hold anything bigger than a backpack - so passengers had left baggage on the gangway - a safety threat in case of an accident. The brakes are another feature that I like in the Mercedes - One wouldn't slide off their seats during brake application - the retarders are very effective - but the side effect, is the awful noise from the retarders inside the cabin.

Overall: I'd rate both buses equal - but, if there is an option, I'd take the Volvo. Mercedes needs to do a bit of homework to improve noise insulation and also to improve width of the gangway. And, please close those window-aimed air vents too..
Busfanning

Krishnaprasad said…
I travelled by Benz very recently and Volvo many times since they started. I liked Benz more than Volvo, for Volvo, the seats were harder, the leg rests were not proper when I travelled. In both I got Seat No. 1 and 4, and in Benz, I didn’t feel much chill because of the air vents above. Maybe it might be an odd experience, but somehow I feel Benz is good.
Moreover I tried for a seat in Benz for coming 23rd, but only last row remained that time. But I got seat No.1 in Volvo Multi Axle to EKM.
2 December 2011 at 21:22:00 GMT+5:30