November 21, 2011
A back-to-back trial of the Volvo and the Merc Multi-Axles was on my mind for a long time. Although there has been close incidences, I've never been able to do a "back-to-back" trial till date. A personal reason gave me a chance to make a very quick journey to Bangalore (A real quick journey). The tickets were booked only a day prior to the journey - both ways by Airavat Club Class. I took the Volvo B9R from Ernakulam to Bangalore, and the Mercedes Multi-Axle from Bangalore to Thrissur.

My bus was to leave from Ernakulam KSRTC Bus Station at 2035  - I left my home (about 42 kms away) at around 1835. I missed a bus just as I reached a bus stop - there began my delays. I got into a small bus (can't be sure if I can call it a bus - it had all of 18 seats!) which dropped me at the nearest Town - Kodungallur - by about 1855. I got a bus towards Ernakulam (RAM972 of Parur) by about 1910 - the 15 minutes I spent at the bus stop was agonising. The official running time from Kodungallur to Ernakulam is an hour and 25 minutes - so the bus would be reaching there only by 2035!

The driver was in no mood to speed and he crawled for most of the time - to add to my agony, it was one horribly vibrating Tata! We reached Parur at 1930 - the official running time from Kodungallur to Parur was 25 minutes - we did it in 20 minutes despite the super slow driver! This lightened by mind, and I was now hopeful of making it to the bus station on time (atleast just in time). The bus continued its crawl. It was 2005, when we neared the infamous Edappally Railway Level Cross - Damn! It was closed! I lost all hopes of making it to the bus on time. It took about 10 agonising minutes for the train to go, and the gates to open. The bus crawled at a leisurely pace towards Ernakulam. A small block at Palarivattam made me more tense - there was a worse block at Kaloor.

2030 hrs - a call from an unknown number. The person at the other side of the phone asks me if I had reserved a ticket to Bangalore - I understood it was the conductor. I replied Yes - he asked me if I was coming - I said yes, and I'd be there in another 5 minutes (knowing well that it was impossible to be there in 5 minutes). He mumbles that the bus is already late and asks me to hurry. In the meantime, my bus crawls into the bus stop at Kacheripady (this bus goes to Ernakulam Jetty, via Menaka - information for the people with an idea of Ernakulam). I literally jump off the bus and run towards the rickshaw stand - get into a rickshaw and request him to speed up. He concedes to my request, and he drops me at Ernakulam bus station at 2036. I run to the Airavat Club Class parked at the "Interstate bay". 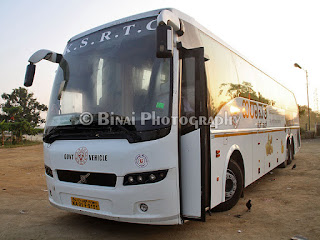 The conductor mumbles something as he sees me - I was very sorry. He double checked that it was indeed me who was "missing" - he checked my ticket, and confirmed it with an identity proof. I presented an "m-Ticket" - KSRTC sends a copy of the ticket as an SMS to your registered phone number. You just need to show this SMS - no need for a printout! He just saw this SMS, and asked me for my identity proof. I left my bag in the undercarriage and took only my backpack inside the bus.

My seat was #29 - a Left window seat in the 8th row. My co-passenger was already seated. I just made it to the seat, and the bus got moving. The time was 2039 (a delay of 4 minutes). The bus runs via Rajaji Road - Chittoor Road - SA Road to reach Vyttila, where they have a pick up point. The turn from Rajaji Road to Chittoor Road was real tight - and a stupid biker made it tough for the driver as well. We reached Vyttila at 2053 - this is where most passengers joined the bus. We had some 35 passengers on board - not bad for a Friday from Ernakulam! We started from Vyttila at 2057.

A Kannada movie - Hudugaru - was being played. I hadn't seen the beginning of the movie, but one scene was a clear give-away of which movie it was - I had seen the same story in Tamil and Malayalam as well. This movie is a remake of the Tamil hit, Nadodigal, which also made in Malayalam as Ithu Nammude Katha. The three versions were similar, scene by scene - except for some adaptations to suit local tastes.

Coming back to the bus - the driver was driving horribly - he never bothers to change gears, and the bus was being lugged every time. We got held up at Edappally signal - we could get off the junction only in our third attempt - the line was so long! Once on the highway, the driver did a good job - we did not have anymore pick ups, and the bus just kept running. We overtook the Bharathi Multi-Axle Merc at Aluva. In the meantime, I had my dinner - packed from home. The bus stopped for dinner at one "Hotel Jubilee" at a place called "Pongam" just at the border of Ernakulam and Thrissur districts. This hotel is beside a fuel station and has a lot of parking space for buses - a lot of operators have now moved over to this hotel from those umpteen shady motels on the highway.

The dinner break was from 2143 to 2210. The exit from the hotel was a mess - due to construction work of service roads. The bus got back to the highway after a bit of circus. The driver was decently fast - there was one Shama Big Bus trying to overtake us badly - that driver was very rash - he attempted a few very close overtakes - thankfully things did not take an ugly turn. The cat-and-mouse game continued till Thrissur bypass - our bus took the flyover. I am not sure where the Shama went. I vaguely remember seeing Mannuthy bypass - I slept soon after. I remember waking up when the bus ran through the rough patches upto Kuthiran - the ride was matured, and did not throw us around.

I woke up around 0130 - the bus was stationary then. The engine was running, and there was one Multi-Axle Merc (of KSRTC) ahead of us, and the Trivandrum-Bangalore Multi-Axle Volvo of KSRTC standing parallel to us. The bus was crawling once in a while - just when I realised that we were stuck in the infamous traffic snarl at Walayar - on the Kerala-TN Border! I slept off again and woke up around 0230 - we were running through Coimbatore town then. All I remember seeing is "The Residency" at Avinashi Road, Coimbatore. I slept off after this. I woke up exactly at 0600 - when I woke up, I saw there was daylight already. 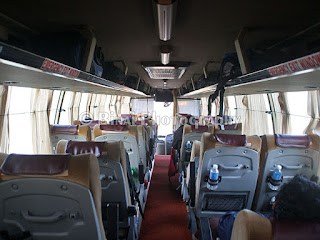 We stopped for yet another break, at 0635 - at Hotel Surya, at a place called "Kurubarapalli" - somewhere between Krishnagiri and Hosur. Started off from here at 0647. When we pulled in for the break, it was the Conductor at the wheels - not sure when the change happened, since it was the driver at the wheels when we started off from the dinner break. When we started from that "glorifed tea stall", it was the driver again at the wheels. The driver was driving better than the conductor - this conductor guy had a habit of shifting to neutral the moment the bus reaches a down-grade!

There wasn't much traffic on the road - but there were enough trucks to slow down our progress at the ghats. We made a halt at Electronic City to drop a couple of passengers - at 0756 AM. The next stop was at Bommanahalli, where I got off - 0813 AM. The driver did not mumble when I requested him to stop - he patiently pulled the bus to the left, so that the conductor could open the luggage hold. Airavat crew are certainly a class apart (there are rotten eggs here, for sure) - but their service is warm, considering the fact it is a government company.

The bus was in good shape - it did have bruises from the battles it battled on the Bangalore-Pune route (the bus has a regular permit on the Pune route, and perhaps also has a spare permit for the Ernakulam route). Even with 2.47lakh kms on the odo, there were no rattles from the bus - no "out-of-note" sounds from the suspensions or the tranmission. The leg-room was really great - I had a long sleep in the bus for the first time! The seats were a bit worn out - may be due to its colour combination. A "super-civilised" not-so-gentle-man had stuck chewing gum on the window glass - wonder when our people will have basic sense of cleanliness. I certainly loved the ride in the Volvo - much more than the ride I had on the return.

Krishnaprasad said…
This Airavat Club Class Volvo seem to be back to back non stop vehicle, and they offer a very nice journey. In my first travel on Jan 11, they took only 9hrs from Shantinagar to Ernakulam! But later on I faced all lazy drivers, in Benz too. But owing to the comfort it gives, we are likely to use it again....
21 November 2011 at 21:20:00 GMT+5:30