on September 22, 2011
After three years of planning, booking and cancelling, I was finally at it – heading to Dudhsagar falls, near the Karnataka-Goa Border. I was accompanying Jayasankar on the trip. We were taking the Bangalore-Dharwad Siddaganga Express from Bangalore to Hubli, and then the Hubli-Vasco Link Express to Dudhsagar. Jay had arrived that morning at Bangalore, by the Chennai-Mysore Shatabdi Express. I was running late, and had to make a dash to the station. In the meantime, Jay got lunch for both of us. I just got into the station when Jay called up and said our train was on Platform 9 already, and I need to rush. The time was around 12:15 – and the scheduled departure of our train was 13:00.
I walked through Platform 1, and then walked through the trolley path. Just as I reached Platform 7, the DEMU towards Bangarpet (Marikuppam?) started off. The train literally crawled out – it took too long to clear out. Once it cleared out, I headed towards Platform 8. I was heading to Platform 9 – all of a sudden, I heard someone calling out my name – I turned out, and it was Jayasankar! He had settled down on Platform 8 – I just realised that there was some confusion.
The announcements on the PA system were hard to decipher – poor quality of announcement added to our woes. There was a talk of our train departing from Platform 9, but a rake with the markings “Bangalore – Shimoga – Mysore” (all written in Kannada) was stabled. I thought it was the Bangalore-Shimoga Intercity. The LCD panel kept near the platform kept displaying arrival-departure information, but there was no talk of this train to Shimoga – this confused me even more. Since the time of departure was approaching, and there was no sign of that rake departing, we decided to head to Platform 9.
We walked to Platform 9, and asked the pointsman standing there – guess what? The rake was indeed that of Siddaganga Express! The rake comes in from Shimoga, and goes out to Dharwad as Siddaganga! The lazy C&W staff at SBC changed the boards only on the platform side (the new boards read “Dharwad – Bangalore – Mysore”), and let the boards on the other side remain as “Bangalore – Shimoga – Mysore”!!! I was shocked, enraged and terribly disappointed! What if we hadn’t checked with the pointsman? We’d have merrily waited there for our train, while seeing it going out!!
We headed to the sole AC Chair Car coach in the formation of some 20-odd coaches – the coach was old, and poorly kept. The toilets were stinking, and the stink was penetrating to the passenger cabin as well. We had the “two-seater” on the first row – Seats #3 and #4. We just settled down – soon after, Jay headed out to check the loco. The Loco for our run was WDP4B #40046 of Hubli DLS. The train started off dot at 13:00. Just as we started moving out, the Chennai-Bangalore Brindavan Express sneaked into Platform 1 with a WAP7 in charge. There were no noteworthy incidences during the run – it was more or less dry. The Loco made a unique sound – the horn too sounded very different. 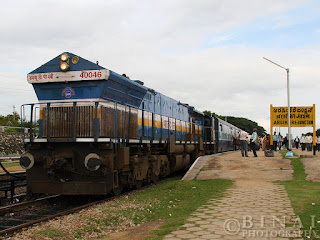 We reached Hubli perfectly on time at 2110. The train more or less emptied out here – it was cold at the station. We headed to Platform 2 to have some food. We had our dinner from a stall on the platform – replenished our water stock and got some biscuits and other stuff for the busy day ahead. The platform was crowded to the core – The Sampark Kranti to YPR and the Rani Chennamma to SBC would be arriving in an hour or so. The Sampark Kranti was the first to come in – it was a WDP4 (Or 4B?) of Krishnarajapuram in charge. In the mean time, we decided to head to Platform 4 (or is that 5?, the island platform near the coaching workshop). This platform too was crowded – on the other platform was the rake of Tirupati-Hubli Passenger with a live GTL WDM2 coupled to it.
The PA system came alive and blurted out: 11048 Hubli-Miraj Express would depart from Platform 4 (or 5?). Soon after the announcement was made, WDG3A #13052 of Pune came in with the rake of Hubli-Miraj express. This train has just one Sleeper coach, and about 11-12 General Coaches. The board resembled that of, what Jay calls a “Global Village Passenger” – the board had names of most places in the region! The WDG3A went with the rake almost until the starter at SBC end. We sat near the SLR of the Miraj Express – there were lots of passengers accompanying us. We had seen most of those faces in Siddaganga express as well!!
Confusion prevailed – there was no sight of our Link Coaches – one each of SLR, 3A and Sleeper. Sometime later, the WDG3A ran through the other line with the link coaches in tow. The loco went out, and came back to our platform. In the mean time, the Rani Chennamma to Bangalore came in. Our Coach was 2004-made. The AC was still to kick in – we both had lower berths. I directly hit the berth – so did our co-passengers. The TTE came in for checking soon after the train started from Hubli. The attendant also distributed the bed rolls – surprisingly they were well packed! The bedspreads were fresh. I don’t remember much – I fell asleep soon after the train started rolling.
I vaguely remember seeing the train stationary at Londa – but fell asleep again. I woke up only after we stopped at Castle Rock. I headed to the front to check our loco – it was WDG3A #14551 of Gooty in charge. Jay had witnessed the entire shunting operations at Londa – lucky him! I slept all the time :sad: I took a couple of images at Castle Rock, and then returned to our coach... The halt at Castle Rock was very long – the halt was almost an hour long. We got off at Dudhsagar –the rest is already posted!
We went through two Pandemonium squares on the day – Bangalore and Hubli. Lack of proper announcements was the villain at both the places. The improper boards too added to our misery at Bangalore.
Side Note: The dosas served by the vendors at Tumkur was awesome! So were the vadas at Arsikere!
railfanning