on September 10, 2011
Kallada G4 - a smaller company, part of Kallada Group run by four brothers - recently introduced a new Volvo B9R service between Bangalore and Changanassery via Ernakulam and Alappuzha. Kallada G4 is a smaller operator compared to the brother concern Suresh Kallada. G4 operates all of 3 services - one each to Changanassery (B9R), Guruvayur (Semi-Sleeper Non-AC) and Kottayam (Sleeper Non-AC).

Since the bus was new, booking on this service was a no-brainer - they did not have online reservation at that time, and I had to make a visit to their agent - Friends Travels at Madivala for the booking. The booking process was quick. The fare was Rs. 900 (compared to Rs. 950 on Suresh Kallada). The bus was almost empty at the time of booking. Interestingly, the bus that would carry me back was parked right outside the office at that time - had a quick look at the bus.

Fast Forward to September 01, 2011. I was at Madivala by around 2045, for a 2130 departure. My last journey on a Kallada G4 bus was in May 2007 (read it here). Back then the service was awful - they were operating the bus as Pathanamthitta-Bangalore via Alappuzha, Ernakulam - it was a Mark II Volvo B7R (The bus on the day of my journey was KA03AC2000, now with Sangita Travels). They recently sold their old B7Rs and replaced them with two brand new B9Rs. I somehow dared to try them this time - but the experience was too good.

Being at Madivala during the late evening peak hour, there were lots of buses heading to different places. After a couple of rounds of photography, I decided to get on board my bus. The bus was parked right in the middle of a slushy ground - they had laid cartons to create a kind of bridge for people to board the bus without dirtying their feet or the bus! I got into the bus, and left my baggage - the AC was yet to be switched on. I decided to stay outside till the driver gets in. The driver got in at around 2125 - about 5 minutes to go for departure. The engine was switched on, and the AC was running at full force. I got in and occupied my seat - we had around 14 passengers on board. 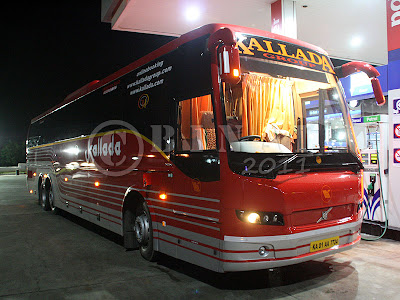 A guy from the travel agency confirmed if all were on board and signalled the driver to start - but they were still loading parcels. The driver was getting upset at the delay - we finally started off at 2134. He was very cautious - and did not exceed 80kmph anywhere till we got into TN. We had a pick up near Chandapura. The driver meant business soon after we crossed Attibele - he picked pace swiftly. We stopped at Shoolagiri for refueling - the bus took in a good 460lts of diesel. The driver said that they pick up fuel only in one direction, which helps in maintaining schedule. We left after refueling at 2249. The movie was awful, and I slept most of the time.

The bus stopped for tea near Salem - a very short one. About two minutes into the break, a traffic cop came and asked the driver to start off. Just as we started, I noticed that the Shama Big Bus (Bangalore-Ernakulam) which left about 30 minutes after us was also there. Shama too started off right behind us - both buses gave company to each other all the way. I slept soon after we crossed Salem - was woken up only when the bus stopped at KG Chavadi Check post, on the TN-Kerala border. The cleaner went to the check post and got the papers checked. We moved a bit forward and stopped on the road side.

The bus backed into a small cut road, and kept waiting for someone. In the meantime, the Shama Big Bus came from the Kerala side! It was the same bus that gave us company from Bangalore to Salem! It turned out that there was a heavy traffic block at Walayar - the Shama bus turned back, and came to Chavadi. Both the buses - mine and the Big Bus - took the Velanthavalam route from here on - the road was narrow and not in great shape. Both buses ran one behind the other. A while into the run, the Shama guy asked us to go ahead (he called up our driver), since he was not very sure of the route, while our driver knew the route better.

We ran through Kozhinjampara, and reached a bridge - the bridge was closed. They had built a wall across - but the wall was broken in the middle - wide enough to let buses through. It was tight though - the cleaner of our bus got off to guide the driver through the gap. The bus still hit a stone and we got a small scratch. At the other end of the bridge, the cleaner had to move some stones to make way. As we exit the bridge, I saw there was two multi-axles behind us! Not just the Shama! The other bus looked like a Merc-Multi to be, especially due to the positioning of the lamps. We stopped near Palakkad bypass - the driver wanted to see how big was the scratch. The Shama driver too joined us in the inspection.

The Third bus was indeed a Merc-Multi: Was the Bharathi Multi running to Changanassery. We over took the Shama and the Bharathi soon after Palakkad bypass and we got rushing towards Thrissur. I slept off again - I woke up only when the bus stopped at Mannuthy bypass - even the worst of roads did not wake me up! A passenger got off at Mannuthy - and we headed towards the town. The cabin lights were switched on - too bad, since other passengers too were woken up. The cleaner came about to wake up those who were alighting at Thrissur. I asked him if the bus would be going towards the bus station - no came the reply. So I had to get off at Thrissur Round - I was dropped there at 0558. The Shama Big Bus came right behind. It was a tough task getting a rick from there at that time - but I did manage one - the rest of the journey on my favourite KSRTC. It was RNC170 that took me from Thrissur to my home in Kodungallur.

Concluding remarks: The service was good. The cleaner and the drivers were well behaved. The cleaner responded to passengers' requirements. The sad part was playing a movie well until midnight - this could've been avoided since the bus leaves at 2130! They did stick to the timetable, and the driver did not drive rash - no overspeeding or harsh braking. I'd surely try the service again!
Busfanning