The ocean of milk..


It was chilling cold – sending shivers through my spine – I get off the train. Armed with a flashlight, I find my way to level ground. In the mean time, the locos let off a long horn, and starts off with a jerk. Jayasankar and me walk on to the other line to let the train clear off. Behind is the station building, which was well lit at that hour. The clears off, and we walk towards our shelter for the next two hours. It is a small chapel – with a couple of low height walls which serve as a bench. We settle down on one of them, rest our bags, and try to catch a few winks.
We barely manage to sleep, while the chugging sound of the DG3As reverberates across the Ghats. The loco pilot kept blowing the horn to break the eerie silence of that hour – silence is not an apt word here. The roar from the waterfall nearby filled the atmosphere. All of a sudden, we see some flashlights across the line – a group of about 20 people from Maharashtra too had gotten off the train. They too entered the same shelter as we were in – flashing their lamps, they ensured we could not sleep. They talked aloud, and made a mess of the entire area. Jay somehow managed to sleep, while I struggled to sleep.
Bonggggggg..... jing jing jing jing jing jing..... bboonnngggggggg! WDG4 twins crawl in, and stop at the starter, a few metres away from our camp. The guys sitting there joke: “Why are they ‘timepassing’??” The locos go away – only to remind us about their presence with the reverberating noise. They kept honking as well. I struggle again to sleep – only to be disturbed by the chaos created by the reckless guys. 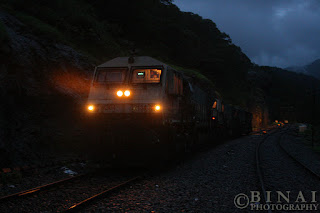 My watch ticks past 6 AM... Another honk. I woke up Jay, and alert him of the diggies coming in. Jay, who was asleep, jumps up in excitement. We head towards the tracks to take some pictures. It was a triple consist – I did not notice their numbers. The locos came in and stopped right in front of us. The headlamps gave us the picture of what lay ahead – the yellow board beside the tracks read “Dudhsagar”!!! It was a dream come true for me – I had been planning to come here for three years now. I had to abandon my plan every time – but this time, I was determined to make it.  Jayasankar has been visiting Dudhsagar like an annual pilgrimage for the past three years – this was my first trip to this place. (Not exactly the first – had travelled through the place by train two times in the past). 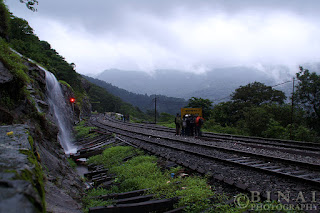 It took me real long time to sink into reality – it was still cold around, but the excitement of having made it to the place at last kept me running in high spirits. I and Jay had drawn up a plan to trek down the ghats – 12 kilometres to Kulem. Our first priority now was to have our breakfast – we had packed biscuits and cakes from home – we topped it up with flavoured milk (from Nandini!). After breakfast, we slowly set off. I stopped every 20-30 metres to take a photo – while Jay meant business. Jay kept firing on all cylinders – he was brisk. Tagging along a three digit load, my speed was much slower. Intermittent showers meant that we had to always hold the umbrella. 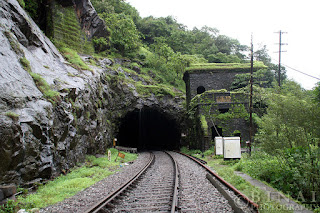 It couldn’t have been more foolish of me – I had left my weather coat at home! I was at the risk of getting wet – plus the cold environment kept me slightly tensed. On starting from Dudhsagar, one crosses the old Dudhsagar cabin, which is located right at the mouth of a tunnel! This was my first ever experience walking through a tunnel – it was chilling cold inside, and there was water dropping off at the portals. A good flashlight ensured that I did not trip anywhere. The roar from the waterfall was getting louder as we exit the tunnel – we walk past a curve. I see Jay standing in the middle of no-where, pointing his fingers upwards – Wow! That is the first sight of the waterfall! 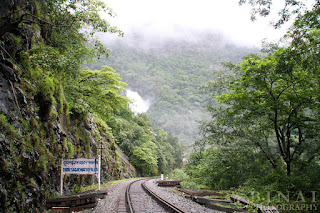 We walk closer to the waterfall – In the meantime, I take more snaps. As we near the falls, sprays get stronger – the entire air is misty, saturated with fine droplets of water. We finally reach the bridge – the one across the falls. I take a couple of quick snaps – it was very windy, and the water sprays were too strong. I got wet in hardly a minute! Just as we walk past the falls, it starts pouring down – Jay asks if we should take a break or continue – I chose to continue. The tracks were slippery – thanks to the heavy tree cover, which keeps water dripping all the time. We continued our slow progress. We cross another tunnel, and reach a signal - this was a Warner signal – its unique in its appearance. It has two light units placed one above the other – the one of top was green, and the one at the bottom was red. This signal indicates “Caution” – and is used in 2-Aspect signal territory. 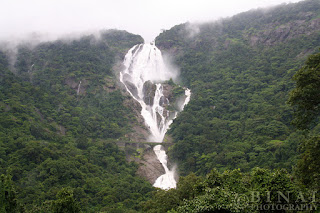 We stood around looking at the beauty of the environs – that served as a break for us. A few metres ahead, I get the first proper view of the massive falls. Dudhsagar – literally translated to an “Ocean of Milk” – kept its name today. It surely was an ocean of sea – from far it felt as if milk was flowing down a gorge. We continued walking – another tunnel later, we reach the “View point”. It is here that one can see Dudhsagar in all its beauty – the stone bridge that carries the railway line appears miniature when compared to the majesty of the waterfall. We take a 10 minute break – we covered 2 kilometres in about an hour including umpteen breaks. 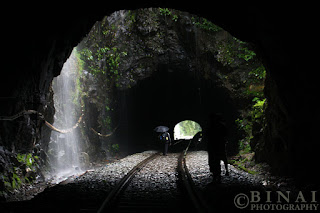 After the viewpoint, my camera was safely packed in a waterproof packet and left in my bag. It started raining heavier by now. The tracks got even more slippery as we proceeded towards Sonalium (the only station between Dudhsagar and Kulem). It was getting tougher to walk – heavy rain, plus slippery nature of tracks made the walk difficult. We were, however, determined to accomplish our task. The line passes through dense forest from here on – the tracks have very little space to its sides. Another hour later, we slowly approach Sonalium. Sonalium Home signal came as a sigh of relief for me – that meant another break was in sight.
Jay walked past the Home signal and directly entered the loop line – but he reverted to the main line soon after. I too entered the loop line, and understood why he switched lines! The area around the points of the loop line had wooden sleepers! They were very badly slippery – walking on the ballast bed was the only way out. Jay paused mid way to the station – I caught up with him. He was exhausted – I was partially exhausted, but was not very sure if I could make it to Kulem – that was 8 kms ahead. Jay took shelted outside one staff quarter – I unloaded my baggage and stood in the shelter. 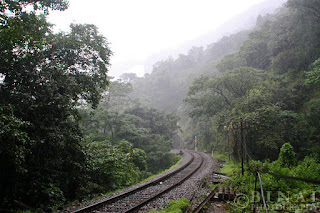 Jay was badly exhausted – a combination of inadequate sleep and some other factors made this veteran accept defeat very early – being a novice, I too thought it was perfect for me too to stop. The rain worsened now – there was no sign of the rain even reducing! The staffs on duty at the station were relaxing – chatting aloud. Off-duty staffs were just waking up. About 30 minutes after we stopped, the station staff announced the arrival of the Howrah bound Amaravati Express. Just as the pointsman came out, he asked us which direction were we headed to – when we replied “Kulem”, he said the next movement to that side would be at 1100 hrs – it was just past 0920 hrs then.
A couple of minutes later, WDM3A #14031 coupled to #14041 of Gooty came in with the Amaravati Express. The train took a 4 minute break at LIM (Sonalium). The train headed out at 0929 hrs – the bankers were WDM3A #14057 and #14032 of Gooty. I was back in our “shelter” – by now Jay was fast asleep. I had a small chat with the pointsman, who said a “freighter” was expected soon, followed by the Poorna Express – both heading towards Kulem. The pointsman came and alerted us soon as the clearance for the incoming freighter was given – I woke up Jay, and we quickly grabbed out belongings and rushed towards the starter. 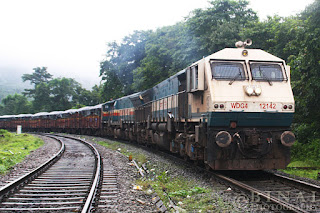 In the mean time, an Up-going freight – a loaded BOXN rake hauled by twin WDG4s and banked by triple WDG4s came in. Just as we reached the starter – we saw that it was already set to proceed. The down-going freighter – a Penta WDG4 consist, running light – went past without stopping! Both of us were dead tired to walk back to the station building, and decided to sit on a pile of sleepers kept there. It drizzled on and off, but thankfully did not pour. Around 1100 hrs, we heard a horn and the characteristic ALCO engine noise – Hurrah! Our train to Kulem was approaching! The horn got louder – we though the train was already in Sonalium. But the train was no where in sight.. 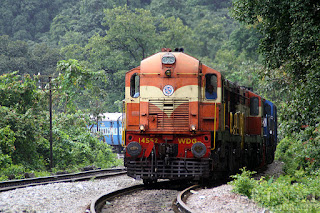 We turn back – the rake is still at Dudhsagar! A blue speck was clearly visible up in the ghats – Dudhsagar station is visible from Sonalium station. The train took a good 16 minutes to reach Sonalium from Dudhsagar – a distance of 4.11 kms! Sharp at 1118hrs, a triple loco consist appear around a marvellous ‘S’ curve at Sonalium. Out of the three, two were the breakers and one was the main power – The breakers were WDG3A #14552 and #14587, both from Gooty – and the main power was WDM3D #11348 of Pune. We got into the coach that stopped near us – it was a sleeper coach. Jay chose to doorplate, while I got on to the TTEs seat. The rest of the run was uneventful – the train crawled the next 7.98 kms to Kulem. We got off at Kulem, rushed to the ticket counter, took a ticket and we boarded the passenger bound to Vasco – we were joined by some more guys from IRFCA (thats a secret!). There ended a trip that I was longing for since long!
railfanning