on March 27, 2011
Like every movie, this one too starts with a shot of the sun rising in. We start off with lots of media personnel waiting outside a hospital, eagerly to hear that the chief minister is dead! Interestingly, a daily newspaper starts composing its front page at 6.15 in the morning!!! The name of this newspaper is very similar to the mouthpiece of the Communist party in Kerala. The party secretary arrives at the hospital to enquire about the current status of the Chief Minister - he arrives in a joyous mood. Moments after he arrives at the hospital, the doctors come out of the ICU and announces that the CM is safe! The party secretary returns with a gloomy face!

The doctors realise long after the CM goes back home that he was poisoned! The chief doctor (played by veteran actor Madhu) calls up the police to inform the matter. The shocked police officers brainstorm, and immediately decide to set up a special officer to investigate the issue. No guesses who the officer is - there comes a bullet round the corner. Perumal (Mammootty) rides a Bullet all the time, with a sun-glass all the time. Perumal storms into the brainstorming session - he over-rides all his superiors, including the DGP! No where in the movie do they reveal the rank of Perumal - in the earlier part of this movie (August 1), he was a CB-CID.

Oh! Did I forget to say this - I am talking of the latest Mammootty flick, August 15. Directed by Shaji Kailas, produced by M Mani (of Sunitha Productions). Story is by SN Swamy - er! We don't need a story here - its the same as August 1, with just a few edits here and there.

The investigation finally begins! Perumal continues to run around on his Bullet. The re-recording went haywire at many places, with the sound of a Pulsar being used instead of a Bullet! I never knew Bullet came with an electric start! Very much like his favorite ride, Perumal loves firing bullets here and there - he fires a bullet even to pin a paper on the wall! Perumal is too stylish - and the camera struggles to keep pace with Perumal! Far too many close-ups make watching a pain for the viewer.

The villains are exposed too early in the movie. The killer, played by Siddique, is not even a shade of the role played by Captain Raju. Captain Raju was stylish, while Siddique struggles hard to keep up with the original. Siddique presents himself with a unique gait, and a very peculiar way of pronouncing words. While Captain Raju played many "fancy dresses", Siddique plays only one. Sadly, Siddique doesn't modify his dialogue render according to the role he is playing. 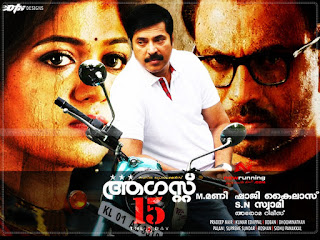 The Tom and Jerry show starts soon after the first half, and Jerry always proves himself smarter than Tom. I guess you know who tom and jerry are (for the uninitiated - Tom is the hero). At one poin, the villain comes very close to the hero, but our hero sadly looks at the villain escaping - no attempts are made to capture or shoot down the villain! The game continues on till the climax, where the villain is shot dead by the hero - in a manner very similar to the original version! And a burial too is done, with the cross reading "unknown"!

There are far too many similarities between August 1 and August 15 - both run on more or less the same storyline and screenplay, except a few changes (the changes are far and few). The Chief Minister's role is played by Nedumudi Venu (playing VG), while the role of the party secretary is played by Sai Kumar. Lalu Alex plays a very humorous ADGP - who is more worried about his shirt crumbling than any other issue! There are many situations where viewers are irritated by the ADGP's mannerisms - but succeeds in tickling funny bones. Almost every sequence featuring Lalu Alex (playing Jose Zackaria) evokes comedy.


Perumal, on his part, too tries to deliver a few comic dialogues. Perumal frequently visits the Police Cyber Cell, which is manner by three executive style-dressed girls - much like a customer care centre of a mobile phone operator. C'mon! A bit of reality here would've helped - when did police department start providing modern dresses to their staff? 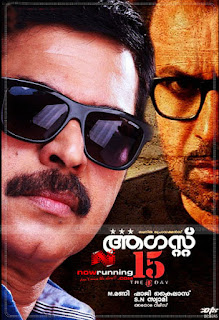 The screenplay has a lots of loop holes - but none seemed predictable! The story has been presented in a decent manner. Quite a lot of scenes appear similar to earlier Mammootty films like The Truth, August 1, CBI Dairykurippu, etc. The presentation is not gripping, but does keep the viewer glued to their seats. Mammotty presents his character with a very special gait - walking with his hands waving behind. He always walks in slow-motion, with his sun-glasses on. He even takes on the goons single handed, that too without even removing his sun-glasses!The climax is somewhat innovative - the villain comes up with a very unique idea to kill his target - but finally gets killed by our here (as usual).


Verdict: Average. The movie has nothing special to talk about. Its watchable. I'd give it at 7 on 10. (All the marks go to Mammootty for the excellent character he has played!).
movie review