on March 24, 2011
Setting records of sorts, the multi-starrer movie, Christian Brothers, was released at over 300 centres across India. The movie opened at over 150 screens in Kerala alone - following the current trend of taking home a big opening in the first week of release, and then forget the movie forever. Christian Brothers is no different.

Christi-an Brothers is a movie cut out to meet expectations of just the fan bases of the three main stars in the movie. Christian Brothers is among a series of multi-starrer movies that are getting ready to hit the silverscreens. This movie has Mohanlal, Suresh Gopi, Dileep and Sarathkumar as the lead "heros", and Lakshmi Gopalaswamy, Lakshmi Rai, Kavya Madhavan and Kaniha as the lead "heroines". The word "Heroine" is a mis-nomer here, since none of the ladies in the movie have any concrete role to play - other than play eye-candy. The script for the movie was penned by Udayakrishna and Siby K Thomas. Music by Deepak Dev and Visuals by Anil Nair. The movie by directed by Joshi... err! Joshiy. 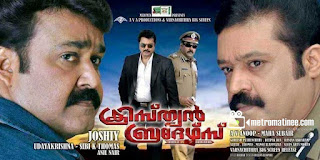 This is the umpteenth movie that shows the "Dad of the hero" doubting the hero, and blindly believing the villain, only to realise at the end of the movie that he was wrong, and then apologize to the hero. The Villain then harms the "dad", and the hero rescues him. The very same thread happens here as well - Sai Kumar (playing Palomattathu Varghese Mappaila) has two sons - Christi and Jojy. Mappilai is an ex-serviceman, and a man of principles (Like every armyman in movies!). He gets disappointed after both his sons divert from his ambitions - he 'kicks' our here (Christi) out of his house, when the villain (Suresh  Krishna, playing Georgie) tells Mappilai that Christi is an underworld don in Mumbai! C'mon! Haven't we seen this happening in other movies as well??

The movie starts off in Munnar - unusually, the Baddies are introduced first - the villain brigade is led by Vijayaraghavan, ably supported by Jayan, Biju Menon and Subair. The villains do nothing but keep walking around a pool sipping liquor, and killing people at will (like every villain). Biju Menon plays a police office (Hariharan) in this movie. Although the title of the movie hints at a movie portraying a family feud - this movie is 'daringly' different. Christi (Mohanlal) is a renowed Police informer (however, the visuals actually gives a feel of him being a don, than being an informer), while Jojy (Dileep) is a joyous youngster, who studies theology and is in the process of becoming a priest. 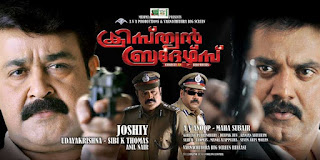 Jojy goes to Rome to finish his theology studies, and return as a priest - but as fate has it, he falls in love with Kavya Madhavan (Meenakshi) and quits his studies. The love blossoms through a song - it would not be surprising if you felt the song resembles the song maine pyar kiya from CID Moosa. Dileep plays his characteristic antiques - not much different from his trademark "Oru Kvachu Free" dialogue, from the 90s (Dileep was an actor in Asianet's Comicola, the predecessor show to the current Cinemala). And, it turns out that Meenakshi is the daughter of the state (Kerala) home minister (played by Devan). As you guessed it right, Meenakshi is quickly "packed" back home, and Jojy is harmed. Meenakshi disappears from the airport - er! She is kidnapped from the airport.

Enter our Hero - Mohanlal. Christi is called to Kerala to help secure the release of Meenakshi. And, true to the name of a Malayalee, the Minister hatches a plan to trap Christi once Meenakshi is trapped - Come our second here: Suresh Gopi, who plays a police office (I forgot the name of his character - it was some vadakkan), as usual. Suresh Gopi looked too "disfigured" to play a police officer in this one - but he, certainly, has preserved his half-kilometre long dialogues and the "I'll die for the country" attitute. He is entrusted with sending Christi behind the bars - which he does. And, like in every movie, all the "goodies" get together, and kill all the baddies!

The movie will remind of many recent movies - Twenty-Twenty, Pokkiriraja, Sphadikam, etc etc. (the list would go on and on...) The overall story (oops! It doesn't have one - so I'd call it a Thread) is the same old mix masala like Twenty-Twenty. An array of stars battling each other, with no particular story. There are few dialogues which tickle funny bones. The director has tried to bring in some slapstick comedy, in the form of Suraj Venjaramood playing a very annoying character - the jokes, or what ever you call it, are stale and often irritating. Harisri Asokan plays a marriage broker yet again.

Salim Kumar has played a pretty decent role - just the right amount of dialogues and his mannerisms are well controlled. The four heroines have been wasted - except Kaniha, who has a few dialogues, the other three heroines are around only for the sake of being around. All that the two Lakshmis (Gopalaswamy and Rai) do are dance around in songs, and then vanish. There are three songs in the movie - one is outright annoying, while one is added only for the sake of skin show.

The movie runs for three solid hours - perhaps one song and a few scenes less would've made the movie a bit more engaging. The song Sayya Ve is added solely with the purpose of lengthening the movie, and to add some skin show to the otherwise bare movie. The song Moham Kondal is just about hummable - but the picturisation is somewhat irritating. The song Karthavey is outright irritating - and the choreography imitates the song Maine Pyar Kiya (From CID Moosa) in every step.

I felt badly disappointed at the end of the movie - seriously upset at the story, or lack of it, of the movie. The director has been successful in giving equal importance to all the stars (only the heros) in the movie, in what could be called a soup of ego. The movie questions in the logic of the viewer at many points, and be sure to switch off your brains before you start watching the movie. If you have a DVD of Twenty-Twenty, you are better off watching that at home. If you have lots of money to spare, or free tickets to the movie, be sure to leave your brains at home. Now, all the focus is on China Town, the next multi-starrer mash-up.

On a side note, I am glad Thilakan has not been wasted in this movie - he should be glad that he is not part of this poor show.
movie review