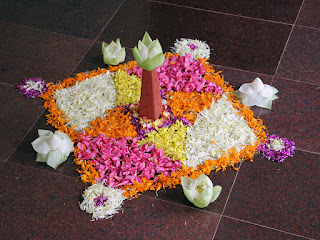 Yet another Onam has arrived! Kerala is in full force celebrating this harvest festival. Onam is celebrated in the month of Chingam, which happens to be the first month in the Malayalam Calender. Onam is historically considered to be a festival when the mythical ruler of Kerala, Mahabali, returns to the land on an annual visit of his old subjects.

All Keralites celebrate onam irrespective of their caste or religion, with equal spirit. Every household would have floral design made near the door step to welcome the mythical ruler to their home. Lunch is usually marked with a sumptuous meal, punctuated with a variety of dishes suiting every taste - from sweet to sour to spicy. I have written about Onam many times in the past, and would not like to repeat the same.

Quoting my own post last year (read it here):

Onam is celebrated to mark the Harvest season, and also to welcome the mythical king Mahabali is regarded as the best ruler the state has ever seen. History has it that Mahabali was an Asura (or Devil) and he ruled over all the three worlds, including the Devas. Annoyed by this, the Devas approached Lord Vishnu for help. It is said that Lord Vishnu approached Mahabali in his Vamana avatar. Mahabali was performing a Yagna at that time, and he had promised to fulfill the needs of any one approaching him. Taking advantage of the situation, Vamana said to Mahabali, "You need not give me anything great. It is enough if you give me that extend of land covered by three footsteps of mine".

Happy Onam to all Keralites!!!
Celebration