on January 15, 2010
The grand event of the millennium - the longest Solar Eclipse, not expected to be overtaken until 3043 - happened today. Solar Eclipse in a phenomenon that occurs when the moon passes between the Sun and the Earth so that the Sun is fully or partially covered. This can only happen during a new moon, when the Sun and Moon are in conjunction as seen from the Earth. At least two and up to five solar eclipses can occur each year on Earth, with between zero and two of them being total eclipses.

The last Solar Eclipse that I remember seeing was more than decade ago - perhaps in the early 90s, during my schooling days. Being from a semi-conservative background, and staying in a very conservative society, I still recollect that day - it was a holiday, and I remember seeing the sun using a couple of X-Ray films for protection. Between the mentioned period and today, quite a lot of eclipses have taken place - but not a single one that I could witness.

Today was a very great day in life - Radio stations were blarring news about the solar eclipse since morning - the speakers were busy clearing mysteries about how food would turn toxic if you have them during the eclipse, and how one could develop skin allergies if exposed to the sun during the eclipse. Gossips galore, our college canteen did not have any food this afternoon :(

Being very curious to know how the sun looked, I was madly in search for some kind of a semi-opaque substance. Little did I know that a lecturer from our Pharmaceutical Analysis department had "invented" his own Eclipse Goggles. He had coated smoke (from an unknown chemical) on glass slides and used them to look at the goggles. He was kind enough to lend it to under-graduate students to let them have a look at the sun. 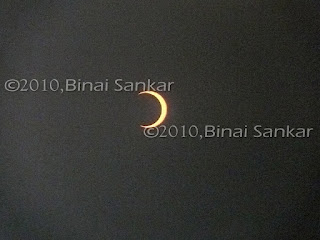 This was what I saw this afternoon... sorry for the watermarks - can't help it given the plagiarism across Indian media.
Given the huge turnout to the look at the sun, our lecturer got another slide prepared so that more audience could have a look. The queue got longer with teachers and office staff too joining in. In between the queue, I somehow managed to get hold of the slide to get some images. By then, the "ring" had been broken. Nevertheless, the chance to photograph the celestial event was not to be missed.. is it?

So, How was it to be at college during the eclipse? I had a very busy start to the day. Lots of work and too little time to even peep out of the window. I looked out for the first time at around 1100 - the sunlight appeared much dimmer than normal. As the clocked ticked towards 1200, the light started getting dimmer. By 1300, it appeared like a very cloudy day - a cloudy evening to be precise. It was fun watching the sun though :)
Others