on October 23, 2009
Warning: This post may not be palatable entirely for normal audience... reserved for the ferroequinologists ;)

The past week had been one that almost all students in my department (pursuing Post Graduation in Pharmacy, M.Pharm) in never like to forget in their life. The college was organising a two day workshop program on what could be the new buzz word in the Indian Healthcare arena - Pharmacoeconomics. While the subject in itself is interesting, and relatively simple to learn, its applications would stir up hornets' net among medical professionals. I wouldn't go into the details of the program, or the subject, in this post, since the intention of this post in entirely different.

The planning part of the workshop commenced in the last week of September, and the program was scheduled for October 19-20. Interestingly, my department worked almost continuously since then, without much breaks in between. Sundays turned to be working days, and the college timings seemed to extend to 6PM instead of 4.30PM. It so turned out that I remained in college till 1900 on most days. The workshop was no less than a heavy challenge for us - when it was just two weeks into the college. I am sure this two day program - and its planning - developed an amazing bond within the 10 of us (we are ten students specialising in Pharmacy Practice).

The first day of Workshop went without much glitches, and the day resembled a normal seminar - with not much to emphasise on. The first day of the workshop was held at the AIMS Building, while the second day was at our college building. The college building is about 750 metres away from the AIMS Building. (For the uninitiated, AIMS stands for Amrita Institute of Medical Sciences and Research Centre, a 1200-bed super-specialty tertiary referral hospital in Kerala). Our college building has three floors (plus the ground floor). The auditorium is situated on the third floor of the building. The auditorium is not air-conditioned, and is often poorly ventilated.

The second day was very tiring for each one of us in college, and most of us dropped dead tired by evening. To add to the misery, we had to make some presentations to the audience. This made us more tired. At the end of all these, I headed out of the college at 1750. There is one bus that heads to my hometown from AIMS at 1800. This bus is a habitual late-runner, and hence I had some feeble hopes of making it to AIMS in time to get the bus. I made a brisk walk from the college to AIMS, and made it there at 1758. The bus was no-where to be seen. I enquired with a couple of security staff, but their were unsure if the bus had left.

I headed to the security desk at the main entrance to check if the bus had arrived (the guys at this counter make note of each vehicle entering the compound). They appeared unsure about this bus. While talking to the guys, I noticed something special standing on the railway loop line right outside the campus. I was sure the loco was nothing normal - but something that I had been wanting to see for long. My focus now shifted out of the campus - I cut short my talk with the security guys and headed to the track.

There was one BCNA rake parked on the loop line, with the loco in the direction of Ernakulam. I headed towards the loco - the hot lady remained waiting for me there. The green loco - with an yellow belt - was making her status known with a constant hum. The LP was standing ahead of the loco, closer to the starter, while the ALP appeared to be resting inside the loco. The green lady was warm - the blowers were at full force. That was my first close encounter with the hottest freight loco on IR today - a specialist at wheel-slipping - so famous that she gets looped every time it rains! 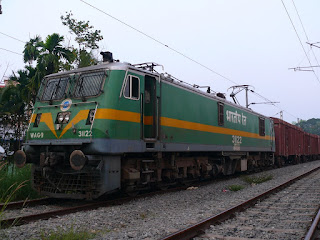 The lady was WAG-9 #31122 from Lallaguda. The load appeared loaded. I made a walk around checking seeing the loco at close angles. Since we had the workshop, I was carrying my camera - the next 5 minutes was spent photographing the loco from all possible angles. However, light was already gone (the time was past 1815 by then, and with winter approaching fast, it gets dark by 1830). With low light, all I was getting were shaky shots. Then came the camera's burst magic. Finally I concluded my photography session and headed to the railway station.

While walking through the railway station, a twin Ernakulam WDM2 led tanker rake headed towards Aluva. The starter was red even as the locos (Working the tanker) crossed the SM's office. The starter often goes off late, since the signal depends on the gate right ahead. The starter went green just as the train started screeching to a halt. Bingo! The locos notched up heavily, while two volcanos erupting simultaneously, it was all about a smoke cloud appearing, and the "tak-tak" clatter gaining pace. The twins put up an amazing show pulling out the rake - the train cleared the station in no time since then. By now, I finished walked the entire length of Idappalli station platform, and almost exited the platform.

I heard a sweet - and melodious - horn as my foot touched the road. I stood there hearing the lady's sound and then heard the familiar thud of the LP checking the rake's coupling integrity. The train then started forward with a jerk, and I was almost near the level cross by now. From there, I deviated my way and headed straight to the bus stop. Got a bus after about 15 minutes of waiting, and had to stand for atleast 35 minutes before I got a seat. But then, the pleasure of meeting the hot green lady - with an yellow belt - made me relaxed. It was then eagerness to reach home, and check if the images came well...

Finally, I saw a WAG9 up close, in flesh and blood. My earlier dates with this lady were from speeding trains, seeing her as then streaks across the camera. The lady looks cool in person - hope she visits my territory more often, and ensures she is around when I have my camera. I know, I'm being too selfish.... but every railfan is selfish for something :)

PS: Oops! I completely missed this - the entire sequence narrated above happened on October 20, 2009.
railfanning