The Poor man's way to travel...

on August 19, 2009
Airconditioned train travel was always away from the reach of most common men in the country, before 2006. The then railway minister, Lalu Prasad Yadav, announced a revolutionary concept, to bring AC travel to the masses. Garib Rath, or Poor man's Chariot, was introduced during the railway budget in 2006. The first Garib Rath in the country was run between Saharsa (in Bihar) and Amritsar (in Punjab). The train was flagged off on October 4, 2006. What was revolutionary in these trains was the fact that the fare was much lower than AC coaches in normal trains.

Garib Rath trains have high-capacity AC coaches (Sleeper and sitting). Sleeper coaches accomodate 78 passengers (compared to 64 in normal AC 3-Tier coaches), while Sitting coaches can take in 108 passengers (compared to 71 in normal AC Chair Car coaches). The increase in number berths (in AC Sleeper coaches) has been achieved by slightly reducing the width of coaches, reducing leg space, and removing space wasted for linen storage and power equipment. The train survives on lower fares by doing away with frills like bed-rolls and also increasing the number of seats. Normal trains subsidise non-AC accomodation by charging much higher fares for AC coaches - Garib Rath coaches do not charge for these subsidies and hence charge much lesser fares.

Garib Rath coaches also have side-middle berths, which have been accomodated by raising the internal height in these coaches. These coaches are powered by Generator cars, which help in making these coaches lighter, and therefore allow then run at higher speeds. The first Garib Rath was painted in the age-old Maroon livery. The second one had a Golden band running across the length of these coaches in addition to the Maroon body colour. The third rake onwards, had an eye-catching Gold on Olive livery. 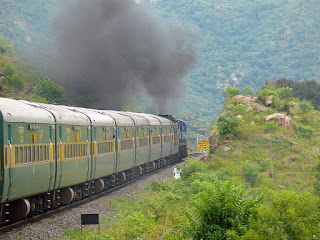 A Garib Rath rushing off to its destination...
The first Garib Rath in Kerala came in February 2008 - in the form of the Kochuveli-Lokmanya Tilak Terminus Garib Rath. This train also became the second-fastest train connecting Mumbai to Kerala. Excellent timings and the right days of run made the train a run-away hit among passengers. The second Garib Rath to Kerala came in February this year - running between Kochuveli and Yeshwantpur (in Bangalore). This train was initially born as a special train between the two cities, running for about three months. Notwithstanding wrong days of run and bad timings, this train is now on the verge of becoming a hot hit among passengers.

Garib Rath trains soon earned a new name in Kerala - Garibi Rath - or the Chariot of Poverty. The number of passengers using these trains for intra-state travel is on the rise - low cost AC coaches has its takers for sure! There are a couple of write-ups about some Garib Rath journeys coming up soon... stay tuned... In the mean time, you should have a look at this album to catch some glimpses of the interiors of this revolutionary concept.
railfanning

Unknown said…
So, the Garib Rath indeed looks like a promising train! I hope to take it on my visit to Guruvayur in March next year. I hope six feet tall people can sleep in peace without making other passengers fall while sleeping on the Upper Berth. My loyalties are slowly changing from Mangala Lakshadweep Express to Garib Rath and my choices don't change so easily :D.
19 August 2009 at 13:49:00 GMT+5:30