Garib Yathra: To Bangalore and back... Part-II

on August 31, 2009
As the purpose of my visit to Bangalore comes to a good end, it was time to begin the pursuit for the return ticket. Be it a weekend or a weekday, getting a ticket from Bangalore to Kerala is a task in itself. Fortunately, on three days of the week, a very good alternative is available - in the form of the Yeshwantpur - Kochuveli Garib Rath. With over 1200 AC berths, the train is a real cheap alternative, that one could actually walk into. Over 400 berths were available on this train (#2257) and one was booked quickly. My request for a lower berth went through, and was allotted berth #16 (Lower) in coach G13.

The Garib Rath departs at 2100 from Yeshwantpur, every Tuesday, Thursday and Sunday. However, a mis-understanding meant that I believed the departure time to be 2130. Accordingly, started from home at around 1900. I was at the wheels, driving a Toyota Innova. Thankfully, the traffic on the road kept flowing, without much hiccups. Driving through Bangalore's traffic during evening hours is a pain in itself, and the pain magnifies as we near Sampige Road and Yeshwantpur. Call it fortunate, I reached Yeshwantpur at around 2030. Instead of entering the station through any of the main entrances, I entered the station through the "Parcel entrance" from the highway, on the Bangalore end of Platform 6.

I had very heavy baggage to lug across, and pulled it through a trolley path. An unknown train was parked on Platform 6. Platform 4 was occupied by the Karnataka Sampark Kranti (which arrived, may be, an hour back). Interestingly, that was my only sighting of a WDP4 on that trip to Bangalore - WDP4 #20040 was parked near the rake. I took a night photograph of the loco. While the camera was in process of clicking the dippy, WDM2 #16566 of Guntakal pulled in to platform 5 with the rake of my Garib Rath. My coach was the 5th coach from the rear end of the train. I loaded my baggage into the coach, and stored them at my berth. Locked up the baggage, and then decided to check the power for my train.

While walking towards the loco, I noticed that the LED signboard on the platform were displaying the departure time of my train as 2100 - instead of 213o that I had assumed it to be. I had a shock-wave across my spine on seeing the departure time - had there been a traffic snarl, I would not have made it to the station in time. I reached the loco, and found a twin-set getting attached to my train. The locos that were to power my train that night was WDM3A #14057 (leading) and WDM3A #18782 (trailing) - both from Gooty. Therefore, my return train too had twin WDM3As to work the 18-coach load. 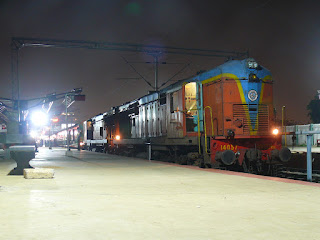 Twin Gooty WDM3As preparing to start the Kochuveli Garib Rath from Yeshwantpur...
On my way back to the coach, which was the 14th from the loco, I noticed the reservation chart on each coach. On an average, there were about 7 berths vacant in each coach, and one coach - G5 - was almost totally vacant. The occupancy for the train was about 85% on an average. My coach - G13, WACCNH1 08132 - was built by Rail Coach Factory, Kapurthala in December 2008. The coach was well kept and air-conditioners were at their full pace turning the coach into a refrigerated container. My co-passengers had all arrived, and were settled down. I had my dinner well before the train started. We started from Yeshwantpur at 2104 - with a delay of 4 minutes.

The run from Yeshwantpur to Banaswadi is painfully slow, and is better described as a crawl than a run. We reached Banaswadi at 2131, and left at 2134 - a delay of 7 minutes. By now, passengers were preparing to sleep. Catering guys were busy selling dinner at this time - Veg and Egg Dinner were on offer. The train crawled till the moment we crossed Chennasandra By-Pass cabin. Once we crossed the cabin, the LPs let the beast show their worth. We rushed through Hosur at full speed by around 2234. By now my bed was ready, and I decided it was time to sleep. I fell asleep in no time. I woke up at around 0330 - for an unknown reason. I had kept an alarm for 0530, and hence decided to sleep again. I slept till about 0545. We were near Vallathol Nagar when I finally got out of the berth. We made a brief halt at Wadakkanchery.

We left WKI after a three minute halt. We crossed the Thrissur - Kannur Passenger just outside Mulagunnathukavu - WDM3D #11214 of Erode was in charge. We slowed down shortly after Punkunnam. We pulled into Platform 1 of Thrissur, at 0622 - delayed by 7 minutes. I had a tough time hiring a rickshaw to head to the bus station, with all the baggage that I had. After about 5 minutes, got a rickshaw to the bus station. I got a bus within minutes of reaching the bus station - but what followed was yet another painful crawl. I reached home with a couple of minutes to spare for 8, ending a marvellous journey.

The Garib Rath is the best travel option currently to travel between Bangalore and Kerala. It is the fastest train, and the cheapest option. Expecting some more journeys this year, and more reports right here...
railfanning