Garib Yathra: To Bangalore and back... Part-I

on August 24, 2009
A journey to Bangalore, from my new base - Kodungallur in Kerala - was on the cards for a long time. Road journey was ruled out at the beginning itself, and the ever overflowing trains were the only option. The only train that could provide seats at the last moment, was the iconic Garib Rath. A decision to head to Bangalore was finalised post noon on Thursday, August 13, 2009. Headed straight to the booking counter a while past evening, to find an absolutely deserted booking office - at Ernakulam North Station. Booking a ticket took just under 5 minutes, compared to over 90 minutes at Thrissur on all occasions.

The Kochuveli - Yeswantpur Garib Rath Express (#2258) is a triweekly train, and runs at obscure timings (departs Kochuveli at 2000 and arrives Yeswantpur at 1130). This train is usually sparsely occupied, and getting tickets is pretty easy. This time too, there were more than 330 seats still vacant - against a total capacity of 1248 seats. (The train has 16 AC Sleeper coaches, each having 78 berths). My request for a Lower berth was declined, and the system allotted an Upper Berth in G8. I reached Ernakulam Town Railway Station at around 2230 (for a 0015 departure). Platform 1 was crowded to the brim (thanks to Friday), while Platform 2 had moderate crowd. I was given a grand welcome to the station by WDP3A #15524 of Golden Rock, that was cruising through the main line with the Nizamuddin bound Rajdhani Express in tow.

A while later, Golden Rock twins, WDM2 #16882 and #17619 rushed through the station towards Idapilli. Just after the twins cleared the station, Itarsi's WAG5 #23345 arrived on the main line from Idapilli with a freshly painted NMG rake. While the NMG rake came to a complete halt on the main line, New Katni Junction's WAG7 #27373 arrived from Ernakulam Marshalling Yard with a single Caboose in tow. A while past 2310, WAP4 #22380 arrived on Platform 2 with the Chennai Egmore bound express from Guruvayur. The platform was totally emptied by this train.

It was soon time for Mangalore bound Malabar to arrive on Platform 1. The crowd waiting for Malabar was just humongous. Malabar arrived at around 2330 with WAP4 #22269 of Erode doing the honours. The entire crowd somehow managed to fit into the train a while after it arrived. There was no sign of Malabar leaving even as the clock ticked past 2345 (its scheduled departure time). The cause of the delay was soon made public - that was to let Maveli overtake this train. Maveli rolled through the main line a while past 2350. Malabar was given the go through at about 0005. Some minutes after Malabar cleared the platform, the PA system came alive, and announced - "Train number two two five eight.. Kochuveli Yeshwantpooor Gareeb Rath express will arrive on Platform number one shortly...".

The headlamps were visible by now, and I had the mammoth task of lugging my baggage to the place where my coach was expected. My coach was expected to be the 10th from the loco. I reached the place, and saw the headlamps coming closer. The loco passed me - was WDM3a #18724R of Pune. Sooner, the second loco too went through - WDM3A #18651 of Pune!!! Yeah!!! We had twin WDM3As, both live as well!!! I was sure we were to have a rocking journey! My coach - G8 - came at the 11th position instead. I got in and checked my berth - was an upper. I decided to check with the TTE if there were empty lower berths anywhere. He quickly allotted me a lower berth in G6, two coaches backwards. I went to my new berth and settled down. We left ERN at 0033, delayed by 13 minutes now.

We overtook the Malabar express at Idapalli and then embarked on a high speed run. It was raining pretty heavily outside, and the sound of rain water lashing on the coaches was audible inside the coach. I dozed off a while later. The coach was chilling cold, and the temperature was forcing people to hire blankets from the attendants. I woke up a while before 0630. The sun was just rising, and one could see the distinct golden rays shining through a very overcast sky. We crossed the Trivandrum bound Sabari Express, and overtook an unknown train at Sankaridurg. The twins were clearly enjoying with the light load behind. By this time (Around 0650), most passengers in my coach had woken up. The Catering guys were busy selling breakfast and hot beverages. After a quick visit to the toilet, I headed towards the loco. Walked all the way to G16 (the coach, second from the loco). 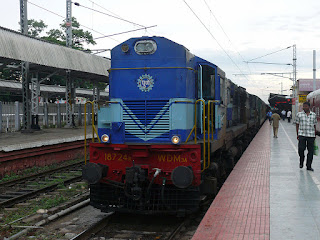 The locos at Salem....
Salem yard had about two freighters, both parked with their loco towards MAS. I jumped out of the coach and headed to the loco for a quick snap and rushed back to G16. By now, the starter had already turned amber. We left Salem at 0725 - about 25 minutes late. I purchased breakfast (Idli and Sambhar) from a vendor on the platform. Surprisingly, the food tasted really good. The train crawled out of the station and we were soon on the main line, heading to Magnesite junction - from where the lines split to Chennai and Bangalore/Mettur Dam. I headed back to my coach, and down the breakfast. We crawled through Omalur and pick up speed soon after we entered SWR territory. 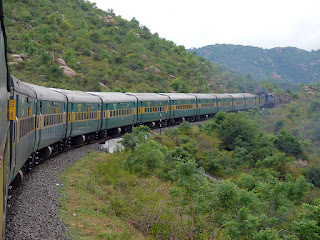 My train at a curve in the Toppur-Dharmapuri Ghat section..
The twins picked speed quickly and we were cruising at around 90kmph in no time. We made a momentary pause at Toppur home signal, and then rushed through the station. Toppur marks the beginning of a ghat section. The section has gradients in the range of 1 in 70. The locos smoked their way up the grade towards Dharmapuri with utmost ease. We crawled through Muttampatti, which had a speed restriction owing to track renewal works. Muttampatti is the second brake test halt for trains that come down the grade. We picked speed after Muttampatti. We halted on the main line at Dharmapuri. The platform was crowded with passengers waiting for the Ernakulam Intercity Express. The day being India's 62th Independence Day, had lots of police personnel roaming around.

Most people in my coach decided to grab the opportunity for a stroll on the platform. The Intercity came after a long wait. The loco in charge of the Intercity was WDM3D #11187 of Erode. We left Dharmapuri at 0907 (after a wait of over 25 minutes). I chose to remain indoors after this crossing. It appeared that most passengers in my coach were regular on the train. Most passengers were attracted to the train by its cost, while many others liked the ease of getting tickets. Whatever be said, the concept surely has been accepted by passengers.

We made yet another halt - this time at Rayakkottai home signal. After about 5 minutes, we were let ahead, and we crossed the Bangalore-Salem passenger here. After this crossing, we had a free run to Bangalore. The train slowed down at Hosur home signal. This evoked some surprise and hope in me. I quickly prepared myself to get down, just in case the train stopped at Hosur. Unfortunately, things were not to be that way. The train picked speed soon after Home, and we rushed through Hosur station at a decent speed. The run was decent till the time we crossed Heelalige. After Heelalige, the train crawled for most of the time till we reached Chennasandra Bypass Cabin. After the cabin, we picked up some speed.

We finally reached Banaswadi at 1123 - delayed by 23 minutes. Most of the crowd alighted here - almost 75% of the passengers in the train. We left Banaswadi at 1126. The train never exceeded 60kmph during the journey from Banaswadi to Yesvantpur. We slowed down further as we neared Hebbal, but never stopped. We slowly crawled to Lotte Gollehalli. The speed dropped even further as were neared Yesvantpur by-pass cabin. The train curved towards the station at painfully slow speeds. The coaching yard was packed with rakes of many trains parked. 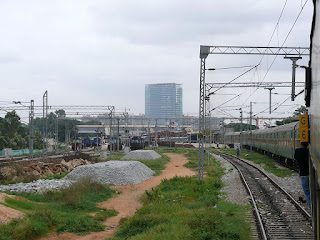 Entering Yesvantpur Railway Station...
We were allotted platform #5. The train crawled past more points to reach Platform 5. The catering guys were the first to jump out of the train. They unloaded all that was remaining in the train. The bed-roll guys to were busy pushing out huge bundles of used linen. I walked over the Foot over bridge, and decided to take the exit at the farthest end to Platform 6 instead of the main exit. My earlier attempt to travel by bus from Yesvantpur to Majestic by bus turned out to be a sour adventure and I decided to adopt a different strategy this time. Instead of exiting via Platform 1, I exited straight on to the highway. I managed to get a Volvo this time and had a very comfortable journey to Majestic. Here ends Part-I of the Garib Yathra...
railfanning