on July 27, 2009
Nila, or Bharatha Puzha (loosely translated as India River), originates in Anamalai hills on the Western Ghats in Tamil Nadu, and flows to the Arabian sea, covering a distance of over 209 kms. Most of the distance is in Kerala. The districts of Palakkad, Thrissur and Malappuram are served by this river. The river is often referred to as the Nile of Kerala. The river is entwined with rich culture and is often very closely associated with the history of Kerala. Bharathapuzha formed the border between the Princely state of Cochin and the British ruled Madras Presidency.

When the British laid the first railway line in Kerala, circa 1862, the line followed a more-or-less parallel alignment with the river, starting a little away from Palakkad till Tirunnavaya. The line was laid in a manner that the line never had to cross the Bharathapuzha, except for a tributary of the legendary river. The railway line crosses the Toothapuzha, near Pallipuram. The river also marks the boundary between the revenue districts of Malappuram and Palakkad.

Bharathapuzha has dried from a lively, rushing river to a small stream - a process which was more of man-made than natural. Endless sand mining ultimately resulted in the river ending up in a sad state, that it is now in. 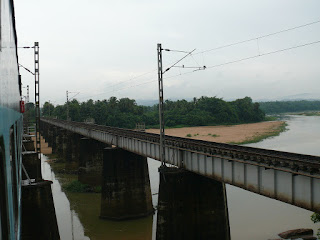 The bridge across Bharathapuzha, near Shoranur...

The first railway line across the river was built by some time in 1901-1902. The bridge was part of an ambitious plan by Shri Rama Varma XV, the Maharajah of Cochin, to build a railway line from Cochin to Shoranur. This line was intended to connect the Madras-Beypore line built by the British. The bridge was initially carrying a metre gauge railway line, which was later converted to Broad Gauge. The metre gauge railway line was taken over from the Cochin State Railway by the South Indian Railway in 1916, and was converted to broad gauge in 1930. 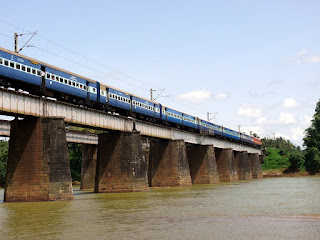 A favorite scene among film makers... train on the bridge across Bharathapuzha...
The bridge across the Bharathapuzha has been a favorite spot for innumerable film makers in Kerala. Bharathapuzha, in itself, is often associated with romance and many film makers are known to have gained inspirations and marvellous story lines from this river. Many movies, notably Dileep starring Sallapam, had most of its sequences shot in or around the river bridge. The bridge is approximately 750 metres in length.

From my innumerable trips across the bridge, in the past many years, had inspired a desire in me - to visit the bridge once. The sight of a train crossing the 14-span metal bridge is one that anybody would enjoy. My desire to visit the bridge was full-filled this Sunday. Myself and fellow railfan, Deepak Murali, headed to the bridge to spot some trains. We had a brief session, with a good majority of it away from the bridge. 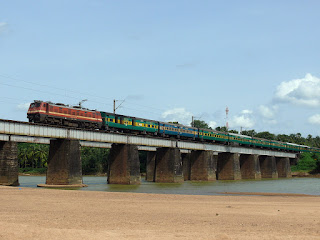 The Mumbai bound Garib Rath express, on the Bharathapuzha bridge...
The most notable of our sightings was the Mumbai bound Garib Rath... the red coloured locomotive with a green-and-yellow liveried rake made for a heavenly sight. The short and sweet railfanning session solved a long-time desire of mine. The bridge continues to be an inspiration to scores of writers across the state. The river is also considered religiously important, and many believe that those cremated on the banks of this mightly river attain nirvana.

In the meantime, the railways continues to hug the river and its romance with the mighty lady continues unabated.....
railfanning

Unknown said…
An extremely well-written writeup! I am highly impressed. Well, I do believe trains and bridges do have something special which makes it a special feature with filmmakers. I remember Mani Rathnam's "Bombay" too had a few scenes of a train crossing the bridge, a few scenes after the Uyire song.
5 August 2009 at 12:45:00 GMT+5:30