on September 14, 2006
Today was just another day for me except for a few incidences! The day began as usual in the morning. On reaching CLA, I was heavily missing my regular dose of watching the Chalukya and/or Punjab mail flying past. I boarded my by-now regular 07:17 Dadar-Ambernath 12-car Fast local. The journey from CLA to VVH (Vidyavihar) was normal. I saw the Matsyagandha sneaking into LTT. Just as our train took the sharp curve towards Vidyavihar station, I saw the Chalukya Express rushing in with WDG3A #13063 in charge. This particular loco was in a turquoise livery and the loco looked cool! I settled inside the coach for the rest of the journey.
On reaching Thane, the first announcement that I heard was that the Madgaon bound Mandovi was expected in the next few minutes. I decided to hang-on. The Mumbai bound Vidarbha came in. The train had all Sleeper coaches of 2006 make. The coaches looked refreshing. The coaches were manufactured by BEML. By now the "humm" of the WDP4 hauling the Mandovi was coming closer. I couldn't control my happiness. By now the Vidarbha was given the starter and the train slowly pulled out. I could see the WDP4 through the windows of the coaches of Vidarbha! The DP4 gave me a shock. That was WDP4 #20012 nicknamed as "Baaz". The Logo of the DLS (UBL) was torn off. 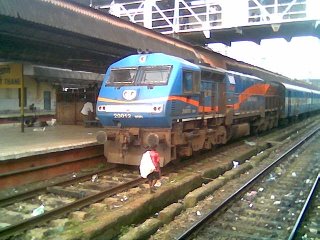 Sorry! All I had was my mobile which has a VGA camera! I couldn't resist taking an image of this beauty!
The loco looked fresh as ever. The colour design was trendy. The train as usual had 22 coaches. I had to rush to college. In the evening, I reached the station by about 16:30 and was surprised to see the 16:19 CST Fast pulling in! This local is an AC/DC one. The train flew through known territories. I spotted the Habibganj Express and Pragati superfast on the way. At Kurla, the Nandigram express rushed past with a WDMx in charge. I even spotted an EMU (based at Kurla) which had a modified cab. The shape of the EMU has been modified a bit. I boarded the 17:03 Belapur Slow! The day ended in style with moderate showers!!! Thanks!
railfanning