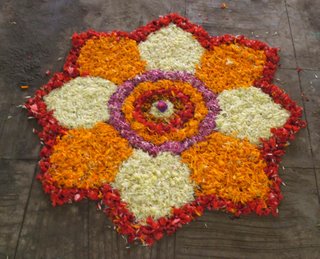 Happy Onam to all Keralites all over the world!

Malayalees, natives of the South Indian state of Kerala, celebrate Onam - a harvest festival today! Onam is celebrated over period of 13 days (14 is some places). In the malayalam month of chingam which is the first month of the Malayalam calender, after the harvesting of crops are done this festival is celebrated. There is a common saying : Atham patthinu ponnonam or "Pon-onam is on the 10th day of Atham". Atham is a birth-star commonly used by Astrologists in Kerala.
Onam has another history, which goes like: Kerala was ruled by a very honest and lovable king Mahabali. Jealous of his fame in the country, some Gods decided to throw him off power. Thus, Vamanan was born. Vamanan, dressed as a saint appeared before Mahabali and asked for "3 foot" of land. At his first foot step, the entire ocean-rivers were covered. In his second, he covered the entire land. He did not have place to keep his third step. Understanding that the saint is no ordinary person, the king bowed and asked the saint to keep his feet on the kings head. Thus the king was pushed beneath the earth to another world called Pathalam. The king had a wish that he be permitted to visit his praja or country men every year. Thus Onam is a festival when the king is permitted to visit his state!

Onam is celebrated by most households by arranging floral designs at their door steps which is reportedly to welcome the king. They enjoy the day playing games and a stumptous feast or Sadhya consisting of traditional dishes and sweets. On this day, all members of the family get together and spend time with each other!

My family couldn't celebrate today, and we have decided to celebrate tomorrow!!! Wishing a very happy Onam to my fellow country men! In addition to Onam, the country is celebrating Teachers day today!
Celebration