Back on track...after a small derailment!

on August 11, 2006
Apologies for the late update! The past week was a very busy one with hardly any time or energy left for updation of this blog! The first day of the week was a very wet one! Monday was, in short, a holiday for me! Took a days' off to "protect" myself from getting drenched up! On tuesday, the week started fresh! Tuesday was another wet day. The journey was with closed windows for the entire length in the morning! In the evening while returning, the train came to an abrupt halt after Kanjur Marg station. This is the sight that I saw later: 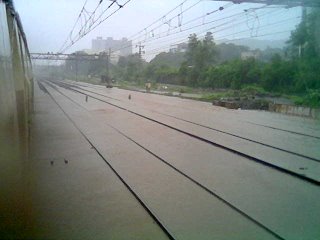 That was a bit frightening though! The train crawled through, and managed to reach Kurla (CLA) just a few minutes late. Harbour line trains were normal! Wednesday and thrusday were two dry days of this week! Wednesday was Rakshabandhan - a working day for our college! The trains and buses were packed beyond capacity on the day!
Today, Friday - 11 August 2006 was an interesting day. I travelled to and from Kurla in the same coach - #72338, albeit at different timings! The BEPR-CLA journey was at 06:33, while the return was at 17:04. In the morning, i had a few interesting crossings! My train crossed 5 Expresses in the morning of which 3 were diesel hauled!
The first one was a very late running 0112 Konkan Kanya from Madgaon - Hauled by KJM WDM3A #18546 at Ghatkopar. The next was 2620 Matsyagandha from Mangalore - hauled by Erode WDM3A #14075. The third was an unidentified express behind a WCG2! The fourth was 1036 Mysore-Dadar Sharavati Express behind WDG3A #13051 from Pune! The fifth one was Vidarbha Express from Nagpur with WCAM3 at its helm!!! Most crossings were in style!!!
In the evening (left Thane at 16:23, by Fast Local), my train crossed the Kanyakumari Express, another unidentified train, Pragati Express before making it to Kurla. Just after Vikhroli, our train was held up at a Danger signal. The signal turned to Caution and the train just crawled into Ghatkopar (GC). The train stood at GC for about 5 minutes for want of signal. The block Just ahead and Just behind were occupied by Locals! One could see the rear car of the local ahead of us, and the driving cab of the local behind us! While at GC, my train was flown over by three aircrafts - One from Jet and the remaining two from Indian. The train made it to Kurla quite late. I saw my regular 16:49 Belapur local leaving the station from the FOB!
The day was interesting. I am looking forward for another interesting day tomorrow!!!
railfanning