on August 16, 2006
Today was a day of rain...rain....and rain! It has been raining continuously since 0500 AM today. It still hasn't stopped. The rain slows down to a drizzle every 45-60 minutes and then regains momentum once gain! I was expecting water-logging at many places - and - suprisingly that did not happen :-(

Most Long-distance trains were on-time barring a handful. The day was a good one! I returned from Thane on #333A. The train really flew through stations like Mulund and Vikhroli at 100 kmph with the horns blaring almost continuously. Rain drops were landing on my hand as if there was a warfare! The run was amazing! See this image for an Idea! 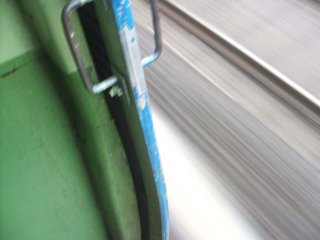 Another interesting point of the coach was that: The coach was once re-painted by WR. WR follows a 3-colour scheme for interiors of FC coaches. The lower half of the coach is painted Dark green, the middle portion is Pista Green while the upper most part is White. This is in contrast to the CR's Pista-White 2-tone livery.

While on my Kurla-Belapur leg, a TTE boarded from Sanpada. He got his victim at the door itself. A fellow in his 20s was travelling in FC with an Ordinary Second class ticket! The TTE got hold of him and got down at Juinagar. The poor soul would have either parted with a 3-Digit sum or something else like his watch or so! There is even a chance that he could have been taken to the GRP station at Vashi! I had a chill wave running down my spine - Was I carrying the correct MST? I quickly checked it, and saw it to be allright!

Signing off for the day...But before winding up: A very happy Janmashtami!
railfanning