Traveling from Kasaragod to Thrissur

Warning: This is a rant! Not a travel experience!

Ever since I moved to Kasaragod in March this year, I've been experimenting with various modes of transport to travel home. I end up having to travel to Thrissur quite often than expected - sometime for personal reasons, and at times for work. Kasaragod is located a few kilometres shy of 300, as the train runs. (People say as the crow flies, but I am more interested in trains!). Trains are off late the most preferred mode of transport - since they are faster and really economical! With the frequency of journey increasing, its important to save some money, while ensuring shorter travel time.

Back in the days when I used to work at Bangalore, I preferred taking the bus, since they were faster and tickets were easier to get. That isn't the case with Kasaragod - trains are faster, while tickets aren't so easy. Development of 6-lane highway is progressing fairly well - which would connect Kasaragod to the rest of Kerala faster. Kasaragod is the northern gateway to the state of Kerala - a district frozen in time, and a place eager to grow. Being the farthest from the state capital, which itself is located at a corner of the state, people of Kasaragod end up having to travel very often. The pathetic condition of roads, plus the terrible traffic congestion, makes trains the most preferred option for most passengers. 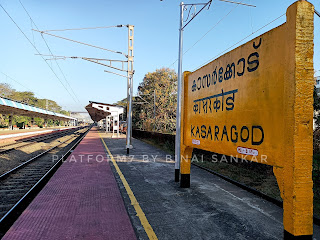 Kasaragod station is small - three platforms that can hold 24 coaches - 2 of them on the main line, and 1 platform on the loop line. Kasaragod is also home to the region's track maintenance team, and one bay line is dedicated to their machinery. Despite being a district headquarter station, it falls in the Non-Suburban Group 4 category (earning over 10 crores, but less than 20 crores, and handling over 2 million, but less than 5 million passengers annually), and is the 10th station, in terms of revenue, under Palakkad Division of Southern Railway. The station handled over 6700 passengers per day on an average, as of 2016-17 data. (Newer data is yet to be available, and the date from the last two years aren't indicative). There are a few trains that skip Kasaragod, while the Rajdhani Express does stop here.

Cutting the data, and coming straight to the point - traveling from Kasaragod to Thrissur is a nightmare. There are 27 pairs of trains between these two points - 7 of them operate daily! At a single glance, things all seem fine. Of the seven daily trains, 4 operate during the day, and the remaining 3 are "overnighters". None of them are technically "overnight" trains to Thrissur. Two of the "night" trains depart before 8pm and reach Thrissur around midnight. The only "overnight" train departs a little past midnight from Kasaragod, and reaches Thrissur early in the morning. Thus, I either need to start my journey by afternoon, or wait until midnight to travel. All the other options either cause a loss of working day, or necessitates hiring another vehicle for last mile connectivity.

The case in point here is travel to Thrissur. The state's largest city, Kochi, is located only a little over an hour away from Thrissur. Connectivity to Ernakulam is no better. Travellers from Kasaragod towards Ernakulam either need to lose a day traveling, or travel at odd hours to get there. Trains are timed such that they either serve local office goers, which isn't the purpose of operating express trains, or are timed to ensure convenient arrival time at Trivandrum, at the behest of politicians who travel frequently. There used to be a convenient overnight train from Mangalore to Ernakulam a couple of decades ago, which was 'killed' to make it convenient to the capital passengers.

Things are no better in the opposite direction. Things are actually worse there. Of the 7 daily trains, only ONE has a "somewhat better" timings - departs past midnight and gets into Kasaragod early enough to head to work. The others have pathetic timings! And, there also exists a huge gap - there are no trains after Netravati Express (14:50hrs from Thrissur) until the 6-days a week mixture of trains departing at 2004hrs. Practically, people who have a "Day work" around Thrissur or Ernakulam, end up having to spend time till late night to travel back.

While all this isn't enough, ticket availability on whatever trains run aren't good either. Thrissur comes under Pooled Quota for most of the overnighters, and ticket availability is scarce. Travel to and back from Thrissur is always a trouble. I end up traveling in different trains every single time, trying to find the best option that could be economical and convenient. While the Railways cannot run trains that are convenient to every one, the talk here is the lack of a proper overnight connection between Mangalore (one of the biggest cities along the western coast) and Ernakulam (another major city along the coast, and also the biggest city in Kerala).

The local politicians aren't interested - since it might not benefit them. The railways always have a dozen reasons to state to avoid operate more trains - the most important among them, which they never openly admit, is the laziness to do work!

Sorry for this post that isn't revealing much, and isn't touching too many points either. I was just frustrated as I looked for tickets for future travel!

Voodoo Blaster said…
For the time being , you will have to depend on KaSRTC for AC Volvo at convenient timings:

However the KaSRTC buses from Thrissur to Kasaragod can't be realistically expected to keep the advertised departure timings at Thrissur, since they start from Ernakulam/Pala/KTYM/TVC. The worst buses in terms of punctuality would the ones that start from Trivandrum

However a significant no of Pvt Busses start from Kanhangad (although it entails an additional 25kms journey from Kasaragod towards south)
15 September 2022 at 19:48:00 GMT+5:30

rahulvijayev said…
Very relevant post. Agree to every point in this.
But with the local politics & wave in actions in recent years, getting any new Kerala bound service from MAQ would be really challenging, isnt it?
19 September 2022 at 09:01:00 GMT+5:30

Binai K Sankar said…
Not everybody can travel by bus - and except the Airavat, the others do not even provide basic comfort. And I had to travel by bus, I'd rather take a bus directly to my hometown than traveling to Thrissur. The intention of the post is very clear, and I think I've been able to articulate it as well.
19 September 2022 at 15:34:00 GMT+5:30

Vineeth said…
When I used to work in Mangalore, I used to travel by bus from Kanhangad, just for te sake of travel in bus. Madhavi and Arya travels, both from Kanhangad offer very well maintained sleeper buses and are excellent choices. There's also UBC Kasargod Kottayam semi sleeper.
20 September 2022 at 20:17:00 GMT+5:30

Voodoo Blaster said…
At the outset, i concur with the view that busses are not for all. Comparatively trains are cheaper, faster and more comfortable

I mentioned buses since your are a bus fan, and we are bigger fans of your bus reviews. Your bus trips from Bangalore (to North Ktaka, Maharashtra and Tamilnadu) are personal favourites.

The rant in your main post is being made my the people of Kasaragod for decades and falling on deaf ears. It's almost as if Govt thinks that Kerala has ended with Kannur

Permanent solution to the train problem faced by Kasaragod DT is to develop some kind of coach maintanence and repair in Kasaragod DT. Also RO-RO facility should be developed. If that happens at the very least the Intercity/Executive, and the unreserved passenger trains based out of Kannur could be extended to Kasaragod. Having such trains with suitable for local short distance commuters will also ease the pressure on Mangala SF and Netravati which run similar to passenger trains in the Kasaragod Calicut segment

Depending on MAQ and MAJN for North Kerala Railway aspirations may not be always feasible as there are demands to merge MAQ and MAJN with SWR
(https://www.thehindu.com/news/cities/Mangalore/mangaluru-under-swr-could-push-regions-economic-development-kcci/article33293820.ece)
27 September 2022 at 08:30:00 GMT+5:30

Binai K Sankar said…
Demand to construct a coaching depot at Kumbla was raised by the MP - was set aside by the railways saying there are no trains terminating at Kasaragod, and hence the facility was not needed at the moment. In the same meeting, a request for extension of the ALLP/ERS-CAN Intercity to KGQ was also rejected saying there is no terminal facility at KGQ. Both the talks happened in the same meeting. With Automatic Signalling being implemented, and upgradation of speeds, this section surely can handle more trains - but the political will is missing.
27 September 2022 at 09:34:00 GMT+5:30