on June 29, 2008
A railfanning trip with other IRFCAns in Bangalore was on the cards since a very very long time. It never materialized since every one pulled out at the last moment. Finally, it happened - a meet organized at a really short notice! We were to meet at Krishnarajapuram station at 1100. I and Jacob (Another IRFCAn, staying close to my home) were to meet up at the bus stop at 1000. But a Saturday morning fever struck me, and I left my home well past 1020! We met up at the bus stop and took a bus to Jayadeva Hospital. We headed off to the Jayanagar 9th block bus stop. We missed a bus just as we were nearing the stop. WE stood there for a long time, but no buses turned up!

We then toon another bus to Silk Board, and then changed on to a bus on Route #500D. The journey took 30 minutes, and the bus driver was driving way too slow! He was really competing with pedestrians, and even rickshaws could overtake the bus! We reached Krishnarajapuram station well past 1200! We were now joined by Abrar and Sanket! After a standard round of introductions, we started off walking towards the loco shed!

While we were walking, the Chennai-Bangalore Brindavan came in with WAP4 #22558 of Erode. We continued our walk towards a small halt platform built on the main line for employees of the loco shed. On our way, another IRFCAn Vibin called up and he asked our exact location. He drove towards our point, and on the way messaged us that the Marikuppam Push Pull was on the way! 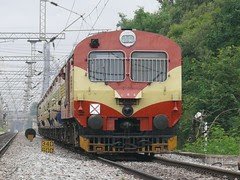 The Push Pull is basically a DEMU, and had 7 coaches including two power cars! After the DEMU left, we spotted a twin Vijayawada WAG5 hauled tanker rake rushing off towards Chennasandra. Vibin reached us by now. There was no traffic at all for very long periods! A Kalyan WDG3A (#14982) rushed towards Whitefield - probably to pick up her rake - after a long 40 minutes of silence! Just a while after the Kalyan loco rushed, the Bangalore MEMU from Bangarpet arrived. There was enough crowd in the train.

The Sheshadri Express to Kakinada rushed past about 3 minutes after the MEMU went. Vijayawada WAM4 #21218 did the honors of this train. That was my first proper sighting of a BZA WAM4! Traffic was dismal in the section, and it rained intermittently - pretty heavily on some occasions! Another tanker train went towards Chennasandra a while later with twin WAG5s of Vijayawada doing the honors again! We were joined by Colin Peter now (Sanket left us soon after Vibin joined due to his personal commitments!). WE decided to wait till the Brindavan heads to Chennai before we doing something that we all had been waiting for!

The Brindavan went through at 1502 hrs. Erode WAP4 #22550 did the honors! We then headed off to the DLS for a guided tour around, and then went home! I did not take much images, but the ones I took would be put up soon (I still have space issues at my image host - will probably solve them this week!).....
railfanning

No other railway in the world will provide an experience as enchanting as Indian Railway! I loved the trains, and I miss'em a lot...