The First Time: A Visa interview!

I was busy searching my passport at home - I remember I had taken it last to a travel agency to enquire about the procedure for an address change. The cute blue booklet was missing - I was anxious. I searched everywhere it could have been to - couldn't find it anywhere! Finally, I head to the police station to find out the procedure to file for a duplicate passport. The Civil Police Officer at the police station threw me a question, that still rings in my ears - "Have you never been to 'Gelf'?" (Gelf = Gulf = the Middle east).

Yes! Being a malayalee that too from the 'Gelf' belt in Thrissur district, its impossible to find someone who hasn't been to 'Gelf' (Pun, obviously, intended!) - I am one of those few who hasn't ever traveled to the 'Gelf'. My passport didn't have a single visa on it!

The Police officer explained the procedure to get a duplicate passport - I did that, and finally the passport application reached the Regional passport office in Kochi (there were no Passport Seva Kendras back then). The same question from the passport officer - "Have you never been to 'Gelf'?". In complete disbelief as I replied that I've never been out of the country, she checked her system with my passport number, and found that I was right. Her look of disbelief was exciting! She processed my application, and put it on for police verification. The Police officer who processed my form had the same question - "Have you never been to 'Gelf'?". I repeat my reply. This time, he was curious to understand that I had no relatives in the Gelf.

When my new passport arrived, I was now determined to get at least one 'red' immigration seal on my passport. Years went on. My wait for the 'red' seal continued. I got close to one as I applied for a paper presentation at a conference in the middle east, but that didn't happen due to various reasons. Year went on, further. It was only in early 2017 that I got a real chance to get that 'red' seal on my passport. An email from the Fédération Internationale Pharmaceutique (FIP, or International Pharmaceutical Federation) informing that I was selected for a faculty exchange program, to the United States of America!

That was exciting! The first visa on my passport would be from the Big Brother! The Visa application is a long drawn procedure. The online visa application is long, and there were a lot of questions - I had too read them carefully and answer them very carefully. The first trouble came up when I found that the 'Surname' field was mandatory - I didn't have one! I overcame the trouble by putting a part of my name there - I had to change and resubmit my form later, though. The form took close to an hour to complete - it did allow me to save it and resume later though. Since the photograph for the visa is taken by the processing agency, I didn't have to upload one. At the end of the form, I had to book an appointment and pay for the visa. For a US visa application, one needs to book two appointments - one for the photograph and biometric, and the second for a personal interview with the consular officer. You need to report to the OFC (Offsite Facilitation Centre) first to get yourself photographed and biometrics recorded, followed by a visit to the Consulate for interview, where they decide on the application. 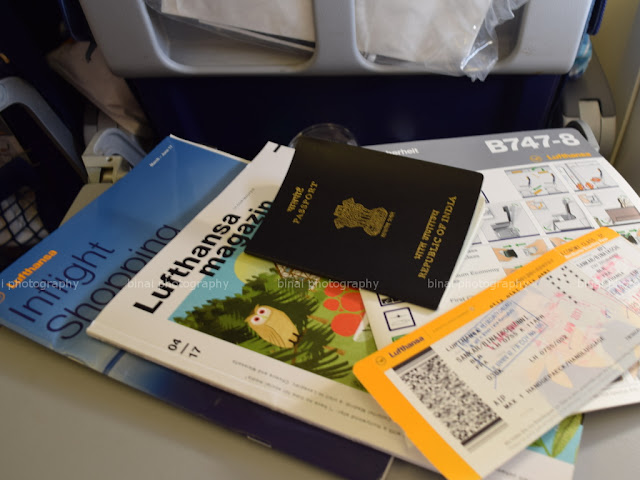 I didn't know this, and selected a random appointment for the biometric - and found there was no appointment for the personal interview close by. Which would mean I would have to go to Chennai twice (The nearest US consulate for Bengaluru, is at Chennai). After a bit of picking and choosing, I finally found appointments close by - the personal interview the day right after biometric (it didn't let me have both on the same day). I took an early morning bus from Bengaluru to Chennai (read here), and checked in to a hotel in Mylapore (I wanted to stay as close as possible to the US Consulate, so that I could be at ease with traveling).

The instructions given with the application clearly mentioned that I shouldn't carry any electronic gadgets with me - so no mobile phone on me. I don't wear a watch (left wearing one as I realised I was obsessed with looking at the watch every now-and-then) and hence keeping a track on my time was difficult. I headed to the OFC run by VFS Global - the processed photographs and biometric collection for the US Consulate. My application was rejected at the screening point - they wanted a 'Surname' - when I said, I didn't have one, the agent suggested me to use "FNU" in the Given name, and insert my entire name as 'Surname'. There was a cyber cafe located in the basement of the building - this office was busy processing plenty of such 'rejected' applications - I wasn't carrying much money with me, since I had left everything behind at the hotel room. I returned to the VFS office with a new application form - I was allowed in. The application was screened again at a different desk, before being sent to a counter for photograph. This was followed by recording of my biometrics. They verify all documents at this office and make sure I am eligible for the type of application I have applied for. My application was categorised as "Sensitive but unclassified" - there was risk of immigration due to my profession.

The next morning, I head to the US Consulate. The US Consulate is a fortress in its own right - the building is fenced quite tall, and has multiple layers of security. Police cops verify and ensure that you are either an applicant, or are accompanying an applicant - if you don't belong to either of this category, they do not allow you to remain in the area. The verify your time slot as you enter the queue as well. You undergo an airport styled security check at the main gate of the consulate - all documents should be carried in a clear bag. The bag is scanned, and you pass through a door-frame-metal-detector. You are then frisked and allowed in to the consulate. The documents are verified at a counter before you join a queue to meet the consular officer. At this point, options are given if you require a translator.

The waiting area was crowded - most of the applicants were aged-parents traveling to the US to be with their children. The second largest population of applicants were IT/ITES employees. My heartbeat kept increasing as my turn came closer and closer. Finally, my number was called and I move to the officer. He asks a few questions to confirm my identity, verifies my passport and cross-matches with my application. He reads about my purpose of visit and my profession from my application form - he was interested to know my reason for visit. I explain. He needed some clarification, and asked for a documents that could support my visit - I give him print outs of the confirmation letter from the host institute in the US. He verifies. He is seen typing fast on the computer. My heart beat rises further. He finally smiles and informs me that I have been granted a visa - and adds that I would receive an update once the Visa is printed and I could collect the passport from the pick-up location I had chosen!

Relieved! I collected my passport from the Document Collection centre in Bengaluru a week or so later - and was really excited seeing a long term multiple entry visa stamped in!

The first Visa interview was a confusing, exciting and clueless at the same time! There was very little information about how do we go about applying a US visa on the internet at that time - I am not sure if it got any better now. The happiness and relief you have when the consular officer says "Accepted" is beyond words. Its even more exciting when you get that red immigration seal on the passport - the seal that reads "EXIT"!