on October 26, 2010
Kerala is known as a hot-bed of politics - with almost every single citizen interested in the daily political drama. Kerala has two major political fronts - left and the "right". The left, "Left Democratic Front", is led mainly by the Communist Parties, while the "right", "United Democratic Front" is led by the Congress (Kerala Pradesh Congress Committee). In addition to the two fronts, the national party, Bharatiya Janata Party, too has been unsuccessfully trying to make a dent. In a state that is so interested in politics, the state assembly elections usually work on an anti-incumbent wave - the ruling party has to move to opposition irrespective of their performance.

In what could be termed a curtain raiser to the State Assembly elections, the state went to polls, to elect new Local Self-Governments. Perhaps, ours is the only state where almost all the Panchayats/Municipalities/Corporations go to polls together - giving a feel of a full fledged state elections. The state has been under the Model Code of Conduct for more than a month now. The state went to the Ballot in two phases - the first on 23rd of this month, and the second yesterday (25th October). The state recorded very low voter turnout last time - just in the range of 50-odd percentage. 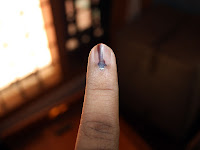 This was my first ever franchise - although its been 6 years since I became eligible, and have gone through about 4 elections since then (in various places), I haven't been able to vote anywhere. It was a pretty excited start to the day. The polling station is the next compound to my home, and just walked in around 9 AM. There was a very small queue, and the entire waiting period was less than 10 minutes. The new voting machine has made matters very simple for both the voter and the counting officials! The franchise is just a beep away!

This time around, my home town tops in voter-turnout in the District - Kodungallur recorded 80% voter turnout, the highest in Thrissur district, which managed an overall turnout of 73% (Compared to only 58.76% in 2005). Is this high turnout a sign of change? Will the normal trend of voting out the incumbent change? The Local bodies in Kerala has been doing a horrible job with road maintenance - making driving a nightmare anywhere in the state. Take the case of Kochi - a city often called the busiest and the most happening city in the State: Kochi has the most non-motorable roads in the state. Rain or no-rain, one should be ready to drive avoiding all the "ponds" in the road. See this one:

That bus is not going for a bath, but one falling into a trap! The pothole - er! Pond! - is right opposite the office of the Corporation of Cochin. Will Kochi vote for a change this time? The current front has been ruling for over 25 years now, and they have only taken the city downwards - no solution has been found till date for the umpteen problems city residents face! Newer craters appear each day on the road - so much that a famous FM radio station holds "Miss Kochi" contests to find out the most beautiful crater on road! The traffic chaos sees no end - traveling a kilometre takes more than 10 minutes even during the worst non-peak hour!

I have only one question: Does this higher voter turnout signify a change? Will the current trend change?
Others