It had been almost a year since my last journey to Bengaluru - and TD had never been there! After a lot of planning and replanning, we finally decided to travel to Bengaluru for my niece's birthday celebration. The journey was to be by train. Booking the return journey was easy (more on that later) - the outbound was difficult. I had 3 choices - the AC super fast, the Island express and the Kochuveli-Mysuru express. The Garib Rath Express was not being considered since the berths were slightly narrower, and it would be tight for TW and TD to adjust on to one. Of the three trains in the shortlist, the first one was eliminated due to two reasons - one: an early departure, and an equally early departure (Bengaluru's cold weather would be a challenge for TD); two: the train terminates at Yeshwantpur, and my final location is in South Bengaluru. Two trains were in the shortlist now - I picked the Mysuru Express, since this would be last departure of the day, making it convenient for me and TW.

I had left office earlier - TD wasn't really keeping well, and we were unsure if we would be able to travel. TW and I had taken an RT-PCR test the previous day - and they were negative as well. We had planned to start early - but packing took a while, and we left home almost an hour behind plan! It was almost 2000hrs by the time we walked out of home - thankfully, we managed to get a bus very quickly. TD was kinda better now - she was all excited about traveling to Bengaluru. We reached Thrissur a little past 2100hrs - and interestingly, most restaurants were already shutting down by now. We managed to find a restaurant to finish dinner. We were at the railway station by around 2130hrs.

It was a Friday evening, and the station was crowded. Soon after we entered the station, the Mangalore-Trivandrum express arrived at the station. As usual, our coach was to arrive at the front end of the train, and this meant we had to lug our bags through the foot-over-bridge. The station seemed quite busy at this time - by now the Veraval-Trivandrum Express arrived at Thrissur. This was followed by the Ernakulam-Guruvayur "Passenger Express" (as announced at the station), and then the Ernakulam-Okha Express. The Ernakulam-Okha express was also carrying a dead WDM3A along with it. 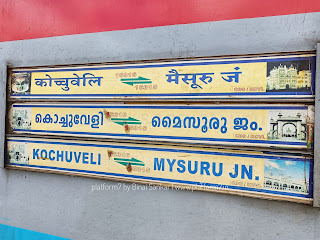 My train was a little behind schedule - and arrived only by 2215hrs (about 8 minutes behind schedule). As usual, the coach didn't come at the place it was supposed to - the coach came about 2 places behind. People panicked and ran helter skelter on the platform. We too had to run a bit to get into the coach. The Kochuveli-Mysuru express runs with an LHB rake based at Kochuveli. My coach, B2, was a 2018, Integral Coach Factory (ICF) Chennai built AC 3-Tier coach (LWACCN 181273, built in August 2018). The coach didn't appear well maintained at the first look.

We departed from Thrissur at 2218hrs - 8 minutes behind schedule. Most passengers in the coach had already slept by then - it was dark in the coach. We settled down quickly and got set to sleep. With the railways not providing bedroll, it is quite a hassle carrying sufficient bedding. The lack of curtains are another hassle - the LHB coaches have large windows and its quite difficult at night. The coach wasn't very clean - the toilets were stinking (the flush was damaged) and the door locks weren't working either. It was quite an unpleasant express. I slept soon after departure from Thrissur - I vaguely remember seeing Coimbatore station, though.

I had a nice long sleep - waking up only as the train pulled in to Bangarapet station (0642hrs). I was a little sleepy and didn't out of berth until we reached Whitefield. The coach began emptying as the train reached Whitefield (0716hrs). There was a constant movement of people in-and-out of the coach. A few vendors also appeared by now - mostly selling tea, and breakfast (Idli-Vada). We got to Krishnarajapuram station by 0728hrs. The stop here was getting a little long. I believe we were held at Krishnarajapuram to allow the Mumbai-Bengaluru Udyan Express to join the mainline at Baiyyappanahalli. We started from Krishnarajapuram at 0733hrs - we crossed the Bangarpet bound MEMU here.

The train crawled from Krishnarajapuram to Baiyyappanahalli - and made a minute long halt there. We were on the mainline though - a stop on the platform line might have helped a few people. The halt was short anyway. This halt kinda supports my presumption that they had probably sent the Udyan Express ahead of us. We had another unscheduled halt at Bangalore East, before getting to our next scheduled stop - at Bengaluru Cantonment (0758hrs). We spend about 5 minutes here - providing further credence to my theory of the Udyan Express running ahead of us. We left Cantonment only at 0803hrs - and then slowly crawled towards KSR Bengaluru. We crossed an unknown express on the way (I think that was the Bengaluru-Tirupati Express).

We stopped at the home signal for want of clearance. Meanwhile a freighter (BCNA) led by a Krishnarajapuram WAG9 went past us - I assume this train might have come in from the Mysuru side and might have been routed to the platform that we had to occupy. This halt was a few minutes long - and we were finally allowed to enter Bengaluru station at 0828hrs - 2 minutes ahead of schedule. This was the first time I travelled in to Bengaluru on 16316 express - this train was a no-no during the days I worked in Bengaluru, due to its late arrival.

The Kochuveli-Mysore express is a great option if you could afford going to office late, or if you start work at noon, or if you are traveling to Bengaluru for reasons other than work. The train was in a pathetic shape, though - the coach was only a little over 3 years old - but the maintenance and "upkeep" made it resemble atleast a decade old coach. The toilets had non-functional flush switches, doors that wouldn't lock from outside, and the coach didn't have a dustbin! It was a disappointing experience on this train.

Do watch my video from this journey on YouTube!

Voodoo Blaster said…
How is the occupancy from Bangalore to Mysore ?

Are there passengers from Kerala to mysore ?

Binai K Sankar said…
It's purely a Kerala to Bangalore train. The train is sent to Mysore due to platform constraints at Bengaluru. The timings of the train makes it useless for office goers as well.
22 March 2022 at 10:30:00 GMT+5:30