This was one journey that went through rounds and rounds of planning and replanning. It was originally supposed to be from Trivandrum to Ernakulam - I kept it simple by selecting the Jan Shatabdi. But, then, I wanted some change and decided to try the Chennai mail (the famed No. 20 Madras Mail) instead. Due to some uncertainties around me at the time, I held on without ticketing. I briefly considered taking a bus that would drop me straight at my home town - but I was a little jittery about this long a bus ride (I am considering myself too old for that, these days). As the journey came closer, and I planned for a longer solo ride following this journey, family circumstances changed and I ended up dropping my better half and my junior at my in-laws'. So this journey was now to be changed as Trivandrum-Palakkad. This narrowed down my options - and things got a little difficult since I was traveling on a Sunday! Most trains were waitlisted - and I am always afraid of waiting lists!

I briefly considered staying overnight for a night more at Trivandurm and taking an early morning train to Shoranur. A new option came up when I looked at trains to Shoranur instead of Palakkad - that was the 01214 Kochuveli-Lokmanya Tilak Terminus bi-weekly super fast express. A quick look at the availability, and bingo! It was plenty of vacant seats in AC 3-Tier! I quickly looked for details about this train, and I realised that this was a crack train - got an LHB rake, and gets diesel locomotives throughout the journey. What more can a railfan ask for? I wasted no time in booking a ticket - but wait! IRCTC throws up a tantrum and says I could book only 6 tickets in a month, and I had already exhausted my quota. But, wait - I had "linked" my profile to my Aadhar ID and had also verified my identity proof. It then turns out that there was a spelling mismatch between my names saved in my account - I got this corrected, and bingo! My ticket pops up!

I had a small problem here - I had to check out of my room by 9pm, but my train leaves only past midnight! I looked at options I had - and decided to check out of my room, and then head to a restaurant to have a leisurely dinner. I had to thrash this idea after reaching Trivandrum - I found hotels to close early, and the city seemed to sleep quite early as well. To add to this, it might be really difficult to find transportation to reach the godforsaken Kochuveli terminus, located about 10 kilometres from the core city area. I was staying at a government rest house not too far from Trivandrum Central station as well. The guest house agreed to let me use the room for some more time - I decided to finish my dinner a little early and then check out a little late. Finally, I hired an Uber to head to Kochuveli - I found cab availability to be very poor, and most drivers weren't accepting rides either. I finally found a cabbie who dropped me at Kochuveli around 10pm - about two-and-a-half hour ahead of my train's scheduled departure! Kochuveli is a time-wrapped station. It is exactly how it was about 2 decades ago when it was commissioned. No lights, and absolutely no amenities. The railways talks of platform constraints at Trivandrum central on one hand, and takes absolutely no interest in developing Kochuveli on the other hand.

I had too much of time in hand as I reached Kochuveli. Although the train was already berthed on Platform 1 (the train has a "platform turn-around" - basically, the incoming trains arrives, may get cleaned, and departs back to the origin. Maintenance happens at the origin), the AC coaches weren't open. Housekeeping staff were busy cleaning the coaches. I remained on the platform until about an hour before departure - a lone food outlet catered to scores of passengers waiting on the platform. I headed out to see our locomotive soon after I heard them returning from Trivandrum Central (I believe they had been there to fill their tummies). It was a super exciting moment as I realised my train was to be worked by twin WDM3Ds! The locos were WDM3D #11390 and #11242 of Kalyan. Interestingly, 11242 was the first WDM3D to be allotted to Kalyan and that was the last loco I had spotted before shifting out from Panvel to Bangalore, back in 2008! An emotional moment there!

The AC was turned on a little past midnight - people had already occupied their berths, and even managed to sleep despite the heat inside. The coach wasn't very crowded - plenty of berths were vacant at that point. I was on board a brand new coach - a July 2021 built coach. It was built by Rail Coach Factory, Kapurthala - this was a ride in an RCF built coach after a very long time as well. The interiors were still factory fresh - very clean and very well kept as well. We departed perfectly on time - at 0035hrs. The TTE came around soon after the train got moving. I hit the berth soon after the TTE finished checking my ticket. The lack of curtains and bed roll set is a bummer - the LHB coaches have big windows that offer unrestricted entry for all the light from platforms. I had carried an air pillow and a bed sheet - that helped me have a great sleep. 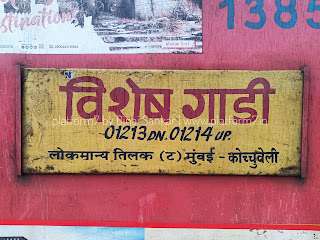 It was such a nice sleep that I didn't realise any stops en route. I woke up just as the train was departing from Thrissur - this, because, the other occupants of the bay alighted at Thrissur and a fresh set of passengers boarded from there. And like all new occupants, they made a lot of noise, sufficient enough to wake me up! As the train slowly moved out of Thrissur, I noticed the Punalur bound intercity express on the adjoining platform. Soon after waking up, I got fresh and decided to head towards the front end of the train - my coach was at the rear end of the rake. I badly wanted to see the locomotives in day light! 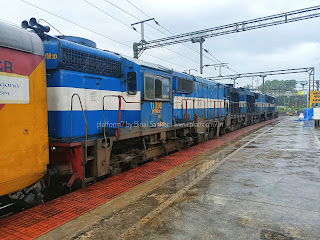 It was a long walk from my coach at the rear end towards the front end of the train. I had started walking only after we passed Wadakkanchery - by the time I almost reached the front end of the train, we had already passed Vallathol nagar, and entered the Bharathapuzha bridge. Like all my train journeys in the recent past, we pulled in to Shoranur well ahead of schedule - about 12 minutes ahead of schedule (0658hrs against the schedule time of 0710hrs). It began raining soon after my train reached Shoranur - I had to hold on for a while before I could go an see the locos. It was still drizzling, but I had to head to the front and see the loco before it departed on its long journey to Mumbai!

Do watch the video from this trip here:

This was a fabulous journey! A brand new LHB coach, diesel locomotives - that too twin WDM3Ds! They were all just cherries on the icing - it was a pity that the good part of the journey was under darkness - I'd have loved if it was during the day, though! Its an amazing option to travel out of Trivandrum - except the trouble getting to Kochuveli.

Tail note: I was planning to take a bus from Shoranur to Ottapalam, and then changing over to another one to head to my in-laws'. No buses to Ottapalam came even after a long halt - and when one came, that was a one that dropped me very close to my in-laws' place!

rahulvijayev said…
Didnt you get the temptation to carry on your travel all the way to Panvel or even LTT (considering the fact that you had spent your many years in Mumbai and I always feel the same when I board any Mumbai bound train and get down at Kannur) :)
18 January 2022 at 19:16:00 GMT+5:30

Voodoo Blaster said…
This is one train that provides guaranteed seats (till calicut/kannur at least) on a sunday night (read monday very early morning) owing to its originating station
26 January 2022 at 01:35:00 GMT+5:30