The original plan was to travel by an early morning train - however, the options weren't too comforting. The sole train that had relevant timings had no vacant berths, and I did not want to risk traveling on a waitlisted ticket, especially since we were traveling with a kid. After a lot of considerations, we finally zeroed in on the Mangalore-Nagercoil Ernad "Special" Express. Ernad had a slightly later departure - so we'd get decent sleep. I was a little concerned about the long distance in a sitting coach with a kid - she was fine on the outbound, though.

None of us were in the mood to travel that day - I was visiting my cousin after a very long time. My kid had a lovely time there playing with my cousin's kids - neither was my kid happy, nor were my nieces about our quick return. It was a very early start to this day as well. I had planned to buy lunch on the way - but the schedule of the train meant finding food would be really difficult. The train passes Kozhikode before lunch time, and it would be quite late by the time it gets to Shoranur. My aunt, who is a regular traveler on the route, had understood my predicament quite early on - our lunch was prepared and packed!

My cousin drove us to the railway station - a few kilometers away from their place. We were at the station by around 0745 or so - a little over 15 minutes before departure of our train. The station was crowded - all the people on Platform 1, and it appeared like all of them were to travel by Ernad Express. It was quite hot and sultry out there - I badly wanted the train to come in so that we could sit in the cool comfort of the AC Chair Car coach. The train, 06605 Mangaluru Central - Nagercoil Junction Ernad 'Special' Express, pulled in at 0807hrs with WAP7 #30394 of Erode in charge. Our coach, C1, was the sole AC coach in the train - the coach was a 2009 Integral Coach Factory built one (WGSCZAC 09152) based at Mangalore Central. 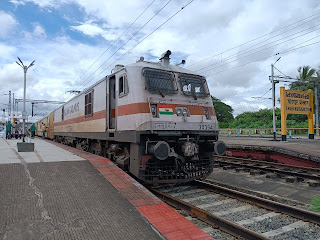 Interestingly, we had traveled by the same rake the previous day - this train (Ernad Express) and the Intercity Express share rakes. We settled in our seats very quickly - while the train had already started its journey from Kasaragod (0809hrs - about 4 minutes behind schedule). The coach was almost full as it departed from Kasaragod. The system of current reservation has increased the utilization of AC coaches in intercity train - earlier, plenty of seats used to go vacant, or had to be manually upgraded by the travelling ticket examiners (TTEs) on board by collection of difference in fare - this was a biased system since it was not based on a first-come-first-served basis. Now, the reservation system ensures equal chances - its time the railways upgraded their reservation system to allow live reporting of vacancy and current reservation with digital reservation charts to minimize paper usage. It would be far cheaper to provide hand-held devices to TTEs so that reservation status is updated on the go, vacancies are reported in real-time and even upgradations are transparent.

We got busy with the kid as the train swiftly picked pace as it headed to the southern part of Kerala/Tamil Nadu. Ernad has plenty of stops in Northern Malabar, and is more of a "fast passenger" train in this part of the state. This train even stops at places the Intercity express skipped the previous day. I remained indoors for most part of the journey - reaching out to the door only as we stopped at Valapattanam. Valapattanam is a freight loading point on the outskirts of Kannur - the station is located along the banks of Valapattanam river. In the past, during my innumerable trips from Mumbai via Konkan Railway, our train used to stop at Valapattanam almost regularly for crossing. Ernad express had a scheduled halt at Valapattanam - interestingly, the station didn't even have a proper platform that could fit the train! We started off from Valapattanam at 0920hrs - perfectly on schedule. 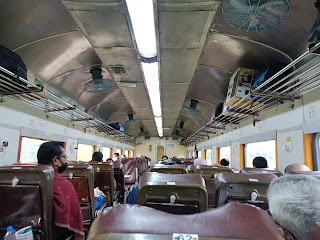 We made a very quick jaunt to Kannur, reaching there by 0927hrs (5 minutes ahead of schedule). Ernad Express doesn't have a pantry car or even onboard catering service - and to make matters worse, the vestibule connecting the coach to the rest of the rake was also in locked condition. This ensured that no vendors boarded the coach and we had to buy things when the train stopped at stations - the early arrival at Kannur gave enough time to buy some snacks and some hot beverages. The station was quite crowded - the adjoining platform had the rake of Kannur-Yeshwantpur express, while the rake of the Kannur-Ernakulam Intercity was parked in yard. We started off from Kannur at 0935hrs - perfectly on time.

Day journeys can be really boring with the absence of food vendors - even if you do not buy everything that comes, the constant "chai.. coffee.." calls can itself be an entertainment. Ernad keeps making frequent halts to add some spice to the journey, though. With completion of doubling and electrification, quite a lot of trains in the malabar region began running faster - Ernad seemed to have benefited as well. We were before time at most stations on the way - we got to Thalassery by 0950hrs - early by 4 minutes. We departed at 0955hrs - on schedule. The next halt was at Mahe - where we reached by 1004hrs. We crossed the Coimbatore-Mangalore Intercity express here. We departed a little behind schedule - at 1007hrs - about 2 minutes behind schedule. 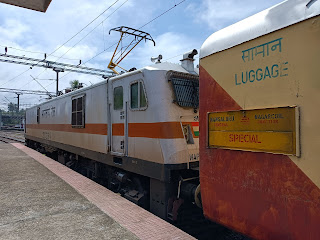 The rest of the ride was eventless - the train kept making stops frequently - at Vadakara, Payyoli (I think this is the only express to stop there - Payyoli is famous after the legendary athlete, PT Usha, who is often referred to as "Payyoli Express". I love Payyoli for another reason - the famous "Payyoli Mixture" - a savory found in bakeries) and then at Quilandy. I was desperately waiting to reach Kozhikode - with the hope of finding some snacks to munch on. We got to Kozhikode by 1100hrs - ahead of schedule by 7 minutes. Sadly, nothing interesting popped up at Kozhikode. Its really high time the railways restored onboard catering for all intercity trains - addition of dining cars should be considered in such trains as well. We departed from Kozhikode at 1110hrs - perfectly on schedule.

We kept crossing trains very frequently - I couldn't note down any of the details though. The number of trains we crossed increased after Kozhikode. This train had plenty of stops after Kozhikode as well - we stopped at Feroke, Vallikkunnu, Parappanangadi, Tanur, Tirur, Kuttipuram and Pattambi before getting to Shoranur - Ernad actually skipped only 7 stations between Kozhikode and Shoranur! We crossed two trains at Tirur - the Coimbatore-Mangalore Express (former Fast Passenger) and the Kozhikode bound Jan Shatabdi Express. We made a brief halt outside Shoranur, during which we also crossed the Nizamuddin bound Mangala Lakshadweep Express special (which was running to Monsoon schedule then). We made it to Shoranur by 1310hrs (15 minutes ahead of schedule). 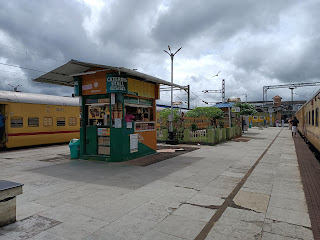 We had finished our lunch by then - thanks to my aunt for packing our food - we'd have struggled to get lunch otherwise. My kid was fast asleep by now, as well. While at Shoranur, we crossed the Mangalore bound Parasuram Express as well. Interestingly, although we were before time at Shoranur, they did not allow our departure until the Sabari Express to Secundrabad was received. This delayed our departure from Shoranur, and we started only by 1346hrs (16 minutes behind schedule now). Ernad express has a non-stop run from Shoranur to Thrissur (Very surprising, since this train stops almost everywhere between Kasaragod and Shoranur). We finally made it to Thrissur by 1428hrs - 5 minutes ahead of schedule!

And, do watch the video!

Ratings:
Punctuality: 10/10 (On time at either ends or negligible delays)
Cleanliness: 10/10 (Absolutely clean)
Bedroll: Not Available.
Catering: Not applicable

I absolutely loved this one. However, I felt the lack of catering to be very troublesome. The train has very short halts - people traveling alone, especially the elderly, could find it really difficult to find food. Introduction of onboard catering is essential for intercity trains - eCatering isn't an option though. The food is overpriced, plus the availability is really poor.

rahulvijayev said…
I remember boarding TVC bound Malabar Express from Valapattanam in the late 2000s and the last 2 coaches used to be out of the platform. But I was in the notion that it was extended and the height was increased few years back.
22 December 2021 at 15:37:00 GMT+5:30