Traveling to Northern Kerala doesn't happen every day. Since, we were traveling after a long time, we decided to pay a visit to our relatives at Kasaragod as well. We had to travel 62 kilometres from our family temple to Kasaragod. Buses were ruled out for two reasons - availability of buses and availability of seats. A lot of buses aren't running these days since passengers are returning to public transportation very slowly, and the increasing prices of fuel. I looked a trains to travel from Payyanur to Kasaragod, and found the Coimbatore-Mangalore Intercity express very convenient. There was a train before this one - but that one was cutting a little tight for us. The Intercity express would mean a longish wait at the railway station - but my family considers that a better option over having to run for a train.

I picked up Second class chair car - the distance was too short to opt for AC Chair Car. And this would also be an opportunity for my kid to travel in second sitting. I tried booking a train ticket through Amazon - the experience was easy and simple, with no added charges. The e-ticket email popped up soon after the Amazon app displayed my ticket confirmation.

It was an early start to the day - it rained a bit as well. The temple visit went well, and my cousin dropped us at the railway station well before the train was to depart. Payyanur is not a major station - it acts as a railhead to a major Indian Navy facility though. The station had 3 platforms - two of them on the main line, and one on the loop line. The Mangalore-Coimbatore Express (06324) arrived soon after we reached the station - this train was once a fast passenger, recently upgraded to express (with mostly, all the stops retained). This train was hauled by a WAP1, and had a dead WDP4 behind - quite a lot of trains lug dead WDP4s in this stretch - these locos are hauled dead to Mangalore, to work trains on Konkan Railway. 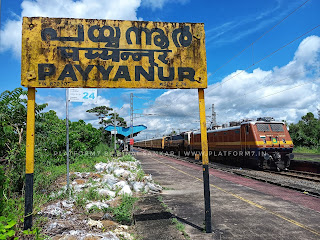 This train was overtaken another Coimbatore bound express (I think that was the Jabalpur-Coimbatore Express) - most interestingly, they had received the slower train on the main line platform, and made the faster train crawl through the loop line - lack of basic common sense from the controllers are evident in this. This delayed the overtake process, and delayed the Coimbatore express as well. Since this is a double line, it didn't affect my train - which was already running behind schedule, by the way. As is the norm, the platforms at smaller stations like Payyanur aren't covered end-to-end.

It was a long walk in the sweltering heat to get to the rear end of the platform - my coach was the 20th in the formation of 21 coaches. This meant a really long walk - my kid was fast asleep on TW's shoulder. It was tough lugging our bags to the end of the platform. My train came in at 1134hrs - about 20 minutes behind schedule, with WAP4 #22646 of Erode shed doing the honours. The coach didn't arrive at the position it was expected to - and everybody boarding from Payyanur seemed to have been alloted the same coach. This meant a jostle to get into the train - since this coach was right next to the guard's coach, he didn't let the train leave till everybody was in. We managed to get in, and get going in two minutes - the train departed at 1136, 21 minutes behind schedule.

This train (Coimbatore-Mangalore Intercity Express) shares its rake with Ernad Express - that meant I'd travel in the same rake the next day as well, but in a different coach. By the way, my coach, D1, was WGSCZ 09616 based at Mangalore - this coach was built by Integral Coach Factory in 2009. The coach was a non-ac Second Chair Car coach - these coaches feature 3x3 seating, with seats resembling buses. Thankfully, our seats were near the door - so we got a row of seats facing each other. I always felt these 3x3 layout was really congested and usually prefer avoiding them - I'd rather pick up the normal General coach.

The train was fast from the word go - my kid woke up by now, and was enjoying her ride near the window. It was quite hot - the heat, plus the mask, made it a little too uncomfortable for us though. We did cross some trains on the way - but we were maintaining fairly good pace, and it was really difficult to note further details of the trains we crossed - I am clearly growing old! We pulled in to Kanhangad at 1202hrs - 23 minutes behind schedule. This was also a quick halt - the guard kept an eye to ensure nobody was left behind. We departed at 1204hrs - 24 minutes behind schedule now. It was an eventless run through out - I loved spotting the Bekal fort and the beach, though. We visited the same beach later in the evening as well.

We reached Kasaragod at 1221hrs - 22 minutes behind schedule, now. This train has a fairly tight schedule, and the tendency to be delayed seemed usual. The train stopped on Platform 2 - and we had to climb up the foot-over-bridge to get to Platform 1 and then exit the station. The heat and the number of bags made it a challenge, though. But I was excited to be in Kasaragod after almost a decade (I am not considering the journeys in which I passed through Kasaragod). Kasaragod is a town that seemed frozen in time - not much has changed in the town. Kasaragod presents a very unique culture - very different from the rest of the state for sure.

Please do watch this short video from this trip as well:

This was a short, sweet journey. Absolutely no-nonsense journey.

Sunup said…
Fully agree with your views on Kasargod town. I studied in LBC College of Engineering over there. It's indeed very different when compared to other towns in Kerala. Even the malayalam dialect too. During my student days, used to visit the umpteen 'local' ice-cream and fruit salad shops in that town.
3 December 2021 at 18:31:00 GMT+5:30