This train was an obvious choice - but I didn't make it too obvious either. I had looked at options before and after this train, but this train appeared to be ideal. I had some work at a place near Parassala until about 12noon. I had to travel to Trivandrum Central by road after this work - and I had to keep some buffer time to make up for traffic as well. Considering all this, the 02082 Thiruvananthapuram Central - Kannur Jan Shatabdi "Special" was the best pick. Any later train would get me quite late to Thrissur - and the next day was a working day. 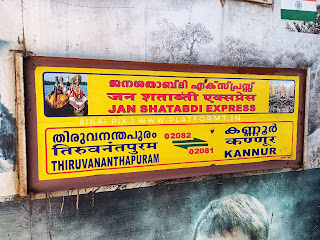 I hadn't booked a ticket, and decided to do that after I get into a bus to Trivandrum, and after I am completely sure of being able to get on this train. I booked my ticket using the IRCTC mobile application once the bus passed the main bottleneck. Indian Railway has been operating mostly fully-reserved trains of late, and most seats remained unsold until the final chart is prepared - this allows passengers book ticket using the current reservation facility. Like an icing on the cake, tickets booked through the current booking system even gives out a discount! I had my ticket ready very quickly - and as it always happens, I got to Trivandrum Central with over an hour to spare. I could've easily traveled by the earlier train - but then I got to use the time 'creatively' to capture some photos and also catch up with my friend, Jayasankar, who took the effort to travel to the station just to meet me! Thanks friend!

It was indeed a very tiring day. The scorching sun just made matters worse for me. I had picked up my lunch from the Indian Coffee House outlet at the KSRTC bus station. I headed to the platform where my train was berthed with about 10 minutes to spare for my train's departure. I headed straight off to check the locomotive - WAP7 #30349 of Royapuram Electric Loco Shed was at the helm. It was really hot out there - and I was too tired to walk till the signal to capture a good photograph (My apologies in advance to all readers who expect photographs - I was really really tired to do that). I clicked a quick one on my phone and walked back towards my coach - which was the sixth from the locomotive. My coach, C1, was a 2002 built AC "Jan" Chair Car coach. This variant of AC Chair Car coaches had large windows - a novelty those days - not any more, though. The coach was based at Trivandrum coaching depot, and appeared quite well kept.

The coach was almost full - mine was a middle seat (unfortunately). As luck would have it, the passenger who had the window seat didn't turn up, and I had the window and middle seats at my disposal. I began digging in to my lunch soon after settling down at my seat. Meanwhile, my train had departed from Thiruvananthapuram Central station - perfectly on time, at 1450hrs. The Vegetable Biryani from Indian Coffee House was quite dry, and badly needed some kind of gravy to go along. It is at best called a "Ghee Rice" or a "Veg Pulao". I had picked up a Vegetable Cutlet - which added some taste to my lunch, though.

The air-conditioning was quite effective - the coach had a very comfortable temperature. The ticket examiner came around to check tickets soon after the train had departed from Thiruvananthapuram. We quickly picked pace and set off on the journey to the northern part of Kerala. A few vendors kept appearing at frequent intervals - largely selling water bottles or packed snacks.  We slowed a little bit as we passed Kochuveli, and the picked pace quickly. We kept crossing trains at frequent intervals - I was dead tired due to the sleepless night I had the previous day, and I dozed off sometime during the journey. I woke up just as the train curved into Kollam station (1545hrs). Kollam station has a very unique location - since trains were initially operated from Shencottah side to Kollam, and the station was built around that railway line, and the line from Trivandrum came later, the line was built in such a way that trains actually go past the station, take a U-turn and then enter the station. Had they not done this, Kollam would've been a reversing point.

A few vendors entered the coach at Kollam with fresh snacks - I managed to pick a pack of Medu Vada for my evening snack, and a bottle of juice to go along. The train departed from Kollam at 1547hrs - perfectly on time. The WAP7 up ahead had quite some fun with the mostly light 18-coach load it was hauling - the train hit maximum permissible speed in no time, and we were literally flying. It was a very quick hop to Kayamkulam - we got there by 1618hrs - 4 minutes ahead of scheduled time. We departed at 1624hrs - perfectly on time. The train slowly crawled past points as it diverted to the line that goes via Kottayam. Trains going via Kottayam have a very peculiar stoppage pattern - irrespective of type of train, majority of them stop very frequently. This train is no different either - the train makes a halt approximately every 10 minutes.

We crawled in to Mavelikara by 1633hrs (a minute behind schedule) and departed a minute later. We skipped a small station in between, and made the next halt at Chengannur (1645hrs - 1 minute late). This stop was also brief, and lasted two minutes. The next halt was just 9 kilometres away, at Thiruvalla (1656hrs - 2 minutes behind schedule). This stop was also 2 minutes long. We picked some pace after Thiruvalla, and ran-through two stations, to reach Kottayam by 1724hrs (6 minutes ahead of scheduled time). Plenty of vendors came in to the coach at this time - I managed to find some more snacks and washed them down with a cup of coffee (the nostalgic railway coffee - made of very little milk or dairy whitener and plenty of sugar and water!).

We departed from Kottayam at 1735hrs - perfectly on time. This train has its longest non-stop run, in its entire journey after Kottayam - an 85 minute run to Ernakulam. This is the longest stretch without a stop, for this train. The first few kilometres after Kottayam was slow - due to track doubling works. We crossed quite a few trains in this stretch - I was too tired to go to the door and click, or even note down details. It slowly got dark as we rushed towards Ernakulam - we did slow down at times, but didn't stop anywhere. We slowed down to a crawl after Thripunithura - then slowly passed Ernakulam Marshalling Yard, and slowly entered the main line towards Thrissur. We reached Ernakulam Town station at 1837hrs - a good 23 minutes before time! The coach, more-or-less, emptied out here. Food vendors kept the scene active - dinner items were on sale now.

During the wait at Ernakulam town, we were overtaken by the Trivandrum-Nizamuddin Express (that train had departed 20 minutes before my train from Trivandrum). A freight train was also allowed ahead of us. We departed from Ernakulam Town station at 1905hrs - 2 minutes behind schedule. The freighter and the Nizamuddin express ahead slowed down our progress - we had to crawl for most part of the journey. The train made a brief halt at Alwaye (1925hrs) due to lack of section clearance. The crawl continued for most part of the journey - we made another brief halt at Ollur (perhaps because Nizamuddin Express was occupying the platform at Thrissur). We finally rolled in to Thrissur at 2025hrs - 7 minutes behind schedule. The Jan Shatabdi is one of the fastest options on the route - with a run time of about 5 hours and 35 minutes.

Overall: 9.75/10
It was a simple, no-nonsense journey. The train could've made it on time at Thrissur if not for the operations control sending a slower train ahead. We had spent a lot of time cooling heels at different stations due to before-time arrivals. I look forward to repeating the journey again, in the future! Overall, the journey was good.
railfanning Travelling