The biggest casualty of the pandemic has been travel. The travel industry took, perhaps, the worst hit and was slowing limping back when the virus changed its mind. Travel has been on an all time low since March 2020, when people were forced to return to their hometowns. Life took a different track ever since. With work shifting out of office, and people remaining indoors for most of the time, the number of journeys came down.

I thought of penning down my experiences of some trips I made during the "lull" before the pandemic storm. Some of these journeys were "without purpose" - I'd call it so, because the travel in itself was the purpose. Before somebody points this out, I, personally, do not recommend travelling without a purpose. The more we stay safe, the lower would be the spread of this nasty virus. I had taken all precautions including wearing a high-quality mask throughout the journey, sanitizing my hands frequently and ensuring as much distancing as possible.

Thoroughly tired, drenched in my own sweat, I slowly walked in to Shoranur railway station. I had started from home in the morning - traveled by bus from my hometown to Thrissur, then to Perumbilavu, later to Pattambi and from there to Shoranur. I had planned to have my lunch at Shoranur - but as luck would have it, I couldn't find any open restaurants here. I thought of buying something from the station - the board at the entrance said my train would depart from Platform 6. The Vegetarian refreshment room at Shoranur was located at Platform 2 - I headed straight there to buy something - the guys at the counter said they had run out of food! It seems they prepared very little food since sales was lower than usual.

I headed to Platform 6 from where my train would depart - I thought of buying some packaged food from a stall - I managed to find some Uzhunnu Vada (Medu Vada, or fried fritters made of black gram) at a stall on the platform. I paired it with an aerated beverage. I headed to my coach in the train - occupied a window seat on the right side (my reserved seat was on the other side) - the fans in the coach were quite strong and blew winds on to seats. I slowly finished my lunch and washed it down with the soda I had purchased.

This was my first experience in a non-airconditioned LHB coach. Some of you might have guessed - I was traveling on Venad Express. Venad Express is the only train in Kerala to have received an intercity LHB consist. Non-AC "Second Class" Chair cars and AC Chair Cars made up this consist. The non-ac Chair car coaches had seats arranged in a 3x3 fashion - the seats offered limited recline and  acres of leg room! The seats were wide enough, but the window frame intruded quite into my shoulder space. Since LHB coaches were originally designed as AC coaches, and due to the fact that these non-self-generating coaches could afford higher operating seats, these coaches had an "improved" version of openable windows. In order to achieve this, the window frame had to be made wider - that is because, they had to have sliding glasses as well as sliding shutters - at the centre of each window, there has to be space to hold 3 pieces of glasses and 3 pieces of shutter - the end result is an extremely wide window structure. I am really sorry that I couldn't capture photos of this structure to explain it better. This fat structure ate into my shoulder space - the discomfort was lower since I was the only passenger in the entire row (rather, there were just 3-4 passengers in the entire coach). It could have been terribly congested had there been another passenger next to me. 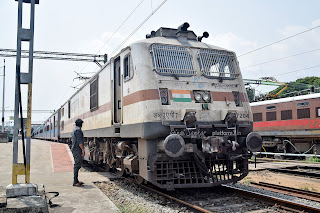 We started off from Shoranur perfectly on time - with hardly any traffic, trains seem to be quite punctual these days! The WAP7 at the helm of affairs made merry of the light load behind - the consist is 20+ coaches long, but most coaches had occupancy in single digits, making it appear like hauling an empty rake! We slowly picked pace as the rake cleared Bharatapuzha bridge and entered in to Trivandrum division. The Shoranur-Thrissur section has a maximum permissible speed of only 85kmph - and there as some track maintenance work en route, slowing us a little bit. The Shoranur-Thrissur stretch is windy and goes around small hillocks. The line rolls at different levels at places, and cuts through plenty of rock cuttings. Travels between Shoranur and Thrissur are always filled with emotions and memories.

Back in early 2000s, when, I, as a college kid, used to travel to Kerala during vacations (or visits for some vague reason), I regularly used to travel at the door from Shoranur to Thrissur - its always excitement of reaching my home town, with a lot of emotions of the train journey coming to an end. I knew the route like the back of my hand, back then, and knew every curve on the route. Journeys by train came down to a trickle ever since I moved to Bengaluru, in 2008. This journey by Venad express was a rehash of all my old memories of traveling by this route.

The train stopped at Wadakkenchery - the only halt on the way. I did not notice the time, but I am sure we weren't delayed. A few passengers joined at Wadakkenchery. I vaguely remember the train crossing the Nizamuddin bound Mangala express on the way. I moved to the door as the train crossed  Punkunnam. We slowed down as we approached the home signal at Thrissur - the train still rolled in to the station at quite some speed, for a perfectly on time arrival. There is only one exit point - thanks to the pandemic. Since it was an intra-state train, there was no checking or verification of entry paperwork.

I am not rating the journey since the travel was the purpose! Do watch my video from this journey to experience the interiors of the coach!