on August 02, 2019
The decision to book this bus was easy - very easy after I was told by the examination centre that the examination would last only half a day. I didn't fancy sitting idle in the hotel room until night, and decided to pick an afternoon bus to return back to Bangalore. There was only one afternoon bus from Dharwad - that was the Belagavi-Bengaluru-Chennai service of NWKRTC. The other feasible option was a Hubli-Bengaluru bus - but that would mean traveling to Hubli and change buses. I booked the Belagavi-Chennai bus without much confusions - direct journey from Dharwad, and the fact that I'd get a new Volvo B11R were factors that contributed to the decision.

July 3, 2019:
I had completed my examination work quite early - but paper works dragged on for quite a while. The conductor called up at around 1215hrs to confirm that I would be travelling and to update me that I should board from the bus station, and not the point I had selected - he updated me that the road towards the place was closed and the bus would have to take a longer detour to get there, and would delay - I didn't mind, and accepted his request. I quickly checked with him if the bus was on time - and he replied in affirmative. This change meant I had to get into the bus 10 minutes earlier - I updated this information to the people at the examination centre. They quickly arranged a person to drop me at the bus station - I also wanted to purchase some Dharwad Peda on the way. The guy stopped at a famous outlet for me, and dropped me at the bus station by around 1300hrs - 15 minutes to go for my bus.

I hadn't taken my lunch - I was sure the bus would stop for lunch, but decided to have something very light to take care until then. After a very light lunch from the restaurant at the bus station, I headed in search of the platform where my bus would arrive. Some construction works were happening in the bus station, and signages were removed. The staff helped me get to the correct place. The bus came in at 1318hrs - about 3 minutes behind schedule. Boarding was quick - the conductor coordinated that really well. But then, you'd always have a late latif - we had one. We got all on board, and got moving by 1324hrs. The driver quickly got on to the 'bypass' - I expected the bus driver to be quick - but, alas! - the bus wouldn't exceed 75kmph! But, he didn't have to perform heroics - we maintained time, and got to Hubli new CBS by 1359hrs - a minute before time, actually!


Nobody got in from here - the conductor went to get the timings recorded on his waybill and returned to the bus - we got moving by 1402hrs. We headed to the Old Central Bus station next. There was quite a lot of traffic on the way. We got to the old CBS by 1414hrs - and parked right outside the 'Executive Lounge'. I liked this facility - the bus didn't go to the normal platforms. Most of the passengers boarded here - we got moving by 1421hrs - 6 minutes behind schedule. The bus got to the highway soon later. I was on the look out for the VRL Headoffice in Varur - the workshop facility is humongous, and there were dozens of older buses parked there ready for sale. 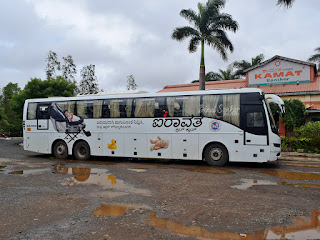 The bus pulled in to Hotel Kamat past Varur at 1456hrs for a late 'lunch'. I am not a fan of the Kamat franchise - but I was hopeful of some good north karnataka styled food. I rushed to the restaurant - the menu card listed out quite some combinations and different style of meals. I picked the North Karnataka meal - which had Jowar roti (Jolada Roti) among some typical accompaniments. I loved the food, and enjoyed the meal. I finished my meal quite early since I wanted to click some pictures of the bus - the bus had a very fancy number as well - KA-22-F-2222! I finished clicking the bus and remained outside till the crew returned after their lunch. We finally departed at 1524hrs.

The bus was mostly slow - maintaining speeds in the range of 80kmph most of the time. The crew showed no hurry to get to Bangalore on time. I was really worried if we'd get overtaken by the next bus! I was a little tired, and dozed off for a while in the meantime. I slept for a while, and then tuned to a movie on my phone. The AV system in the bus wasn't used (the crew said it wasn't working). The bus stopped on Davanagere bypass (1736hrs) to drop a passenger and continued. I slept for a while more, and woke up just as we were entering Chitradurga bypass. One point worth noting here was that the pace of the bus was severely hampered by the six-laning works happening in most parts of the Hubli-Chitradurga highway. There were too many diversions and it was impossible to maintain pace in the entire stretch.

The bus pulled in to Hotel Adithya, near Hiriyur for a quick tea break (1857hrs). A 10-minute break was announced at the crew got off the bus. And, they were quick about the break as well. We started off from the place at 1913hrs - 16 minutes after we stopped! That was a very quick break by KSRTC standards. There were no diversions after Chitradurga, and this actually meant better pace. The driver was quick after the break, and I had hopes of the bus getting to Bengaluru without much of a delay. The bus stopped on Tumkur bypass (2033hrs) to drop a passenger. A delayed arrival was imminent, but the performance after the tea break was really good. I got off the bus at Nagasandra toll gate at 2129hrs - about 30 minutes before Majestic. This means a 45 minute delay for the bus.

Remarks: The bus, KA-22-F-2222, of Belagavi-1 depot had clocked about 4.2 Lakh kilometres. The bus looked well kept - there were some scars, but still in good shape. The interiors were really clean and well kept. The crew members were great - very polite as well. The driving style was initially dull and boring - but things got better after Chitradurga. Although the bus was delayed, the run time of 8 hours and 5 minutes seemed good for a day service bus.

Will I take this service again? I would, If I have another opportunity.
Busfanning