Kalaburagi to Bengaluru by the ubiquitous 'Solapur' Express

on July 27, 2019
I didn't look at a lot of options when I booked this ticket. I had to be Bengaluru early, since I had to officiate an examination in campus that day. This requirement ruled out buses - since most of them had scheduled arrivals only around 0800hrs. The only train that made sense among all the options was the popular 'Solapur' Express - now called the Solapur-Hassan Express, this train is very popular among passengers on this route. Getting tickets on this train is always a premium - this day was no different either. I got a waitlisted ticket in AC 3-Tier. The waitlist did not move for quite a few days after booking - but it moved straight to confirmed a few days before the journey.

June 27, 2019:
I always find it difficult to find a good place to eat during my visits to Gulbarga - may be I search it the wrong way, but I hardly get a good restaurant. This time around, Google listed me more options, and I picked one restaurant that served good North Karnataka styled food - the Gurudatta Bhojanalaya. The restaurant served awesome food - I loved the jowar roti and the dishes that were served along with it. The meal was sumptuous and filling - it was finger licking delicious for sure! It was fairly long walk from my accommodation, and then again till the railway station.

The railway station was crowded as usual - I headed to the waiting room first, which was quite claustrophobic. I left the waiting room quickly, and opted to wait on the platform instead. They hadn't updated which platform my train would arrive yet, but based on my previous experience, I decided to wait on Platform 1 itself. There were two departures before my train - one was an express train towards Solapur, and another was the passenger train (local shuttle train) to Raichur.

My train, the 11311 Solapur-Hassan Express, usually sees a lot of VIP traffic - especially politicians and bureaucrats travelling to the state headquarter (Bengaluru) for official work. The train rolled in to Platform 1, as usual, at 2107hrs (7 minutes behind schedule) with WDG4 #70358 of an unknown shed (Hubli?). My seat was confirmed in B1 - a 2011 built coach (WGACCN #11124) based at Solapur. The coach appeared tired at the first look itself - and I found more signs of that later. For some reason, I always get side upper berths when travelling along. The berth is small for my frame - but then it has the convenience that I could sleep whenever I wanted. 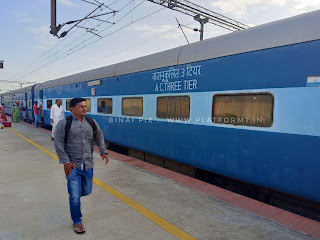 India was playing a match in the Cricket World Cup that day - most passengers were hooked to their mobiles getting updates about the match. The internet revolution in India, driven by Jio, moved people from radio sets to their mobile phones, and from hooking up to scoreboard to live streaming! I was tuned to the scorecard since I wanted to conserve battery on my phone. In the meantime, the train had departed from Gulbarga (2114hrs). It made a quick stop at Shahabad (2141hrs), and then rolled into Wadi Junction (2155hrs). This is a major station - a station where the train moves from Central Railway to South Central Railway. We started moving from there at 2202hrs - 2 minutes behind schedule. Markings near the exit gate showed that the coach was due to a period overhaul at the end of the month - explaining why the coach appeared tired.

I badly wanted to sleep, and moved to my berth soon later. The train had rolled into Yadgir by the time I set my berth to sleep. The train had started moving by the time I slept. I slept fairly well that night. I had set an alarm for early morning - in time for arrival at Yelahanka. Although Yeshwantpur is closer to my home, I prefer alighting at Yelahanka since that helps me reach home faster than getting off at Yeshwantpur. I got up when the alarm went off - but we were quite away from Yelahanka! We were still at Makalidurg - close to an hour to go. The train rolled into Yelahanka at 0713hrs - about 39 minutes behind schedule.

Was a good journey. The overall ride was very comfortable. The bedroll and blankets provided were clean and fresh. The coach was badly in need of an overhaul (was due for it) - the interiors were dull and dim. It was a good journey, and I do look forward to repeating it.
railfanning