Bangalore to Thrissur: on the new LHB-fied Island Express

on July 07, 2019
I have never considered trains as an option while traveling to Kerala - with a string of travels lined up over the year, I was forced to look at trains as a viable alternative. I had to travel to Kerala with family at quite a short notice - I had to choose between a train or a flight - the latter was not an option due to the fares and some uncertainties over the number of people travelling. I finally picked the train - the iconic Island express was preferred. Once the sole option for people traveling from Kerala to Bengaluru - although multiple options exist now, this train is still among the most preferred and runs long waiting lists most of the time. I did manage to get confirmed tickets for this journey, but except one, none of the berths were what we would've preferred.

I was quite excited about the journey, for multiple reasons - one, I was taking the Island express; two, I was taking a train to my hometown after a very long time; and, three, this would be a ride in an LHB rake after some time (barring the Humsafar express).

June 22, 2019:
We (I and TW) had planned to leave home by around 1800hrs - but then, like everytime, we ended up being delayed. We managed to get an Uber, and start off from home by 1827hrs. I was continuously tracking the traffic situation on road, and hoped nothing untoward happened. The train would depart at 2000hrs, and we were in the middle of very unpredictable evening traffic. My mother, who was accompanying us, was to join us at the City railway station, and she was coming in from the other side of the city - She made it to the railway station by the time we had traveled in the first 10% of the distance! Luck favoured, and there was very little traffic for most of the distance. We got to the City railway station, ah, I mean, Krantiveera Sangolli Rayanna Station Bengaluru, by about 1930hrs.

The train was berthed in Platform 2 - my mom was waiting outside our coach, and she had given an indication to the position of our coach. We had quite some pieces of baggage - TW was going home for a long stay, and she had lots of things to carry. Our coach, B3, was the 19th from the locomotive - the lazy me didn't want to walk that long to check what loco would be powering the rake. But I did see the next morning that it was a WAP7 - didn't check the shed or number, though. Although the lights were on inside the coach, the AC was not yet turned on - It wasn't turned on until about 5 minutes before scheduled departure. 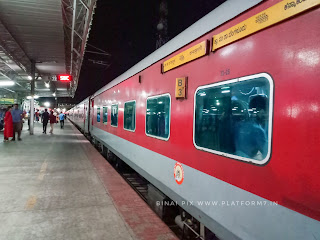 The coach was more or less empty at that point of time. Although i had requested for two lower, one middle and one upper berth at the time of reservation - I ended up with three upper and one middle berths! Of the four, I had cancelled one. Both my mom and TW needed lower berths. We had the herculean task of exchanging berths and getting the right berths. There was no movement even as the clock ticked past 2000hrs. We started from SBC only at 2036hrs - thirty-six minutes behind schedule. The train slowly crawled out of the station. My mom had brought dinner for us from home - it was now time to relish some awesome home cooked food. As we relished our dinner, the train slowly crawled into Bengaluru Cantonment station (2049hrs) - a few more passengers joined here, but majority were yet to. We started off at 2051hrs.

Soon afterwards, the TTE came around and checked tickets - I requested him for a berth exchange - he asked me to wait till he clears the RAC passengers. We continued rolling - making a brief halt, for unknown reasons, at Bengaluru East (outer) though. We got to Krishnarajapuram station by 2124hrs - the coach filled here. Almost all the seats were occupied now, and we got moving by 2126hrs. Our berth exchange problem was solved shortly thereafter - we retained one of our upper berths, and got two lower berths in exchange. All of us headed to our berths soon later - the train is scheduled to arrive in Thrissur (our destination) early morning, and we had to get some sleep until then. I was getting on to an upper berth after quite some time - it was C-O-L-D up there! The berth was comfortable - the roof was well scooped out to give some breathing space, and it felt less claustrophobic as compared to the normal ICF built coaches.

I dozed off quite quickly - I did wake up multiple times in between - more so due to the cold air from the air vents, which were directly on me. I had left an alarm for 0515hrs, giving enough time to snooze my alarm, and still be awake to alight at Thrissur. The train was stationary when it stopped - I checked the location on GMaps, and found that we were only at Palakkad then. My throat was chocked due to the temperature, and I wanted to get off the berth badly - I did doze off for a while more. I got off my berth by about 0545hrs - the train was at Ottapalam then. It left Ottapalam at 0546hrs. TW was also awake by now.

I headed to the door after Ottapalam, to see the train cross Bharathapuzha - a sight that I always love watching. It was drizzling outside, and was quite cold. We got to Wadakkencherry by 0619hrs, and departed by 0620hrs - about 55 minutes behind schedule now. We had to hire an Uber from Thrissur, and I was already on the look out for cabs - getting one after the train reaches there is difficult, and I had to book a vehicle before we got to the station. I confirmed my booking as we passed Poonkunnam ( the station just before Thrissur). The train rolled in to Thrissur station by 0638hrs - 51 minutes behind schedule now.

Journey in a Nutshell:
Train Number: 16526 KSR Bengaluru - Kanniyakumari 'Island' Express
Loco link: Did not check, but was a WAP-7
Coach: B3, LWACCN 182083/C built by ICF, Chennai in October 2018. Based at Baiyyappanahalli.

Was a good journey. This was my first in an ICF built LHB coach - the interiors were good, although the finish was lacking. The overall ride was very comfortable - the berth was appropriately sized and cushioned. The bedroll and blankets provided were clean and fresh. It was a good journey, and I do look forward to repeating it.
railfanning